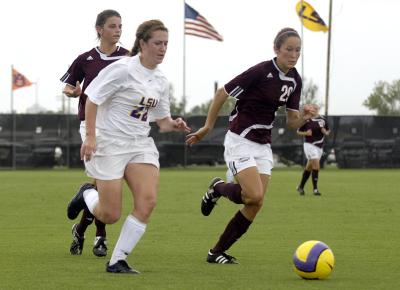 NORMAN, Okla. — The 11th-ranked LSU soccer team took a 1-0 lead at the 5:19 mark and never looked back as it cruised to a 4-0 victory over the Oklahoma Sooners on Friday at the OU Soccer Complex in their final non-conference match before the start of league play.

The Tigers (6-0) are pushing for a spot among the nation’s Top 10 teams as they remained perfect on the season and set a school record with their sixth straight win to open the year.

The Sooners dropped their fifth straight decision and fell to 1-7 on the season as they are also set to open conference play next weekend. LSU remains unbeaten in the all-time series as it improves to 2-0-1 against the Sooners in a series that dates back to the 1996 season.

“I’m really pleased with the intensity our kids showed from the opening kickoff,” said LSU head coach Brian Lee. “This is exactly the kind of performance we were hoping to see from our team, especially with this being our final match before the start of SEC play next weekend. I thought we were outstanding in the attack and kept the pressure on their back line throughout the game.”

Senior captain Roslyn Jones put the Tigers on top in the sixth minute of the match with her fourth goal of the season, rifling a shot off the crossbar and into the net from 12 yards in front of goal.

The play was set up when junior forward Rachel Yepez controlled a slotted through ball at the top of the penalty area and nearly beat Oklahoma goalkeeper Lisa Jett one-on-one, but Jett raced off her line to cut off the angle and made a diving save. Yepez controlled the rebound and centered a pass to Jones in the center of the area when the senior fired the ball into an empty net.

LSU struck again in the 22nd minute of play when junior Melissa Clarke scored her second goal of the season on an unassisted strike from just inside the top of the penalty box.

Clarke scored with a shot inside the left post past a diving keeper following a brilliant 40-yard run through the Sooner defense. After collecting a pass near the midfield stripe and dribbling between a pair of Sooner midfielders, Clarke drew Oklahoma’s back line to the left side of the penalty area before cutting back against the flow of play and blasting an uncontested shot off her right foot.

But the Tigers were not content with a 2-0 lead, and Tulsa native Amanda Carreno put the game out of reach with her second goal of the season with just 40 seconds remaining in the half to give LSU a commanding three-goal advantage heading into the halftime break.

Carreno, who came onto the pitch in place of Jones late in the half, fired a one-timer into the back of the net from the penalty spot following an end-line cross off the foot of Malorie Rutledge.

“I thought it was big for us to get that first goal so early in the game, but coming back and scoring the second goal and taking a 2-0 lead seemed to loosen it up and we were able to create a number of great chances the rest of the way,” Lee said. “I’m very proud of the intensity shown by the kids tonight, and that is something that we will need week in and week out with SEC play coming up.”

And if there was ever any doubt in the outcome of the match, freshman Kellie Murphy scored her first career goal in the 67th minute of the contest following an outstanding run down the left flank. Murphy collected a loose ball on the left wing and dribbled past a pair of defenders in the left side of the area before taking a touch toward the spot getting off a shot from 12 yards out.

Freshman goalkeeper Mo Isom enjoyed another outstanding performance in goal for the Tigers as she improved to 6-0 with her fourth shutout on the year, while lowering her goals against average to 0.33 to lead all goalkeepers in the Southeastern Conference.

Despite only outshooting the Sooners by a 15-14 margin in the game, LSU dominated with a 12-2 edge in shots on goal with Oklahoma leading 3-1 in corner kicks.

The Tigers will return to the pitch next weekend as they continue their five-game road swing with the start of Southeastern Conference play. LSU will open defense of its SEC West crown on Sept. 26 with a trip to Starkville, Miss., to take on Mississippi State at 7 p.m. before traveling to Oxford on Sept. 28 to battle division rival Ole Miss with kickoff set for 1 p.m.