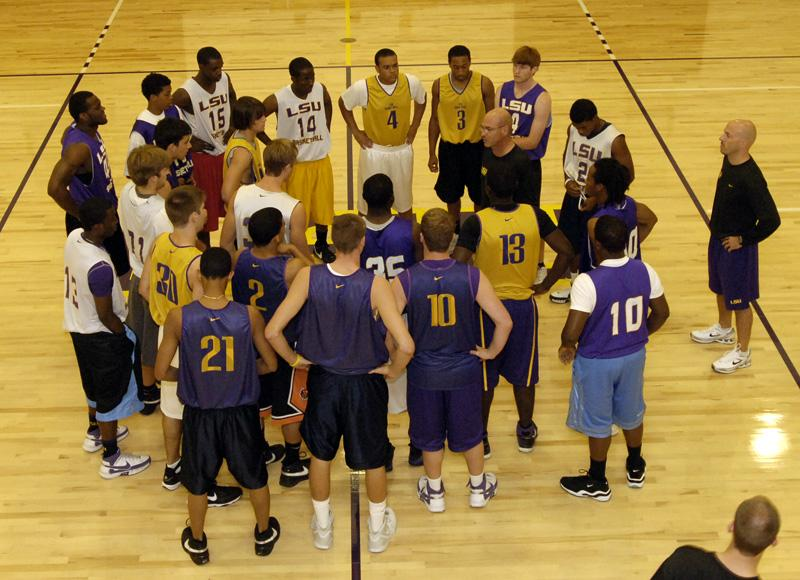 Trent Johnson could quickly see the difference in walk-on tryouts this past week at LSU and those at his previous head coaching stops at Stanford and Nevada.

“Going back to Stanford we would have four engineers and doctor out there and none of them could play so I like the talent pool I’m looking at right here which is similar to what I had at Nevada,” he joked with some of the local media during the tryouts.

But Johnson knows that the walk-on position has paid benefits for him in the past.

“The walk-on position is the guy that helps you in practice every day. I’ve been very fortunate. Chris Bobel, who is in charge of basketball operations on our staff here at LSU, was a walk-on at Stanford and also Kenny Brown who two years ago was the Chevrolet Player of the Game against Louisville in the first round. There is an opportunity for a guy to participate and represent LSU in a very sound fashion.”

Just a month away from the first official practice date, the night of Oct. 17, 22 students went through the two-plus hours of meetings and workout under the direction of Assistant Coach Keith Richard.  Even though this isn’t the first walk-on tryout Johnson has conducted, he feels the tryouts can have a special meaning here at LSU.

“We’ve got 22 men that are here and getting after it and we’re looking to find someone that can help our basketball team,” said Johnson. “We’ve got 13 guys on scholarship and we’ll keep maybe one, maybe two men that we see out here. It’s a unique experience. It’s something that we want to make special here at LSU. Brandon Landry and Jack Warner, two young men who own the Walk-On Restaurant (after walking on to the LSU basketball team), have done a lot for LSU basketball and lot for LSU and so I think it’s very fitting that we make this an annual event. Hopefully we can find a couple of guys that have the passion to compete like (Jack and Brandon) did when they were here at LSU.

“These young men that are selected are going to be a part of what I think will be a very special year at LSU because it is the 100th anniversary celebration of LSU basketball.”

Landry, who with Warner were among those watching the tryouts, remember his walk-on tryout when he didn’t make it initially.

“I tried out and I got cut,” said Landry of his walk-on experience in 1997. “Probably two weeks into the season, a couple of guys got hurt and a couple others left the team and they called me back. I tried out that year. They actually took Jeremy Comeaux from the tryouts. I think they had three or four games before they called me to come practice with them. The team was limited on players so I got to travel with them. My first road trip was when DeJuan Collins hit the long shot to beat Florida in Gainesville. I thought this was going to be pretty fun.

“Jack and I were just talking as we were watching that we’d give it all up to go out and do it all over again. Those were the days. Like Coach has said, it happens so quickly. Before you know it, it’s over with.  I remember the smell of the dungeon, the smell of the locker room. You come in there and you feel like you want to take a nap because you’ve been practicing so hard every day. This definitely brings back some memories. I used to love in the summer, getting out here and we’d run 5-of-5 until you couldn’t stand up anymore. I loved it.”

The coaching staff was planning to review the tape of the walk-on session and will make a decision in the near future regarding who will join the team for the 2008-09 season.

The 13 scholarship players have been preparing for the official opening of pre-season practice under the direction of the coaching staff and basketball strength and conditioning coordinator Juan Pablo Reggiardo.

“Right now we are going through individual workouts with the players ? three 40-minute sessions, that’s all you are allowed by the NCAA and they are lifting four days a week,” said Johnson. “They are really concentrating on their academics. This is the time of the year where you have to get as much ahead as possible and get in as good a shape as possible. This group, for the most part, has done a good job. Granted, we haven’t been 5-of-5 or 3-of-3 so everything they’ve done is 5-on-0 or in groups of four. So we’ve got a long way to go, but I like the progress we are making. Hopefully we can continue that. I’m encouraged because of their commitment to team and to buying into what we are asking them to do. But I’m also not blind to the fact that it is going to get a lot tougher.”

Predictions Starting To Come Out

Senior Marcus Thornton is one of three SEC players on the regional cover for the conference in the Athlon basketball magazine that is on local magazine shelves. The LSU three-point shooter is joined by Jarvis Varnado of Mississippi State and Chris Warren of Ole Miss. One of the 10 national items to watch that Athlon selected at No. 9 was “The Wild (SEC) West.”

Quoting Athlon: “The SEC West is annually the most difficult division or league to project among the high-major conferences. In fact ? and we probably should publicize this ? Athlon Sports has only correctly predicted the division winner one time in the past six seasons (the 2005-06 LSU Tigers). This year, the division could be as wide open as ever. You could make a compelling case for almost every team to finish first (or last).”

In that crazy SEC West, Athlon’s sees the Tigers as second in the West, with Mitchell and Thornton both second team All-SEC preseason selections and center Chris Johnson a third-team All-SEC preseason choice. Johnson is also picked as the most underrated player in the league by the magazine.

Of their player rankings, junior Tasmin Mitchell returns after his ankle surgery to find himself ranked third nationally among “Inside-Out” players behind Tyler Smith of Tennessee and Damion James of Texas. Mitchell and Thornton are both selected by Athlon’s as pre-season honorable mention All-Americans.

In the magazine, Coach Johnson says: “We have a long way to go in terms of the implementation of my beliefs ? and make sure there is an emphasis on we instead of me. From a basketball philosophy standpoint, we’ll focus on defending, rebounding, taking care of the ball and playing with a sense of urgency.”

The magazine in its final analysis states: “Johnson has his work cut out, but he has a veteran team that should be receptive to change after the program’s first losing season since 2000-01. If LSU’s players embrace Johnson’s style and develop the team chemistry that never emerged last season, the Tigers have a chance to compete in the SEC Western Division and return to the NCAA Tournament for the first time since the 2006 Final Four run.”

Rivals.com has also previewed the LSU team, ranking them No. 39 in the country in the pre-season. Writer Bob McClellan, the college basketball editor for Rivals.com, in his season outlook of the Tigers makes the following conclusion: “The soon the Tiger’s buy in to what (Trent Johnson is) preaching, the better off they’ll be. Expect a more disciplined, better-conditioned team. With a school-record 21 home games and a weak SEC West, the Tigers are positioned for a 20-win season and an NCAA bid.

Johnson Likes What He Sees

After watching a couple of football games in Baton Rouge, Johnson really likes what he sees.

“Since I’ve been here, it’s been absolutely amazing the commitment from the fan base in the state of Louisiana, the commitment from LSU and these students. I’ve been to two football games and the second one last week I had the opportunity to walk around and get a really good feel. It’s amazing. Playing North Texas, a team that we were completely better than, people were in every down, every play they were cheering. So the element of passion, the commitment here is absolutely the best I’ve ever been around. When I say around, I’m not talking about the schools that I’ve been worked at in the past, but some of the leagues I’ve been in and the places I’ve observed. So, this student base, the fan base, there’s no question it’s important.

“But there again,  we have to do our part as a basketball team to make sure we have a viable product on the floor that competes at a high level and are doing the right things the right way.”

When fans get back into the Maravich Center to watch basketball this season, they will notice that there are now two three-point lines on the floor as the men’s basketball committee will go with a line that is one foot further back than the original three-point line that was established prior to the 1986-87 season at 19 feet, 9 inches.

The new three-point line is 20 feet, 9 inches all the way around the basket. But the women’s committee has elected to leave things as they were at 19-9, thus the two different lines on the court. At one point the committee discussed going with one thick black line that would have meant behind the line was good for a men’s three point attempt and on the line was good for a women’s attempt. But the NCAA decided that two lines would probably cause less confusion for officials trying to referee the line if they were separated.

It will be interesting to see what changes, if any, there are in the three-point percentages with the new line.

The Final Word From Coach Johnson

“There are certain individuals on this team (LSU) that there are high expectations for. Like I told them, we all need to enjoy the process because it is a journey. Enjoy trying to get better every day and just move forward. Don’t worry about what somebody else is saying regarding expectations from anybody across the country. We just need to get better and enjoy this as college basketball and every team  I’ve been affiliated with that’s all I’ve dwelled on is get better today and worry about tomorrow later.”