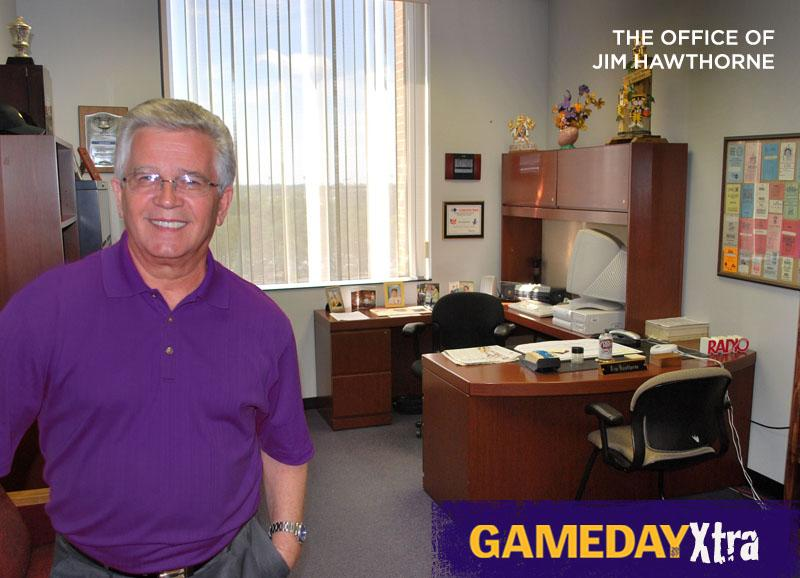 In each football GameDay program of the 2008 season, LSU features office tours from the athletics complex. A visit to Hawthorne’s office provides a glimpse at the man who has immortalized in words some of the greatest moments in LSU athletics history.

View a few of these images described below and take a look at the full photo gallery.

Full Court Press
Hawthorne displays a framed set of press credentials near his desk, representing some of the most significant events he has described for LSU fans. One of his most cherished memories is that of the men’s basketball Final Four in 1981, when coach Dale Brown led the Tigers to the national semifinals in Philadelphia.

Alma Mater
Hawthorne, an alumnus of Northwestern State University in Natchitoches, La., was presented in 2003 with “The Nth Degree,” an award given to alumni who bring distinction to the school. He received the honor prior to the LSU-Northwestern State baseball game on the NSU campus.

Autobiography
Hawthorne authored a book in 2006 entitled The Man Behind the Voice. It contains Hawthorne’s recollections of his work as LSU’s announcer, and it offers a look at some of the people and events that impacted his personal and professional lives.

Role Model
Hawthorne was honored by the All-America Football Foundation in 2004 with the Lindsey Nelson Outstanding Sportscaster Award. Nelson, the legendary CBS Sports and New York Mets announcer, was greatly admired by Hawthorne. “He was one of my idols growing up; I thought he was the best in the world,” Hawthorne says. “I had the chance to meet him a couple of times, and it was a great thrill.”

Boom Box
Hawthorne describes this piece of equipment as “LSU’s first production studio.” He used it in the mid-1980s to record and produce interviews and commercial spots for the broadcasts. Today, Hawthorne operates in a modern production studio ? located next door to his office ? from which all LSU broadcasts originate.