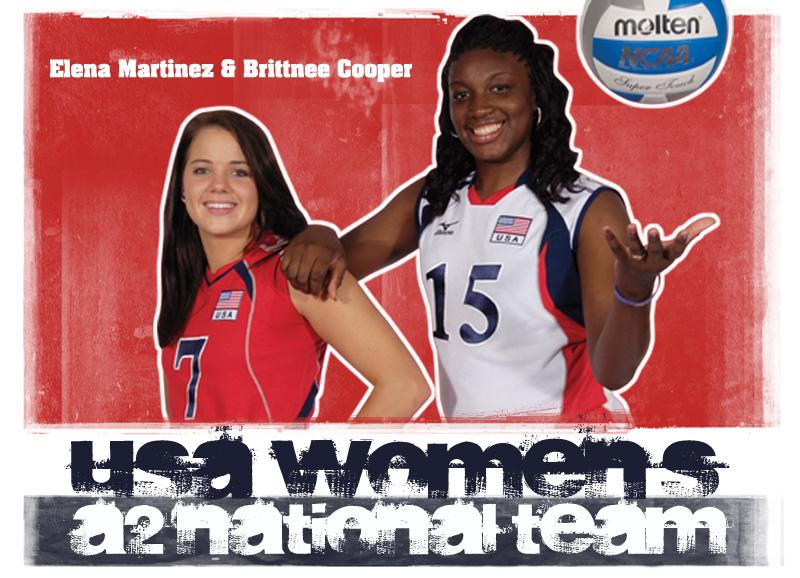 BATON ROUGE ? Every athlete tries to learn something new or improve her game during the offseason. For LSU volleyball senior Elena Martinez and junior Brittnee Cooper, that improvement came from playing on the 2008 USA Volleyball A2 National team with and against some of the nation’s best collegiate volleyball players.

“It was good because it was high rep. We had a lot of two-a-day and three-a-day practices and it was a different type of coaching than I’m used to so it gave me a different outlook on the game,” Martinez said.

The A2 team was split into two teams of 11 for competition — Red and Blue — with Martinez and Cooper both selected to the Red team. After two weeks of practice and intrasquad scrimmaging, both teams competed in the USA Adult National Championship in Atlanta last May. Both teams reached the semifinals of the tournament, but Martinez and Cooper’s Red team was the only USA-sponsored team to reach the finals, where they defeated the University of Washington, a top-10 team from last season.

Martinez and Cooper were able to take away more than a championship from this offseason’s experience, as both have noticed improvement in their games so far this year.

“I could definitely tell a difference, I see the court a little bit differently and I was able to cover more ground than I used to, and I’ve developed into a more versatile and efficient passer,” Martinez said.

“I developed a cutback shot,” Cooper added. “At first I could only hit right, and now I’m able to cut back and hit the setter with the ball much easier.”

Head coach Fran Flory has also noticed the improvement and a new motivation for both players.

“I think Elena embraced the opportunity and did a tremendous job. She has exceeded my expectations already to this point,” Flory said of Martinez, last season’s SEC Defensive Player of the Year, “but also I think it served to motivate both of them further, and got them to understand that maybe one day they could wear USA across their chest and represent their country, not just the university.”

Being one of only five other NCAA programs to boast two players on the A2 team, Coach Flory is very proud of the recognition and experience Martinez and Cooper received.

“It couldn’t have been better for our program in terms of people understanding that those are the types of athletes that play at LSU.”

Martinez and Cooper will take that big game experience on the road this weekend as the team opens SEC play Friday at South Carolina and Sunday at No. 11 Florida.