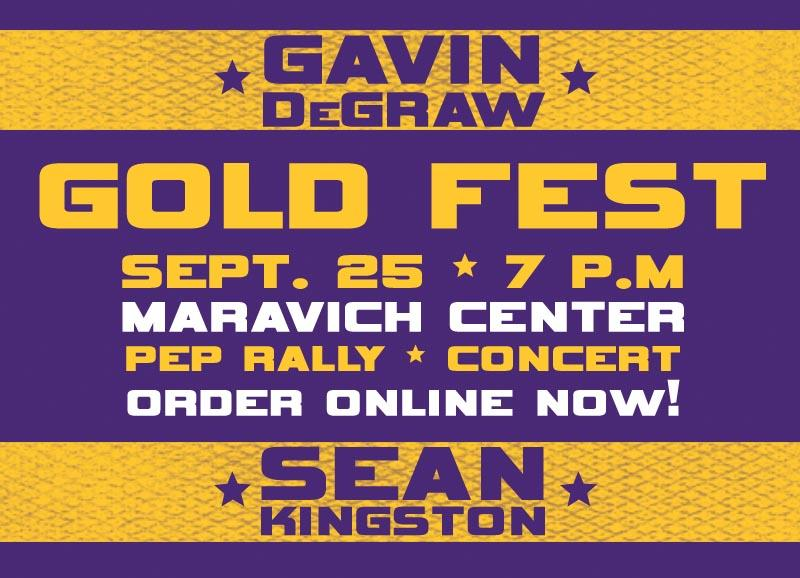 BATON ROUGE — Join LSU head coach Les Miles, Mike the Tiger, the LSU cheerleaders and Tiger Girls at Gold Fest on Thursday, Sept. 25, at 7 p.m. in the Pete Maravich Assembly Center in advance of the Tiger football team kicking off the Southeastern Conference home schedule that Saturday in Tiger Stadium.

Gold Fest, which was originally scheduled to be a part of LSU Homecoming 2008 before Hurricane Gustav forced the rescheduling of Homecoming festivities to Nov. 9-15, features a powerhouse concert by two of today’s hottest musical stars, hip-hop artist Sean Kingston and singer-songwriter Gavin DeGraw. Fans are also encouraged to wear gold to the Mississippi State game that Saturday to amp up the excitement as LSU attempts to defend its BCS National Championship.

Sean Kingston’s cut, “Beautiful Girls,” made history with one of the fastest ascents up the charts ever. Following that, the singer/rapper scored two more top 10 hits including “Me Love” and “Take You There.” His blend of hip hop, reggae, pop and doo-wop creates a refreshing musical style.

The 18-year-old Kingston prefers to use creativity instead of profanity in his songwriting. He has sold more than three million digital singles, more than three million ringtones and has toured with artists like Gwen Stefani, Chris Brown and Kelly Clarkson. Kingston was also featured on Natasha Bedingfield’s hit “Love Like This.” In fact, his own “Take You There” and “Love Like This” climbed the radio and iTunes charts together giving him back-to-back hits in January.

Gavin DeGraw is a talent who, in just a few years, has become one of today’s premier singer-songwriters. Selling more than a million copies and earning platinum certification, his first album, “Chariot,” yielded three hit singles ? “I Don’t Want To Be,” “Follow Through” and the title-track, “Chariot.” “I Don’t Want To Be,” was chosen as the theme song for the hit television show, “One Tree Hill.”

His new, self-titled release, “Gavin DeGraw,” has more of a rock flavor without being a hard rock album. The first single, “In Love With A Girl,” finds DeGraw crooning about the security of being in a relationship. It is a quintessential rock jam that amplifies DeGraw’s ubiquitous themes of romance and is a perfect introduction to the new sound of his latest album.

Gold Fest is sponsored by LSU Homecoming 2008, LSU Athletics and Cox Communications. Tickets are $6 for LSU students and $11 for all others. Tickets are available at the LSUsports.net. Groups of 30 or more may receive a group discount by e-mailing homecoming@lsu.edu.

LSU Homecoming is now scheduled for Sunday, Nov. 9 through Saturday, Nov. 15. For more information on all 2008 LSU Homecoming activities and to register or RSVP go to www.lsu.edu/homecoming or become a fan on the Facebook page, LSU Homecoming. For questions, send your e-mails to homecoming@lsu.edu. The updated list of rescheduled 2008 Homecoming festivities includes:

Sunday, Nov. 9 ? 1 p.m.
Homecoming on the Road
Take your LSU Homecoming Spirit to those who can’t come to campus! The LSU group will visit Our Lady of the Lake Children’s Hospital and other places to have fun with those who can’t get to campus! Pre-registration is required and the departure point is still to be determined.

Monday, Nov. 10 – Friday, Nov. 14, 7-9 a.m.
Homecoming Morning Drive
Each morning LSU Homecoming 2008 will provide a morning boost to those in the commuter lots with quick games, prizes and a live remote from KLSU as the students get to campus.

Wednesday, Nov. 12 ? 10 a.m. – 6 p.m.
“Battle of the Cans” Food Drive Drop-Off
This food drive supports the important work of the Baton Rouge Area Food Bank.  Come out and show what it really means to be a Tiger! Issue a friendly challenge to other groups and make this the biggest and best year for the Battle of the Cans! Pre-registration is required to compete but donations will be accepted without registration. Donations can be dropped off on Tower Drive.

Thursday, Nov. 13 ? 7 p.m.
Rock-n-Roar!
Come to the beloved Alex Box Stadium one last time for a pep rally and concert like no other! Fans can show their devotion to the Fighting Tigers and stay for a concert experience. Musical acts and ticket sales dates are still to be determined.

Friday, Nov. 14 ? 7 p.m.
Lights Under the Oaks Program
LSU students and alumni are invited to meet under the oaks at the Greek Amphitheater for an evening to celebrate the LSU bond and to relive their fond memories at LSU. RSVP required.

Saturday, Nov. 15 ? 11:30 a.m.
LSU Homecoming Parade
The campus will be extra festive with decorations on the sorority houses, banners on the LSU Student Union, and other Homecoming sights. Don’t miss seeing this year’s Homecoming Court, bands, floats and special guests in the LSU Homecoming Parade as it winds past Sorority Row and Parker Coliseum and onto the Parade Ground.

Saturday, Nov. 15 ? 7 p.m.
LSU vs. Troy
Get to the game early to see the 2008 Homecoming Court presented in Tiger Stadium and the King and Queen crowned during the pregame festivities then stay to cheer for the Tigers as they roar through the home stretch!