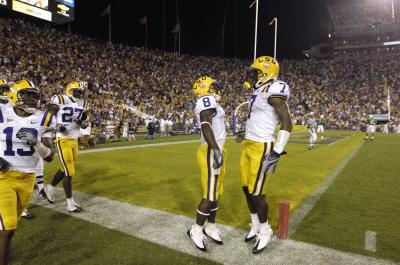 BATON ROUGE — Tulane, Northwestern State and LSU had student-athletes earn Monday’s Louisiana Sports Writers Association Player of the Week honors for their efforts in contests this past weekend.

Williams accounted for 203 yards in the Green Wave’s narrow 28-24 loss to #14 East Carolina this past Saturday. The junior from Baytown, Texas registered eight receptions for 138 yards and a touchdown through the air and returned three kickoffs for 65 yards. He caught three passes of 30-plus yards from quarterback Kevin Moore, including a 47-yard touchdown pass.

Arceneaux, a sophomore from Lockport, had a team-high 13 tackles, including a touchdown-saving one-on-one stop inside the one early in the fourth quarter on second down of a goal line stand by the Demons in a 31-19 win Sunday over Grambling State. The Tigers were trying to take their first lead of the game, but after Arceneaux’s tackle, failed. The John Curtis High School product added one pass breakup, 1 tackle for loss and three quarterback pressures in his first start at NSU after transferring from Ole Miss.

Holliday, the SEC Special Teams Player of the Week, returned four punts for 163 yards and one TD in LSU’s 41-3 win over North Texas in Tiger Stadium. Holliday, a junior from Zachary, returned a punt 92 yards for a second quarter score, tying for the second-longest punt return in school history. Also, his 163 punt return yards ranks second in school history and was the sixth-highest total in SEC history. It was also the most by a player in the SEC since 1983 when LSU’s Norman Jefferson had 169 punt return yards vs. Ole Miss.