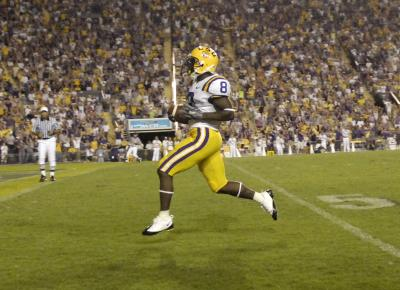 BATON ROUGE — LSU return specialist Trindon Holliday has been named the special teams player of the week in the Southeastern Conference for his performance in the Tigers’ 41-3 win over North Texas on Saturday, the league office announced.

In is first extensive action as a punt returner for the Tigers, Holliday didn’t disappoint, returning four punts for a total of 163 yards and a touchdown. Holliday returned his second punt 92 yards for a first half touchdown. The 92-yard punt return ties for the second-longest in school history.

In addition, Holliday’s 163 punt return yards ranks second in school history and sixth in SEC history. It’s also the most punt return yards in the SEC since 1983 when LSU’s Norman Jefferson set the league mark with 169 yards on seven returns against Ole Miss.

For the year, Holliday is averaging an SEC-best 40.3 yards per return.

Holliday also joined elite LSU company on Saturday as he became just the fifth player in school history to return both a punt and kickoff for a touchdown during a career. Holliday returned kickoffs for touchdowns against Arkansas in 2006 and Ole Miss last year. The other Tigers to have returned both a punt and kickoff during their career were Kevin Faulk, Eddie Kennison, Sam Grezaffi, and Pinky Rohm.

A track all-America in the sprints, Holliday has been named SEC Special Teams Player of the Week three times in his career.