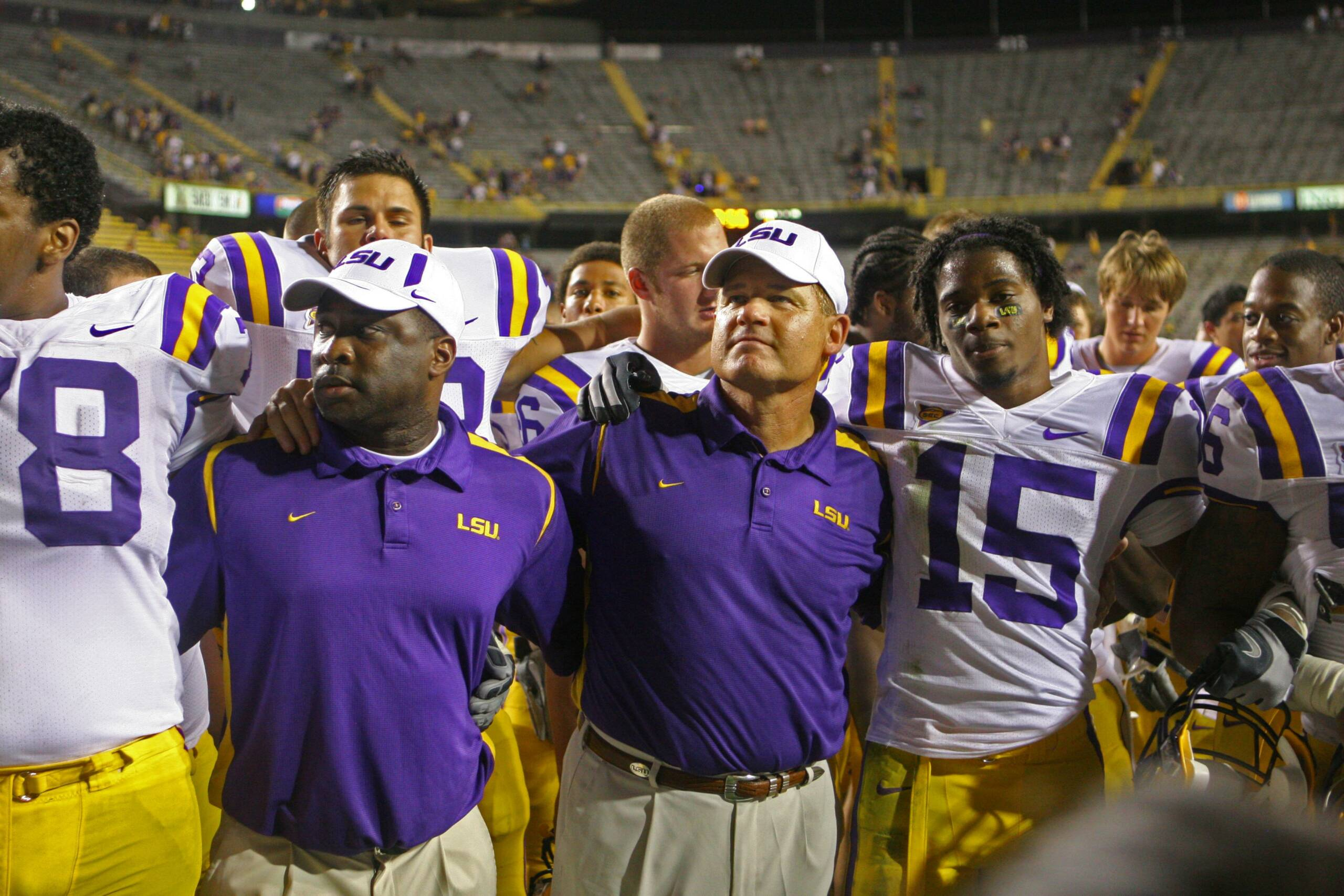 BATON ROUGE — LSU moved up one spot to No. 6 in both national polls ? Associated Press and USA Today Coaches – on Sunday, a day after the Tigers posted a 41-3 win over North Texas in Tiger Stadium.

LSU will get its first big test of the season on Saturday when the Tigers travel to Jordan-Hare Stadium to face ninth-ranked Auburn. Kickoff for the LSU-Auburn contest is slated for 6:45 p.m. The game will be televised nationally by ESPN.

LSU brings a 2-0 mark into Saturday’s game, while Auburn is 3-0 overall and 1-0 in league play following its 3-2 win over Mississippi State last week.

LSU’s No. 6 national ranking this week extends the Tigers streak of consecutive weeks in the top 10 to a school-record 25 straight periods. LSU has been ranked in the top 10 of every USA Today Coaches Poll and the AP Top 25 since Nov. 12, 2006.

The top five in both polls are the same with Southern Cal being ranked No. 1, followed by Oklahoma at No. 2, Georgia at No. 3, Florida at No. 4 and Missouri No. 5.

The SEC boasts a total of five teams in the AP Top 10, a first in league history. In addition to Georgia, Florida and LSU, Alabama is No. 9 this week, followed by Auburn at No. 10.

On Darry Beckwith’s injury…
“There is an injury of significance to Darry Beckwith, and it’s safe to say he won’t be available this week. I think he’ll be back pretty soon, but I don’t know when.”

On the North Texas game…
“Upon review, it was really just what we needed. We certainly were not perfect. If you look at it, the quarterbacks made some mistakes that they would like to have back and that they’ll learn from, but the overall play was pretty good. I think that they managed the game well, and I think they’re improving, and I think that they will improve. I like the direction there, and I mean all three (quarterbacks). I don’t think we’ll change the order in anyway. You just never can tell how a game week unfolds.

“We put them in a bunch of situations, two-minute drives and drives with length. We had some third down passes. I like the position that we’re in, and I’m glad that we had the game we had. I feel the same way about our running backs. I wanted to see a number of guys carry the ball. I wanted to see 26 (Murphy) and 34 (Ridley) and 32 (Scott) and 5 (Williams) make plays, and they all did. They came out pretty fresh, and I look forward to calling those numbers again.

“I evaluated the blocking at the wide receiver position, and it was very good, and it’s the reason for some of the big plays. You don’t get to see it until the film. We came off the football and scrapped for yards. That’s why there were some big plays.

“I liked the defense. We will be, again, back to no huddle, and the communication on the field is going to have to get better. I think we were more of a slower tempo, and I think that probably hurt our communication. I don’t think it challenged us like a no huddle does. I think the no huddle will allow our team to focus and be more equipped to handle an up tempo game. The defensive line played well. The linebackers played well. We had some busts in the secondary at times but not anything we can’t fix. I saw a lot of young players play, and that was good. There will be some adjustments to playing time for some guys that played well and some guys that didn’t. That’s not very unusual. I don’t know if it’s necessarily something you’ll see.

“Again, this was something we desperately needed, to get the second game in. If we hadn’t gotten this second game in, we would be in real peril going into this next contest. The punting wasn’t bad. It certainly was efficient. I’m not certain we won’t take both punters next week. Our kickoffs were, at times, excellent but at other times, sloppy, and we have to maintain greater execution in a game like the one we’re about to play.

“I’m really pleased with Trindon Holliday’s receptions in the punting and as a punt receiver and returner. I really like the way he went back, and I just feel he’s really improved. He’s worked hard at his receiving skills as a receiver, and I’m really encouraged by the style of punts he had to field. He had to run back and take punts in areas we didn’t want him to field in, but he showed a very comfortable feel for receiving punts, and we’ll give him some chances to do that again. It’s not that Chad (Jones) and (Patrick) Peterson won’t be close enough by that they could take some snaps for us, but it would be nice for No. 8 to do that again.

“He tied the second-longest punt return for a touchdown and the second-highest number of punt return yardage for a game, so both of those things you can put his name next to.”

On the crowd…
“I’m pleased very much with the crowd. That first-half crowd could have been much less than it was based on what was happening very close near by, but there was a very strong crowd of people there.”

On LB Jacob Cutrera…
“He looked pretty good. I think our two-deep will involve him and Kelvin Sheppard in Darry’s absence.”

On DB Danny McCray…
“There’s a really strong chance that Danny will be back. I won’t necessarily know today, but he is going to practice on Monday.

On what he misses most with Beckwith out…
“Certainly, his experience is something that you just can’t measure. His leadership has always been good. Certainly, he’s a guy that this team enjoys being the center of the defense, but in the same vein, the guys need to step in there and be responsible for playing the same way. We are fortunate to have talent there.”

On the defensive communication…
“I think we communicated better on defense against Appalachian State only because they were a no huddle offense, and we knew that there was a little more pressure to get everything communicated. With a no huddle, the awareness you need to communicate efficiently and communicating quicker would be good for us.”

On playing at Auburn…
“I want us to treat this like we would treat any road game to be honest with you and that we would want and look forward to going there and playing our style of football. I certainly want to have an aggressive approach and look to score some points. I think the reason we didn’t score a lot of points last time was that I don’t think we were as good on offense at running the football as we are currently. I think maybe we can throw the ball a little bit more efficiently than we did then, and that was a pretty good quarterback (JaMarcus Russell) throwing the ball then.”

On the two quarterbacks doing more than managing the game…
“Certainly, we practice those things all the time. Every drive is a game on the line even though it’s not. I think that some of those things can only be answered on game day. Does he enjoy fighting and competing? I think both of our guys do. Certainly, with the game on the line and situations that are specific to tight games, we need to see more.”

On the Auburn offense…
“I think that we’ll be very honest to recognize that that offense is very dangerous. They have running backs and a quarterback that can throw it and receivers. I think we’ll look forward to a very competitive game and be ready to play.”

On not hyping up this game too much…
“It just counts one no matter what, but it certainly is a very important game, and for us, we want to play well there. I think there’s a great challenge to playing well at Jordan-Hare Stadium. I really do, but it’s specific to this Saturday. Too much can be said about the focus of that game. It just counts one.”