Centenary No Problem for Ranked Soccer Side 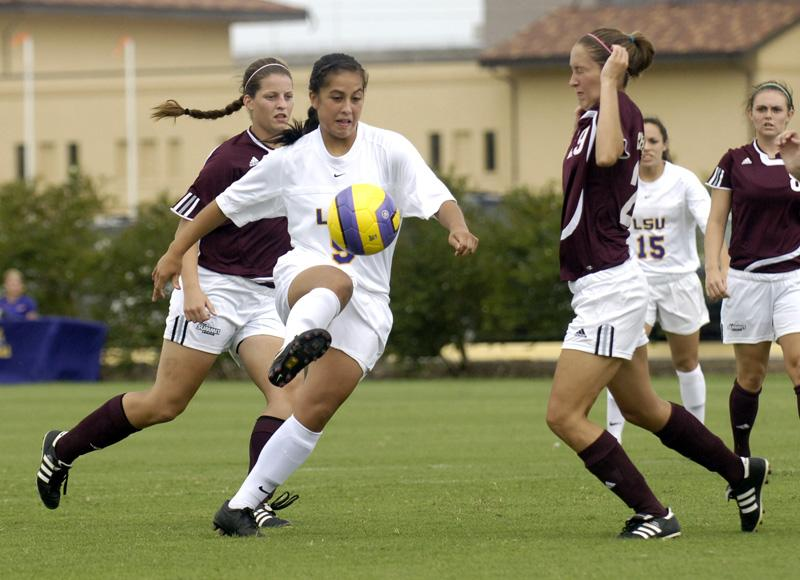 BATON ROUGE — The 12th-ranked LSU soccer team returned to the pitch for the first time in 13 days and showed little effect from the layoff by cruising to a 7-0 shutout of Centenary College on a rainy Sunday afternoon at the LSU Soccer Complex.

The Tigers have seen quite a shakeup to their schedule in the early part of the season as Sunday’s match was added on Friday. Games against Kent State and Dartmouth scheduled for last weekend were canceled with Baton Rouge beginning to recover from Hurricane Gustav, and Friday’s game against Louisiana-Lafayette was postponed with Hurricane Ike nearing the Gulf Coast.

“This was an important game for our team because we’ve been two weeks without any real game action,” said LSU head coach Brian Lee. “It’s good to get our game legs back under us. It took us 15 minutes or so to get back into the flow, but I thought we were very good once we found a little bit of a rhythm. This was another positive step forward for our team.”

It took the opening 15 minutes of the first half for LSU to find a rhythm, but once the Tigers went up 1-0 at the 18:29 mark, they dominated the offensive end of the field with a total of 13 shots on goal in 21 attempts and two corner kicks. Centenary did not record an offensive stat in the game.

Junior All-American Michelle Makasini led the way with her second career hat trick and her first since a 3-0 road win over South Alabama back on Sept. 15, 2006.

Makasini put the Tigers on top in the 19th minute with her third goal of the season when she rifled a header into the back of the net from the left side of the six-yard box following an end-line cross off the foot of senior captain Roslyn Jones sprinting down the right side of the field.

After junior Rachel Yepez extended the LSU advantage to 2-0 at the 20:22 mark with her third goal of the season, it took Makasini just 21 seconds to give the Tigers their third goal of the game and her fourth of the season when she ripped a shot past the Centenary keeper from the right side of the six-yard box following a centering pass from junior Malorie Rutledge.

The Tigers actually set a school record by scoring their first three goals of the game 2 minutes, 14 seconds apart, breaking the previous record of 3:33 for the fastest three goals scored in a match when they did so in a 5-0 shutout of McNeese State exactly on year ago on Sept. 14, 2007.

LSU took a commanding 4-0 lead into the halftime break when freshman Hannah Jobe scored the first goal of her career in the 40th minute of play.

The Tigers wasted no time in extending their lead out of the locker room as Jones scored her third goal of the year at the 50:02 mark when she deflected the ball past the keeper after a Centenary defender attempted to clear it out of bounds for a corner kick. Makasini completed her hat trick in the 63rd minute, while junior Amanda Carreno provided the final margin in the 71st minute.

Freshman Mo Isom helped the Tigers stifle the Centenary attack as she posted her third shutout in five career starts in goal, improving to 5-0 and lowering her goals against average to 0.40.

The Tigers were scheduled to play host to the Houston Cougars on Tuesday at the LSU Soccer Complex, but that game was canceled early Sunday morning with the city of Houston still reeling from the aftermath of Hurricane Ike. LSU will instead head to Norman, Okla., on Friday night to take on the Oklahoma Sooners in a match scheduled for a 7 p.m. kickoff.