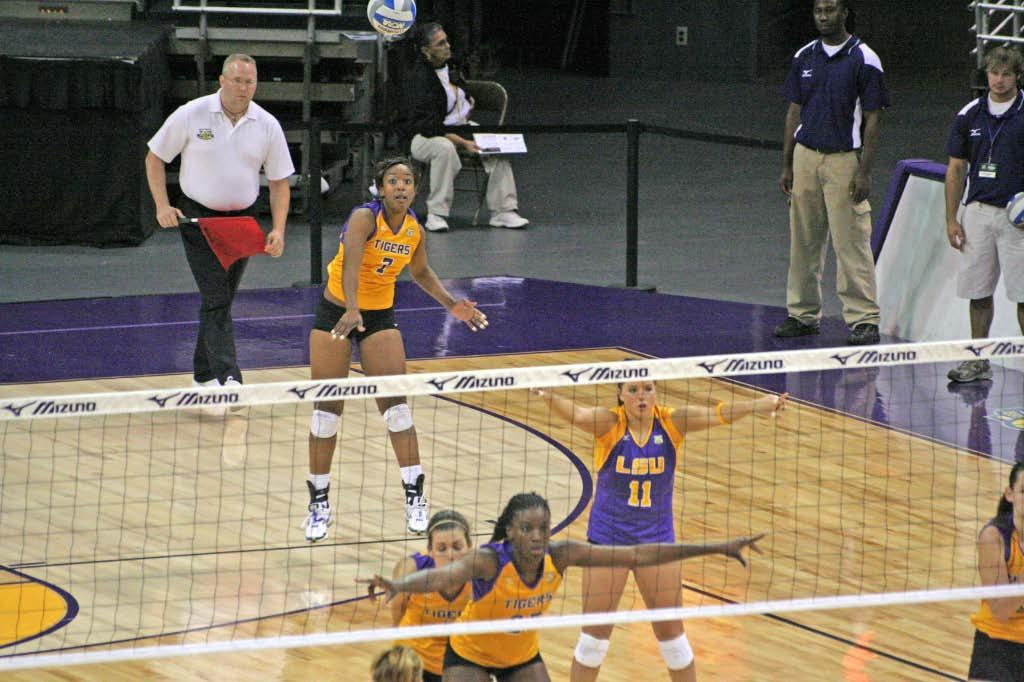 LINCOLN, Neb. — The LSU volleyball team used a dominant effort at the net to defeat St. John’s in four sets (18-25, 25-19, 25-16, 26-24) Saturday in Nebraska’s NU Coliseum to rebound from a tough loss Friday and close out play in the Ameritas Players Challenge.

“I thought this was a very mature response to our loss last night,” LSU head coach Fran Flory said. “We knew this would be a very important match for us, and we knew we needed to control things at the net if we were going to win. Blocking was definitely an emphasis for us going into this weekend, even though it really didn’t show against Nebraska. Today it was obvious and I really saw the progress we’ve made in that aspect of our game.”

Elena Martinez‘s 15 digs spurred the Tigers defensive effort as well and also cemented a place for the senior in the 1,000-dig club for her career. With 1,004 total, she also moved into ninth place all-time in career digs in LSU history.

“Elena is a special player,” Flory said. “She makes coaching easy and her ability to keep the ball off the ground goes beyond just being a great athlete. She has a natural feel for the game, and I’m not surprised at all she’s reached this milestone. I’m certainly proud of her for that.”

Setter Sam Dabbs also neared another triple-double, adding nine kills and eight digs to her 42 assists. She had a triple-double in the Tigers’ opining win over Texas A&M and was just two kills shy of another against McNeese State.

Washington added impressive hitting stats to her blocking numbers, turning in a match-leading 14 on a .314 clip. DeGirolamo’s 11 kills came on a .320 clip as well.

“I thought Kyna had an amazing match and showed her maturity and her ability to be a balanced, six-rotation player,” Flory added. “And as a team, hitting .262 against a very good St. John’s team was great for us. They’re a team that’s going to beat a lot of people they play and have a chance to win their conference.”

The Red Storm opened up an early lead on the Tigers in set one, but LSU settled down and tied things up at 9-all behind a 6-1 run. But St. John’s used a late rally to take the opening set, 25-18. DeGirolamo led all players with five kills in the first set with a .625 percentage. Dabbs also had three kills on her first four attempts.

After exchanging several leads early in set two, the Tigers took a three-point lead at 10-7. However, the Red Storm came back to tie the set at 14-all. Then a 3-0 Tiger run prompted St. John’s to take a timeout. LSU was able to keep that lead and take the second set, 25-19.

The Tigers dominated the net in set two with an astounding nine blocks, as middles Cooper and DeGirolamo contributed four each. LSU led the Red Storm in team blocks after the second set, 10-0.

LSU kept up its blocking early in the third frame, taking a 9-5 advantage behind two more solo blocks and forcing a St. John’s timeout. In all, the Bayou Bengals used four total blocks to control the third set, 25-16, and take a 2-1 lead in the match. LSU also hit an efficient .333 behind four kills from Washington and three each from Dabbs and Cooper.

The fourth set was a much tighter contest, as it went to 26 points to decide the winner. That distinction went to the Tigers, 26-24, which sealed the victory over last year’s Sweet Sixteen competitor St. John’s.

This was the final non-conference tournament of the year for the Tigers, who open up Southeastern Conference play next weekend with matches at South Carolina and Florida.