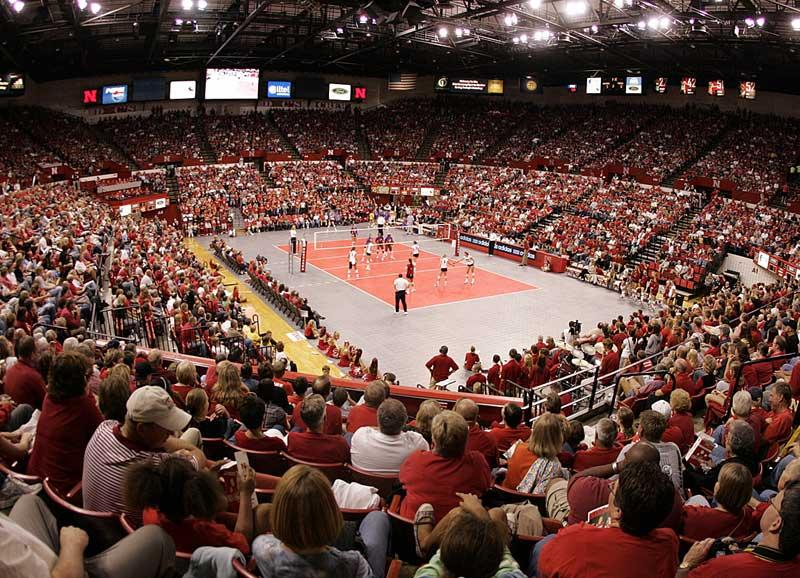 LINCOLN, Neb. — A record NCAA volleyball regular-season crowd of 13,412 was on hand Friday to watch the LSU volleyball team’s match at No. 2 Nebraska, where the hometown Huskers used their home crowd advantage for a 3-0 win (25-19, 25-15, 25-20) in the Ameritas Players Challenge in the Devaney Center.

With the loss, the Tigers drop to 4-2 on the year. The win gives Nebraska a perfect 7-0 mark for the season, as the Huskers have fallen in just one set in those seven matches. The crowd of 13,412 was not just a Nebraska volleyball record, but the most people who have ever watched a regular-season NCAA volleyball match in history.

“This was a great environment for us to be a part of,” LSU head coach Fran Flory said. “It was a very volleyball-friendly crowd in that they cheered for both sides after great plays and showed a true display of positive sportsmanship. I’m certainly encouraged with the level we were able to play and match Nebraska, but discouraged by the fact that we weren’t able to maintain that. I definitely have to credit Nebraska, because when we put pressure on them they answered and raised their level of execution.”

The Tigers were able to stay close with Nebraska early in all three sets, even holding several leads throughout. But the Huskers always managed to rebound and seize momentum when they needed it.

“We did a great job of keeping up the pressure on Nebraska in every game up to about 15,” Flory explained. “After 15 we were unable to maintain the level of consistency we needed to have to beat a team of that caliber. This match certainly gave us a lot to work on and a vision of what we’re capable of doing throughout the remainder of the season. I’m excited about what we’re going to take with us from this weekend.”

Nebraska will face New Mexico on Saturday for the championship match. New Mexico defeated St. John’s, 3-0, in Friday’s early match. LSU and St. John’s will play at 12:30 p.m. in the consolation match.

Brittnee Cooper led the Tigers with nine kills on 14 attempts for a .571 hitting clip. Sam Dabbs had 21 assists while Elena Martinez contributed 10 digs.

Jordan Larson spearheaded the Nebraska effort with 14 kills and a .375 hitting clip. Setter Sydney Anderson dished out 33 assists and Tara Mueller and Kayla Banwarth chipped in with 11 digs each.

The Tigers opened up a 4-0 lead on the Huskers in set one before Nebraska’s first point and extended it to 6-1 to force the Huskers to call an early timeout. Nebraska responded with five straight points to tie the set. After the Huskers went on a run to take an 11-8 lead, LSU scored four straight for another lead at 12-11.

The Tigers had a two-point lead at 16-14, but three straight scores from the Huskers gave them a 17-16 lead and prompted LSU to use its first timeout. It used a second as well when Nebraska increased that to a 20-16 margin. The Tigers managed three more points in the set, but not enough for the win.

Angela Bensend led all Tigers with four kills in the opening set on only four attempts, but as a team LSU was out-killed, 15-11. Nebraska hit .452 in the first set while the Tigers hit just .125.

The Huskers went on roll in the second set early, and LSU called a timeout down 11-6. But Nebraska kept the momentum through the remainder of the set, winning 25-15. Cooper led the Tigers in this set with five kills on eight attempts. She had six total with a .556 hitting clip following the second set.

LSU kept things much closer early in the third set. They even led at about the midway point, 13-12. But Nebraska took off at the end, closing out the set and the match with a 25-20 decision.

The Tigers will play their final match in the Ameritas Players Challenge on Saturday at 12: 30 p.m. against St. John’s, which fell 3-0 to New Mexico in the first match Friday. The Red Storm are 5-4 heading into the contest.