Men's Golf Off to Fast Start in Minnesota 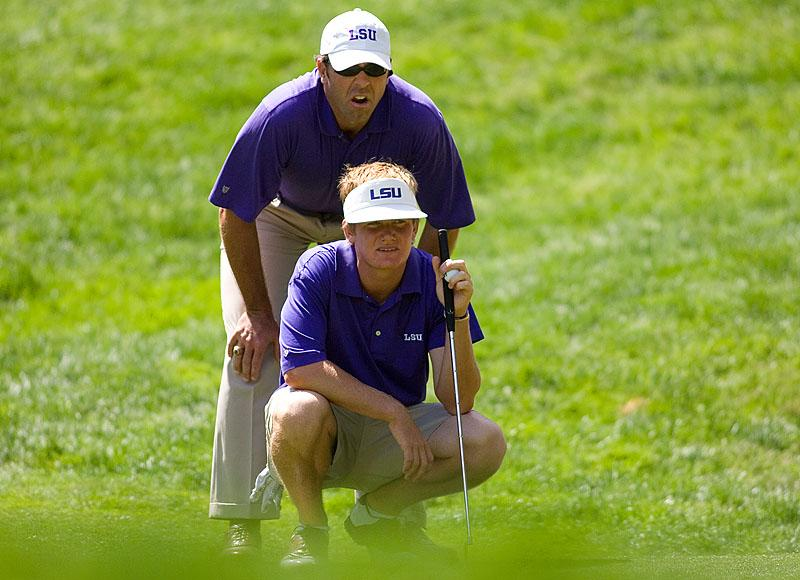 WAYZATA, Minn. — LSU’s much anticipated men’s golf season kicked off Friday with the first round of the 2008 Gopher Invitational, and the Tigers shot out of the blocks with an impressive 4-under par round of 284 to finish the day in second place in the team standings.

LSU trails 24th-ranked Texas by just two strokes as the Longhorns fired a 6-under 282 in opening-round action at picturesque Spring Hill Golf Club.

The Tigers were led by the outstanding play of sophomore John Peterson, who finished the day in sole possession of second place on the individual leaderboard after lighting up the course with six birdies and two bogeys en route to a 4-under 68.

After falling to 1-under on his round with a bogey on the par-four 10th hole, the Fort Worth native carded back-to-back birdies on the par-four 12th and par-five 13th before making birdie on the par-five 16th to finish strong with a 68. This marks the second straight season that Peterson has kicked off the year with a 4-under par round as he did so in his collegiate debut in 2007.

Peterson is joined in the Top 10 by two other Tigers as freshman Sang Yi finished the day in a tie for third place and sophomore Clayton Rotz wrapped up his round in a tie for ninth place.

Yi, a native of Carrollton, Texas, was impressive in his collegiate debut as he made birdie on four holes, including the par-four 18th hole, to card a 2-under 70 at the par-72 layout. After opening his round with a double bogey on No. 1 and a bogey on No. 2, Rotz battled back with an eagle on the par-five third hole and holed out on the 18th green with an even-par round of 72.

Sophomore Andrew Loupe contributed a 2-over 74 to LSU’s team total, finishing strong with a 1-under par on his back nine after making the turn at 3-over for the day. Freshman Josh Jones made his collegiate debut with a 9-over 81 during Friday’s action.

“Today was a great day to play golf, and this was a good start for our team,” said LSU head coach Chuck Winstead. “John obviously played a good, solid round for us today and got off to a great start. I also thought Sang and Clayton played well. We put ourselves in a good position and we’re looking forward to getting back out there and competing tomorrow.

“Josh had a little bit of a rough day today, but he’s one heck of a player. I don’t have any doubt in his ability out on the golf course. He’s going to be fine and will come back strong tomorrow.”

The Pepperdine Waves are seven shots behind the Tigers in third place after opening with a team score of 3-over 291, while Washington currently sits in fourth place at 4-over 292 and Minnesota and Marquette are in a tie for fifth place at 10-over 298. Texas standout Charlie Holland leads the chase for medalist honors by one shot over Peterson after firing a 5-under 67.

LSU will tee it up alongside Texas and Pepperdine in Saturday’s second round as they start from the front nine beginning at 9 a.m. CT. Live scoring of the second and third rounds is provided by Golfstat and can be found online by logging on to the its official website at www.golfstat.com.