It's GameDay: The Return of Saturday Night in Tiger Stadium 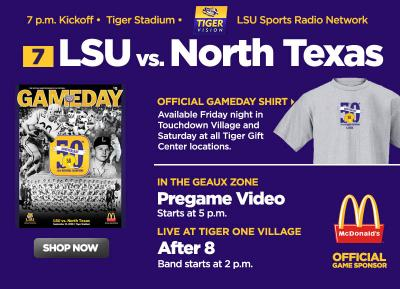 BATON  ROUGE — Ike couldn’t do what Gustav did a week ago and that’s postpone an LSU football game as the seventh-ranked Tigers hope to provide a diversion to communities across South Louisiana by playing football on Saturday night in Tiger Stadium.

LSU will host the Mean Green of North Texas at 7 p.m. on Saturday in a contest that will serve as the final tuneup before the Tigers open conference play next week at Auburn. The game will be televised on Tigervision, LSU’s pay-per-view network. The contest will be shown free of charge in the Baton Rouge area on Cox cable 4.

Much like in 2005 when the Tiger football team became the inspiration for a state ravaged by a pair of Hurricanes in Katrina and Rita, LSU player s and coaches alike see Saturday’s game as a way to provide some relief for a region that has suffered so much destruction over the past 12 days.

5 p.m.
Mike the Tiger comes down the hill

“I know I’m not good with a saw or a hammer so my way of giving back to the people is by playing football for them,” LSU defensive end Tyson Jackson said. “As a team, that’s what we want to do. We are excited to be back playing in Tiger Stadium on Saturday night.”

LSU brings a 1-0 mark into the game against North Texas after opening the season with a 41-13 victory over Appalachian State. North Texas is 0-2 overall following losses to Kansas State (45-6) and Tulsa (56-26).

Despite its 0-2 start and a lopsided margin of victory in LSU’s three wins over North Texas, Les Miles said he expects the Mean Green to challenge the Tigers.

“This is a very capable North Texas football team, even though they’ve lost their first two games,” Miles said. “That program is accustomed to winning and playing for conference championships. They won four straight Sun Belt titles from 2001 to 2004.

“I have a great deal of respect for their head coach Todd Dodge. He’s developing a program that the North Texas alumni and fans can be very proud of. Any time that you have a football team that can recruit in North Texas and have a team that has a tradition of winning and understands what winning is all about the temporary setbacks are certain issues they can overcome. I promise you that we will be challenged by this team.”

Against the Mean Green, the Tigers will look to pick up offensively where they left off in the season-opener against Appalachian State. In that game, the Tigers, behind the running of Charles Scott, racked up 41 points and 459 yards of offense. Scott rushed for a career-best 160 yards in the opener and has an opportunity to add to that total against North Texas as the Mean Green is allowing over 500 yards and 50 points per game.

The Tigers are expected to continue to use a two-quarterback system with Andrew Hatch and Jarrett Lee sharing snaps. The duo combined to complete 13 of 24 passes for 193 yards and three touchdowns in the opener.

Defensively, the Tigers are allowing 13 points and 239 yards per game ? 52 rushing and 187 passing. The Tiger defense will be challenged by a pass-happy North Texas offense as the Mean Green has thrown 74 passes compared to just 60 rushing attempts in its first two games.

North Texas is coming off a 450-yard offensive output against Tulsa last week as quarterback Giovanni Vizza connected on 30 of 45 passes for 247 yards.

The Mean Green’s spread offense will be challenged by a Tiger defense that features one of the best fronts in college football. In the season-opener, the Tigers had six tackles for losses and three sacks against Appalachian State.

“Everybody on the team is excited about playing in Tiger Stadium on Saturday night,” Miles said. “Night games in Tiger Stadium, that’s LSU football and that’s one of the things that makes our program unique. It’s a sign that things are beginning to get back to normal around here.

“We are looking forward to playing at home in front of the greatest fans in college football.”