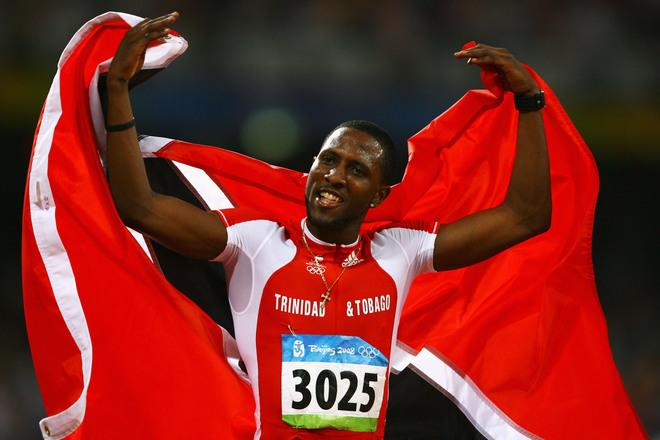 BATON ROUGE — Olympic silver medalist Richard Thompson received a hero’s welcome upon his return to the country of Trinidad and Tobago on Monday as government officials are planning an extravagant four-day celebration in honor of the former LSU star.

Thompson’s time of 9.89 seconds in the 100-meter final is a new personal best and second only to the world-record run of 9.69 by gold medalist Usain Bolt of Jamaica.

He became LSU’s first ever medalist in the 100-meter dash and put his name alongside national heroes Hasely Crawford and Ato Boldon as the only sprinters from Trinidad and Tobago to medal in the event in the 112-year history of the modern Olympic Games. Crawford won gold in 1976 in Montreal, while Boldon won bronze in Atlanta in 1996 and silver in Sydney in 2000.

Thompson and relay teammates Aaron Armstrong, Keston Bledman, Marc Burns and Emmanuel Callender were met by Prime Minister Patrick Manning and other members of his PNM Government upon their arrival at Piarco International Airport near the capital city of Port of Spain on Monday morning with the celebration set to begin the same day.

The organization of the extravaganza was no easy task as both Thompson and Burns competed in Europe following the Olympics as part of the IAAF Golden League series, while their teammates reportedly returned to their respective bases in the United States.

Monday’s celebration will feature a stirring calypso tribute by Calypsonian De Fosto, as well as cultural processions and performances by Philomena Alexis Baptiste, the Malick Folk Performers and Tassa Group, Electric Dance Group and other forms of indigenous entertainment.

The day will conclude with a public celebration at the bottom of St. Vincent Street and the Brian Lara Promenade where Thompson will address the crowd on behalf of the team.

On Tuesday, the team members will be presented with the Chaconia Gold Medal from President George Maxwell Richards at the President’s House in St. Ann’s. An “open mic” session for the team at the Naparima Bowl in San Fernando on Wednesday followed by a visit to the sister island of Tobago on Thursday when the Tobago House of Assembly will set the schedule of events.