Mike the Tiger Named to Capital One All-America Mascot Team 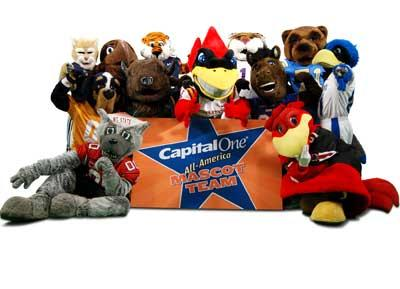 MCLEAN, Va. — Mike the Tiger from LSU has been named to the seventh-annual Capital One All-America Mascot Team, made up of 12 over-sized and often under-appreciated characters ? including three birds, three cats (that could be trouble), one bison, one horse, one wolf, one turtle, one bear and a dog.

Each one of these mascots will be putting their best claw, paw, hoof and talon forward while attempting to claim the proverbial mountain of mascot fame and fortune ? the title of “Capital One National Mascot of the Year.”

Starting Sept. 8, fans can vote online at www.capitalonebowl.com, for their favorite All-American Mascot, who will be announced during the Capital One Bowl on Jan. 1, 2009.

Mike the Tiger will be competing in a weekly mano-a-mano battle royale among this year’s All-Americans:

“We created this contest to celebrate the unsung heroes of college football,” said Steve Schooff at Capital One. “Last year, a kangaroo from the University of Akron hopped and kicked its way to the top mascot title in the land. This year, we’re anxious to see which mascot will rise to the challenge and claim the throne of Capital One National Mascot of the Year.”

The fan vote is the sole determinant of the winner; the people choose. Voting consists of 11 weekly head-to-furry-head match ups between the All-Americans, with fans being able to vote daily for their favorite mascots. The mascots with the best win/loss records face off in online playoffs starting in November. The winner will be pronounced Capital One National Mascot of the Year on January 1, 2009 during the Capital One Bowl.

“Mascots work as hard as anyone on the field, but are lost in the shadows of touchdown celebrations and pre-season and post-season accolades of the flashy all-star quarterbacks and running backs,” said Dr. Roy Yarbrough, mascot guru and historian. “This is a great tribute to them, and fans should show their support. Bragging rights and national recognition are on the line.”

This year’s eclectic crew of birds, mammals and reptiles were chosen from Division IA and IAA athletic programs with college football teams. They made the squad after being ranked on mascot musts such as interaction with fans, originality and pedigree. The panel of judges included mascot guru and historian, Dr. Roy Yarbrough, and representatives from Capital One.

Over the past six years, Capital One has helped thrust the spotlight on these unsung heroes of the gridiron. Mike the Tiger will be starring in a national advertising campaign, which this year features the mascots participating in the Capital One Mascot Challenge ? Top Tailgater, a series of unusual (and fictitious) grilling, cooking and tailgating competitions. In addition to the hoopla, Mike the Tiger receives $5,000 for its school’s mascot program. The Capital One National Mascot of the Year receives an additional $5,000 scholarship to help fund its school’s mascot program.

WRITE IN YOUR FAVORITE MASCOT
Didn’t see your school’s mascot in this year’s Mascot Challenge? Once again, Capital One has added an additional fan component to this year’s competition. Fans can log on to www.capitalonebowl.com and nominate your school’s mascot for a chance to win $1000 toward their Mascot Program and an opportunity to compete in the 2009 Capital One Mascot Challenge! Each voter is allowed one vote per day, so show your school spirit and vote ? vote ? vote to see your favorite BMOC (Big Mascot on Campus) in next year’s competition!

About Capital One
Capital One Financial Corporation (www.capitalone.com) is a financial holding company whose subsidiaries collectively had $92.4 billion in deposits and $147.2 billion in managed loans outstanding as of June 30, 2008. Headquartered in McLean, VA, Capital One has 740 locations in New York, New Jersey, Connecticut, Texas, and Louisiana. It is a diversified bank whose principal subsidiaries, Capital One, N.A. and Capital One Bank (USA), N. A., offer a broad spectrum of financial products and services to consumers, small businesses and commercial clients. Capital One’s affiliation with college football began with the sponsorship of the 2001 Capital One Florida Citrus Bowl (now the Capital One Bowl) and ESPN’s Bowl Week. In addition, Capital One sponsors the ABC College Football Halftime Report and numerous other college football programs.