Isom Named National Player of the Week by Soccer America 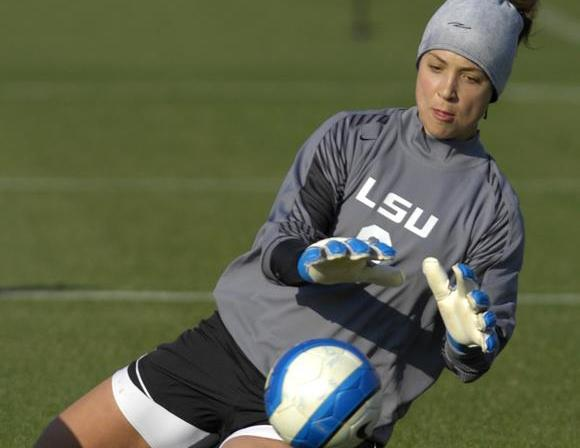 BATON ROUGE — LSU’s freshman goalkeeper Mo Isom has certainly made a splash just four games into her collegiate career, and she was recognized for her performance Tuesday as she was named the Soccer America Women’s National Player of the Week.

Thanks to the play of Isom and the rest of the Tigers, LSU is off to a perfect 4-0 start this fall and has earned its highest ranking in program history at No. 17 in this week’s Soccer America Top 25 released Monday. The Tigers have also climbed to No. 19 nationally and No. 4 in the Central Region in the latest Soccer Buzz Top 30 released on Tuesday morning.

The native of Marietta, Ga., played all 270 minutes in goal for the Tigers this week, posting a 3-0 mark with a sparkling 0.66 goals against average while making 13 saves.

After leading LSU to a 4-1 victory over then 25th-ranked BYU on Aug. 25, Isom earned Most Valuable Player honors at the inaugural Lakeside Invitational hosted by Northwestern University in Chicago this weekend following a 2-0 shutout of Northwestern on Saturday and a 2-1 win over Loyola-Chicago on Monday night.

But Isom received national attention on Tuesday of last week when her goal against BYU was aired in homes across the globe as part of the “Top 10 Plays” segment of ESPN’s SportsCenter in the midnight show, cracking the top-five plays of the day at No. 3 on the countdown.

She lined up to take a routine free kick in the second half and sent a 90-yard rocket over the BYU defense. The ball took one bounce near the top of the penalty area over the keeper’s head and into the back of the net for her first career goal and the first ever goal scored by an LSU goalkeeper.

More importantly, it helped LSU extend its school record home unbeaten streak to 13 matches as the club has not tasted defeat at the LSU Soccer Complex since Oct. 13, 2006.