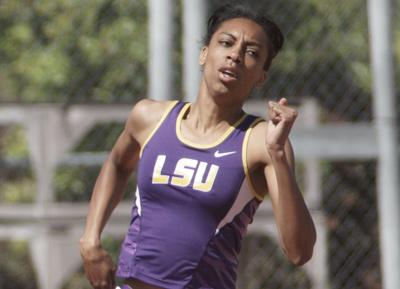 BATON ROUGE — Two Lady Tigers have been honored by the Southeastern Conference for their performance at the 114th Penn Relays this past weekend as sophomores LaTavia Thomas and Katelyn Rodrigue received SEC Athlete of the Week honors Tuesday.

Thomas made a triumphant return to her hometown of Philadelphia as she was honored as the College Women’s Athlete of the Meet for relay events following Saturday’s competition. She joins a select group of Lady Tigers to receive such an honor at the Penn Relays, including Cheryl Taplin (1994), D’Andre Hill (1996) and Muna Lee (2003).

She was the star of this year’s relay carnival as she anchored the Lady Tigers to two of their four Championship of America titles, including the sprint medley relay on Friday night and the 4×800-meter relay on Saturday afternoon.

Thomas crossed the finish line nearly six seconds ahead of her nearest competitor in the sprint medley relay as she teamed with Samantha Henry, Kelly Baptiste and Deonna Lawrence for a time of 3 minutes, 46.65 seconds, which is the seventh-fastest time in school history.

LSU’s victory in the 4×800 proved to be more of a challenge as Thomas trailed Tennessee All-American Sarah Bowman when she took the baton on the anchor.

But Thomas ripped off a 2:03.8 split to beat Bowman (2:06.1) to the finish line with the fourth-fastest time in school history at 8:30.98 to give the Lady Tigers their second title in the event all-time and their first since 1987. She also ran the third leg on the Lady Tigers’ 4×400-meter relay team that finished runner-up to Penn State in the Championship of America final.

Like Thomas, Rodrigue has enjoyed her share of history-making moments in her two seasons at LSU, and Thursday she accomplished what no Lady Tiger has ever done by breaking her own school record in the pole vault to win the event title at the Penn Relays.

Rodrigue, who entered the meet with a seasonal best clearance of 13 feet, 2 ? inches, went up and over the bar at 13-7 ? to set a new overall personal best and raise the previous outdoor school record of 13-3 ? she set at the NCAA Mideast Regional Championships a year ago.

Despite going out with the bar resting at 13-9 ?, Rodrigue finished the competition ranked No. 2 in the SEC, No. 3 in the Mideast Region and No. 9 in the NCAA in the event.

This marks the second straight year that Rodrigue has competed at the Penn Relays after taking third place in the championship section of the pole vault a year ago, which was the best finish for a Lady Tiger in the event before Thursday. She cleared 13 feet for the first time in her LSU career at the meet a year ago when she posted a then school-record mark of 13-1 ? to finish third.