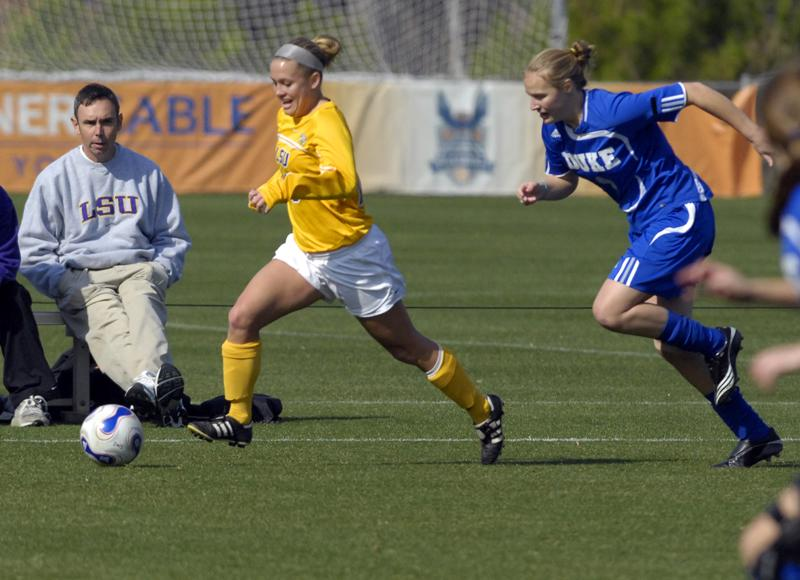 With family, friends, coaches, student-athletes and support staff on hand, the Tigers relived the success of the 2007 season in which they won their first ever SEC West title and competed in the NCAA Tournament for the first time in the 13-year history of the program.

“We certainly proud of our kids for everything that they accomplished this season, and we felt like it was important for everyone associated with LSU soccer to celebrate that for all of the hard work they’ve put in these last few years,” said LSU head coach Brian Lee. “This has been a great group of girls to coach, and we’re looking forward to even better things in 2008.”

In fact, the team advanced to the second round of the NCAA Tournament after picking up its first postseason victory with a 1-0 overtime defeat of Samford in the regional held in Tallahassee, Fla.

For their efforts, three Tigers received All-America recognition as sophomores Michelle Makasini, Malorie Rutledge and Rachel Yepez were named honorable mention All-Americans by Top Drawer Soccer. In addition, Makasini and Rutledge proved to be among the elite midfielders in the SEC after earning First-Team All-SEC honors for their performance.

They were joined on the all-conference squad by sophomore Chelsea Potts and freshman Taryne Boudreau, who received second-team and all-freshman honors, respectively.

Potts has been dominant force in the middle of the Tigers’ back line in her two years at LSU as she received Second-Team All-SEC honors for the second straight season, while Boudreau was named to the SEC All-Freshman Team in addition to receiving Freshman All-American honors from Soccer Buzz Magazine following the season.

The Tigers’ success was not limited to the field of play as 11 student-athletes were members of the SEC Academic Honor Roll, while senior Caroline Vanderpool, senior Valerie Vogler and junior Roslyn Jones were academic all-district selections by ESPN The Magazine.

The 2007 season also proved to be a record-setting campaign at the box office as the Tigers drew record crowds week in and week out at the LSU Soccer Complex.

The all-time attendance record was set three times in eight home matches as the Tigers opened up in front of a then record crowd of 1,828 against Southern Miss on Aug. 31.

The team went on to crack the 2,000 barrier twice as 2,160 fans filled the seats to see the Tigers take on McNeese State on Sept. 14, while and 2,402 fans packed the stands to witness the team earn its first ever win over an opponent ranked among the nation’s Top 10 with a dominating 3-0 shutout of sixth-ranked Tennessee on Oct. 5.

In all, the Tigers finished the 2007 season with a 12-5-7 overall record and a 5-2-4 mark in SEC play. Their 5-0-3 record at the LSU Soccer Complex marked the first time in program history that they finished unbeaten in their home schedule.

Now the focus turns to 2008 as LSU looks to build on its success as the team welcomes back nine full-time starters and five others who have earned starting experience in the SEC in their careers.

“This is without a doubt the most exciting time to be a part of LSU soccer,” Lee said. “I’m proud of our girls that they were able to break through and accomplish last year what no other team in the history of this program had done before. They’ve gotten a taste of success, and I know they’re ready for the 2008 season to begin so they can build on the great success from the fall.”

2007 LSU SOCCER AWARD WINNERS
Note: awards were voted on by the players and listed in the order received

Support Staffer of the Year
Will Stafford, Sports Information Director

Newcomer of the Year
Taryne Boudreau