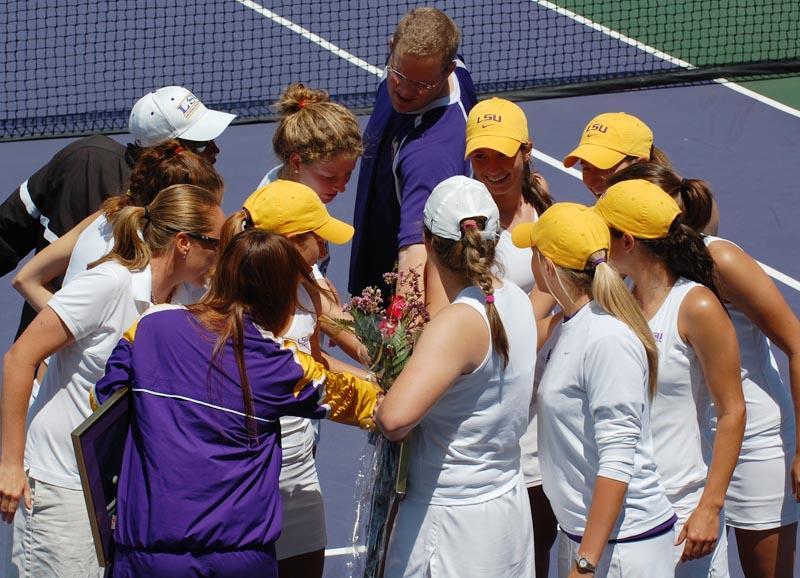 BATON ROUGE — For the second time this season the LSU women’s tennis team will be heading out West, this time to Berkeley, Calif., to face Washington State on Friday, May 9, in the first round of the 2008 NCAA Tournament, the NCAA announced on Tuesday.

LSU and Washington State will square off at 4 p.m. CDT at California’s Hellman Tennis Complex. Eighth-ranked Cal will play host to the regional and will face Army in the first round at 1 p.m. before the LSU-Washington State match.

Should LSU advance past Washington State, the Lady Tigers would face Cal or Army in the second round in Berkeley which is slated for Saturday, May 10, at 2 p.m.

“We’re excited to make the tournament again,” LSU head coach Tony Minnis said. “I’m very pleased with the opportunity to go out and play some different teams. I have a lot of respect for the Pac-10. They have been a very dominant conference in tennis, and Washington State will be a tough challenge because they have had some solid wins this season.”

LSU enters the NCAA tournament with a 14-9 overall record and a 6-5 Southeastern Conference record. The Lady Tigers are led by junior Megan Falcon, who is 26-6 this season.

Falcon remained at No. 15 in the latest Intercollegiate Tennis Association singles rankings released on Monday. Falcon and Mykala Hedberg moved up two spots to No. 22 in the doubles rankings.

Washington State enters the tournament with a 16-9 overall record and a 3-7 Pac-10 record. This will be the first ever match between LSU and Washington State.

No. 8 Cal boasts a 16-5 overall record and a 10-3 conference record, which tied for first in the Pac-10. If LSU and Cal meet in the second round, it will mark the first time the two schools will face off.

Army, the champions of the Patriot League, enters with a 25-7 overall record and a perfect 6-0 conference record. Army is the only school in the Cal regional LSU has faced in program history. LSU leads the series 1-0 as the Lady Tigers defeated Army, 6-0, in 1992.

The SEC is well-represented once again in the brackets as nine teams were selected to the tournament. Besides LSU, conference tournament champion Georgia, regular season champion Florida, Vanderbilt, Kentucky, Tennessee, South Carolina, Arkansas and Auburn will compete in the tournament.

LSU is making its 14th overall appearance in the NCAA Tournament and 13th in the last 14 years. The Lady Tigers made it to the tournament 11 straight season from 1995-2005. Last season, LSU traveled to Chapel Hill, N.C., for the North Carolina Regional where the Lady Tigers fell, 4-1, in the first round to No. 22 Duke.