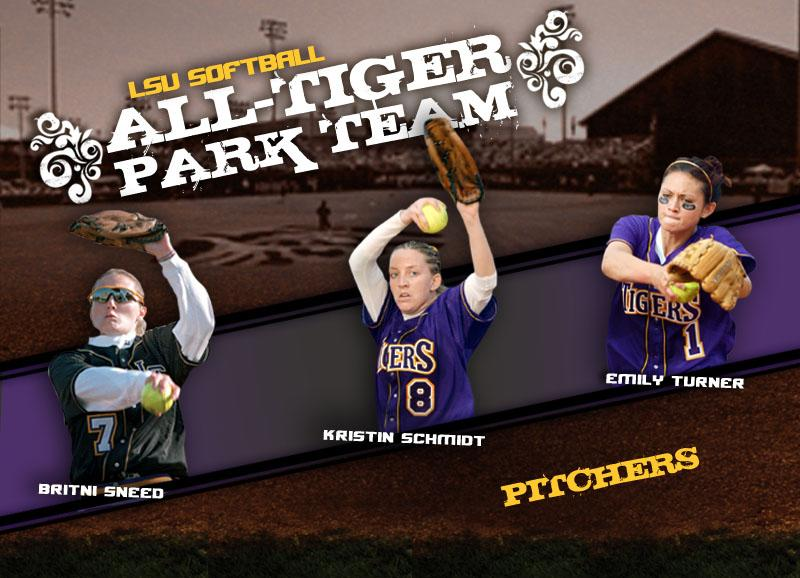 BATON ROUGE — In celebration of the final season of Tiger Park and after LSU concluded the final regular season home games in the old park with a series sweep of Arkansas last weekend, Kristin Schmidt, Britni Sneed and Emily Turner were named the All-Tiger Park team pitchers.

The LSU softball team has now announced its 12 members of the All-Tiger Park team. The honorees include LaDonia Hughes, Leslie Klein and Trena Peel from the outfield; Tara Asbill, Ashlee Ducote and Jodi Otten from the infield, Killian Roessner at catcher, Stephanie Hastings at utility and Lauren Castle at designated player, in addition to Sneed, Schmidt and Turner in the circle. All 12 members of the All-Tiger Park team garnered either NFCA or Easton All-America honors and went on to earn their degree from the University.

A three-year letterwinner from 2002-2004 after transferring from Notre Dame, Schmidt was a three-time All-America selection in her career, including two honors while at LSU. In her senior season, she led the Tigers to within seven outs of the national championship game. For her performance in the tournament, she was named the Women’s College World Series Most Outstanding Player, the only player in the tournament’s history to win the honor from a team who did not win the national championship. Despite playing only three seasons at LSU, Schmidt ranks second in career wins, strikeouts and innings pitched, and is third in career games started, earned run average and shutouts.

One of the greatest pitchers in Southeastern Conference history, Sneed was a four-year letterwinner from 1999-2002. A three-time All-American, she was named the SEC Player of the Year in 2001 and the SEC Pitcher of the Year in 2002 when the award saw split to honor both a pitcher and a hitter. Six years after the conclusion of her playing career, she still ranks second in the SEC in career wins, shutouts and strikeouts and holds the LSU records in all three of those categories. Sneed also holds the LSU record with 10 complete-game no-hitter and three combined no-hitters. On March 18, 2001, she combined for one of only three perfect games in school history.

A four-year letterwinner from 2004-2007, Turner earned All-America honors in 2006 and was named the Louisiana Pitcher of the Year. She earned All-SEC honors in both 2005 and 2006 and was a member of the NFCA All-South Region team n 2006 and 2007.  In four seasons, she moved up to second in career shutouts, games started, and complete games and ranks third in career wins, saves and strikeouts. On two occasions she was named the USA Softball National Player of the Week, the only Tiger to ever earn the honor twice in their career.