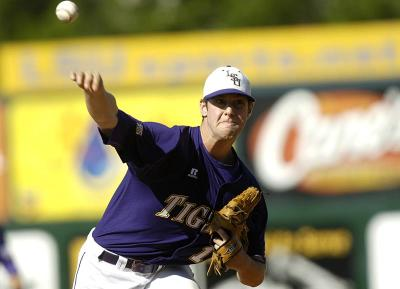 The game will be carried by the affiliates of the LSU Sports Radio Network. The Baton Rouge affiliate is WDGL 98.1 FM. Live video and audio of the games may be accessed in the Geaux Zone at www.LSUsports.net.

The game will be televised by Cox Sports Television, and it can be seen in Baton Rouge on Cox Cable Ch. 37.

LSU won all five of its games last week, including a three-game Southeastern Conference sweep of No. 9 South Carolina in Alex Box Stadium. The Tigers, who are third in the SEC West with a 9-11-1 league record, resume conference play this weekend at No. 18 Kentucky.

“We had a great week with five straight wins, and we’re looking forward to building upon that momentum this week,” said LSU coach Paul Mainieri. “I’m so happy that our players are being rewarded for their hard work, but our schedule remains very challenging. UL-Lafayette has a tremendous program, and I know we’ll have a highly competitive game on Tuesday night.”

The sweep over South Carolina was LSU’s first in the SEC since 2006 when LSU won three straight at Auburn. The series victory over the Gamecocks was also the Tigers’ first SEC sweep at home since LSU swept Tennessee at Alex Box Stadium in 2003. LSU batted .319 (36-for-113) in the South Carolina series, scoring 28 runs and collecting eight homers, four doubles and one triple

Sophomore designated hitter Blake Dean paced the Tigers at the plate in the South Carolina series, batting .462 (6-for-13) in three games with one double, one run and two RBI. For the entire five-game week, Dean hit a sizzling .571 (12-for-21) with three doubles, two homers, four RBI and five runs.

LSU was a perfect 10-for-10 in stolen base attempts in its five games last week, including 4-for-4 in the South Carolina series. The Tigers’ opponents were just 2-for-4 in stolen base attempts last week, as freshman catcher Micah Gibbs threw out two runners attempting to steal. Gibbs has thrown out 10 of 29 base runners attempting to steal this season, a success rate of 35 percent.

LSU leads the overall series between the schools, 43-21, and Tuesday’s game will mark their first meeting since the 2002 NCAA Baton Rouge Regional in Alex Box Stadium. LSU defeated ULL twice in the championship round of the regional ? by identical 12-2 scores ? to advance to the NCAA Super Regional round.

The Tigers have won four of the six meetings with the Cajuns this decade.

PROMOTIONS
Alex Box Stadium Countdown: Blair Barbier (He will be available for autographs from 5:30 p.m. to 6:30 p.m. and after the 5th inning behind the Tiger Terrace.)
Kids Take the Field for the Anthem: Kids (ages 12 and under) can take the field with LSU players for the National Anthem. Kids are to assemble at the left or right field bullpen gates 15 minutes before first pitch.
Final Season Prize Bonanza: Enter to win great raffle prizes with the purchase of a hot dog/big gulp combo at any concession stand. Tuesday’s Prize: Free Cox Digital Cable for a year