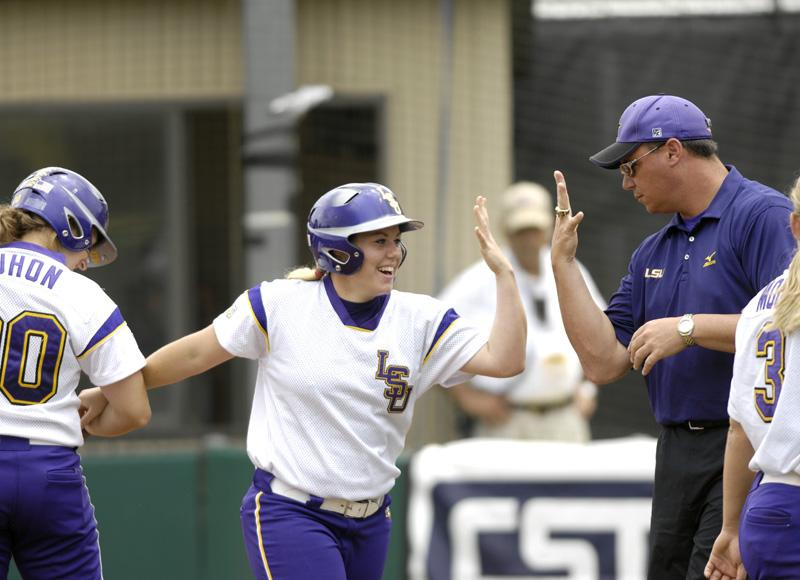 BATON ROUGE — LSU sophomore Rachel Mitchell was named the Southeastern Conference Player of the Week, it was announced by the league office on Monday.

The LaPorte, Texas, native led the Tigers to a 4-0 record last week, including a sweep of Arkansas to guarantee LSU a position in the SEC Tournament at Tiger Park and a finish no worse than sixth in the overall league standings. Mitchell was an amazing 8-for-10 at the plate for a .800 batting average, including a .857 average against the Lady Razorbacks in league play.

In four games, the outfielder recorded a double, a triple and three home runs for a 2.000 slugging percentage. Adding in four walks, Mitchell recorded a .857 on base percentage for the week. The 2007 NCAA Palo Alto Regional Most Valuable Player also posted seven RBIs, including three in the series finale against Arkansas.

Against the Lady Razorbacks in game three, Mitchell tied the LSU single-game record with a pair of home runs. It also marked her ninth and 10th home runs of the season, making her only the second player in Tiger softball history to record two double-figure home run seasons. Last year, Mitchell led the team with 12 home runs and is tied for the team lead with 10 this year.

In only her second season of collegiate play, she moved into a tie for eighth place in career home runs in LSU history. In all four games last week, Mitchell recorded multiple hits and extended her hitting streak to six games. She has now posted a hit in 16 of her last 18 games, already surpassing her season hit and RBI totals from last year in 11 fewer games.

The Tigers will close out the regular season on the road this week. LSU will face in-state rival Southeastern Louisiana at North Oak Park on Wednesday at 6 p.m. This weekend, the Tigers will travel to Columbia, S.C. for a three-game series against South Carolina. The series will begin with a doubleheader on Saturday at noon CDT and conclude with a single game on Sunday at noon CDT. All four games of the series will be broadcast on the LSU Sports Radio Network in Baton Rouge on The X ? 104.5/104.9 FM and in the Geaux Zone on LSUsports.net.