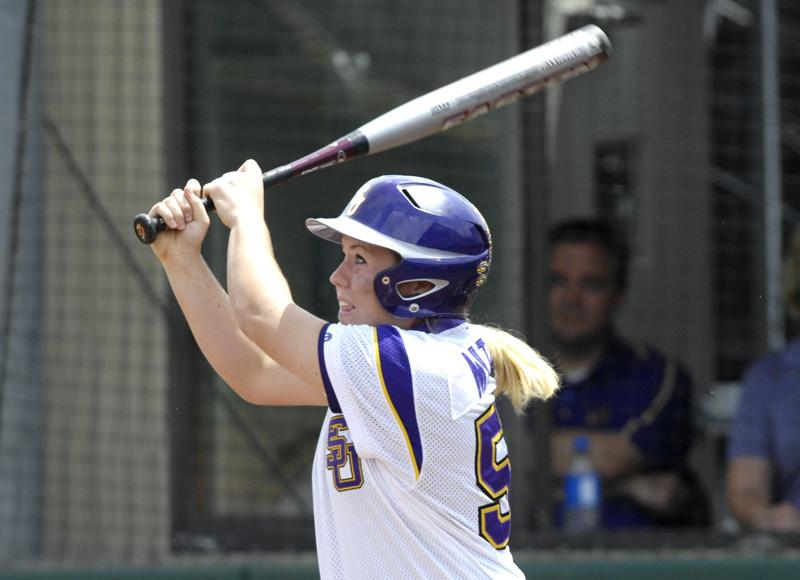 BATON ROUGE — Two home runs by Rachel Mitchell and a complete-game shutout by Cody Trahan led No. 15 LSU to the series sweep of Arkansas, 4-0, on a rainy Sunday afternoon at Tiger Park.

The more than 1,000 fans watched the Tigers earn the win despite a 30 minute rain delay. LSU improved to 38-14 on the season and 15-10 in Southeastern Conference play. The loss dropped the Lady Razorbacks to 33-25 overall and 6-19 in league play. The contest marked the final regular season game in Tiger Park, which was sent off with fireworks in both the sixth inning and at the conclusion of the game.

“It’s funny how fortunes can change,” said LSU head coach Yvette Girouard. “You think you might not get to play any games, much less all three, and then we get the sweep. We had some great pitching performances from Cody, some of our bats are coming around and we made some great defensive plays. The crowd was great and we had a terrific senior day with awesome fireworks telling the park goodbye.”

For the weekend, Trahan earned all three wins, including a pair of complete-game shutout victories and a win in relief. The sophomore allowed only three hits on the day and seven on the weekend as opponents hit .146 against her. On Sunday, she walked only the leadoff batter of the game and struck out five.

“Cody stepped up huge for us,” said Girouard. “She probably still made some mistakes, but she made far less. She had her change-up really working, which I think set up her whole game.”

Mitchell tied the LSU single-game record with a pair of home runs, accounting for three of the Tigers’ four runs in the game. For the weekend, the sophomore went 6-for-7 with a triple, two home runs, four RBIs and five runs scored. She was also walked three times for an on base percentage of .900 and a slugging percentage of 2.000.

“I told Rachel about two weeks ago that we had her in the three-hole and she had to be the Leslie Klein for us,” said Girouard. “I did not want to see her coming back to the dugout with the bat on her shoulders. I wanted her to go up there and swing. We have here there for RBIs and to swing the bat.”

After going up and down in order in the first and second, Mitchell put LSU on the scoreboard in the bottom of the third. With one out, she pounded a 2-0 pitch over the back fence and onto Cypress Street outside of Tiger Park to give LSU the 1-0 advantage.

The Tigers added three more runs in the bottom of the fifth inning. Shannon Stein, the hero of the second game, led off the inning with a walk. Mitchell then drove a full count pitch over the fence in right field to put LSU ahead, 3-0. The home run was the 10th of the season for Mitchell, who became just the second player in Tiger softball history to record double-figure home runs twice in her career. In only her second season at LSU, she is now tied for seventh all-time in career home runs.

With two outs following the Mitchell home run, Killian Roessner doubled to right center field. With Tiffany Shaw pinch running for Roessner, Shaw scored from second on an RBI single up the middle by Erika Sluss to run the score to 4-0.

After walking the leadoff batter of the game, Trahan settled down to retired the next nine batters in order before a fielding error by Jessica Mouse in the top of the fourth put the second Arkansas runner on base in the game. Trahan then retired four more in a row before giving up the first single of the game, a hard hit ball off the ribs of Mouse at third in the fifth. The Lady Razorbacks recorded another single in the sixth and one in the seventh, but did not have either runner reach second as Tayl’r Hollis stepped on the bag at second for the last out of the game.

Kim Jones started and took the loss for Arkansas to fall to 5-3 on the season. She allowed two runs on four hits with three walks and two strikeouts in four innings. Katy Henry, who took both losses on Saturday, came on in the fifth and gave up two runs on three hits in a third of an inning. Miranda Dixon closed out the game, allowing one hit and recoding a strikeout in the final inning and two-thirds.

LSU will close out the regular season on the road this weekend. The Tigers will face Southeastern Louisiana in a mid-week game on Wednesday at 6 p.m. at North Oak Park in Hammond. LSU will then travel to Columbia, S.C., for the final SEC series of the season. The Tigers will face South Carolina in a doubleheader on Saturday beginning at noon CDT and in a single game on Sunday at noon CDT.

The following week, LSU will host the 2008 SEC Softball Tournament at Tiger Park. The three-day tournament begins with four games on Thursday, followed by the semi-finals on Friday and the championship game on Sunday at 12:30 p.m. With the sweep this weekend, the Tigers guaranteed themselves a spot in the tournament and are now assured of finishing no worse than sixth, with the chance of moving as high as the third seed.