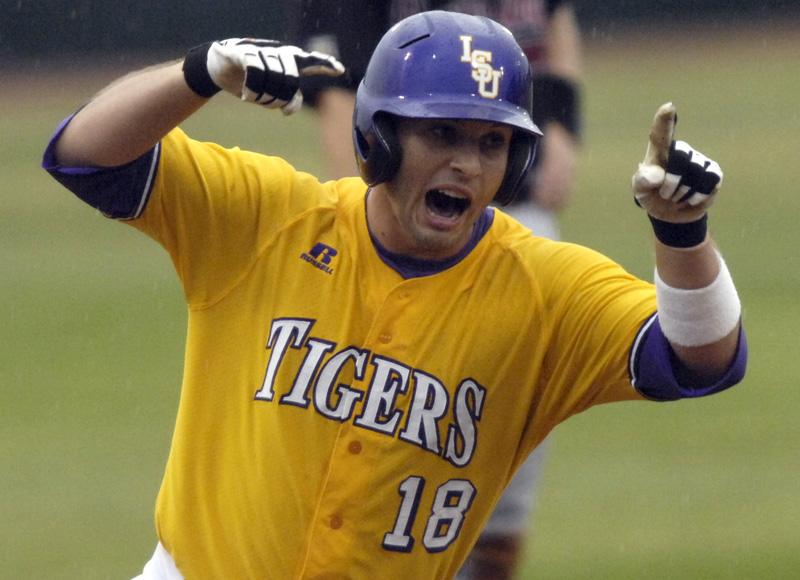 BATON ROUGE — Infielder Chris McGhee scored the game-winning run in the bottom of the 11th inning Saturday as LSU capped off an extraordinary comeback Saturday to defeat ninth-ranked South Carolina, 11-10 in a rainy Alex Box Stadium.

LSU and South Carolina face off in the series finale Sunday at 1 p.m. CT. The contest will be televised by the Jumbo Sports Network and can be seen in Baton Rouge on Cox Cable Ch. 16.

Additionally, the game can be heard on the LSU Sports Radio Network (WDGL 98.1 FM in Baton Rouge), and live video and audio may be accessed in the Geaux Zone at www.LSUSports.net.

Pinch-hitter Nicholas Pontiff launched a dramatic, two-run shot in the seventh to knot it up, 9-9.

After two scoreless frames in the 9th and 10th, the Gamecocks notched a run against right-hander Jared Bradford in the top of the 11th, but the Tigers didn’t flinch.

Down a run in the bottom of the 11th, the Tigers capitalized on some crucial Gamecocks’ miscues. Third baseman Michael Hollander reached second on a throwing error, advanced to third on a wild pitch, and tied the game on a fielding error by left fielder Andrew Crisp.

McGhee, who reached first on Crisp’s error, advanced to second on a grounder by right fielder Derek Helenihi and subsequently stole third base. The junior scored the game-winner on a fielding error by second baseman Scott Wingo, the Gamecocks’ third miscue of the inning.

“I was just so happy for the kids,” LSU coach Paul Mainieri said. “It was an incredible comeback. The entire team contributed to the victory, which is what you love to see.”

Bradford (7-4) was credited with the victory as the senior hurled four clutch innings, including two in extra innings, and surrendered only one earned run.

“Bradford is such a courageous guy,” Mainieri added. “I love him to death because he competes right down to the very end.

“I can’t think of another pitcher I’d rather have on the mound in extra innings than Bradford.”

Left fielder Blake Dean recorded three hits on the day, and McGhee scored three runs, all after the start of the sixth inning. Shortstop D.J. LeMahieu finished 2 -for- 4 and extended his hitting streak to an LSU season-high 10 games.

South Carolina scored five runs in the first two innings and added two more in the fifth and sixth to take a 7-0 lead.

The Tigers got back into the game with a three-run sixth. McGhee crossed the plate on a grounder by Dean. Catcher Micah Gibbs then drilled a double off the wall in left center field, and pinch-hitter Sean Ochinko blasted a two-run dinger over the left field bleachers as LSU reduced the deficit to 7-3.

However, the Gamecocks would strike back in the seventh on right fielder Harley Lail’s solo homer to go up 8-3.

LSU continued to peck away at South Carolina’s lead in the bottom of the seventh as the Tigers cut the lead to within one run, 8-7. Dean singled in a run, and the Tigers scored two more on a costly throwing error during a rundown. Gibbs sacrificed Dean on a deep fly ball to left field to notch the fourth run of the frame.

South Carolina tallied a run in the eighth on an RBI single by Disher. The Gamecocks took a 9-7 advantage, but the Tigers battled back to tie it up on Pontiff’s homer.

South Carolina’s Parker Bangs (3-2) was charged the tough loss. The right-handed didn’t allow a hit in three innings and both runs charged to him were unearned.