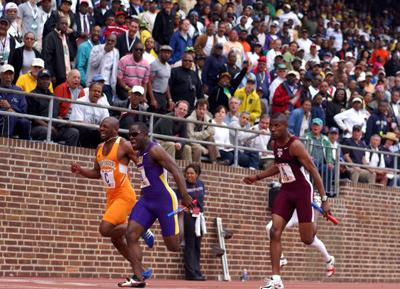 PHILADELPHIA — The 114th running of the Penn Relays proved to be unlike any other for the top-ranked LSU track and field teams as the squads wrapped up the competition Saturday with a meet record six Championship of America titles during the three-day relay carnival.

With four relay titles already under their belt entering Saturday’s action, LSU put an exclamation point onto the end of this year’s event by winning the men’s 4×100 and the women’s 4×800 titles before a crowd of 49,831 at historic Franklin Field.

By winning six relays at this year’s meet, the Tigers and Lady Tigers blew away the competition as Texas finished a distant second with three titles.

This weekend has been history in the making for LSU as its six Championship of America relay titles is a combined record for men’s and women’s teams at one university in one year at the Penn Relays, eclipsing the mark of five set by Villanova in 1978 and equaled by LSU in 2007.

“The Penn Relays is certainly one of the most unique events in all of track and field, and you can just feel the history when you walk into Franklin Field,” said LSU head coach Dennis Shaver. “With all the great teams that come here each year, it’s a testament to the competitiveness of our kids to line up and win that many relays in one weekend.

“We’ve certainly had our share of history-making moments this weekend, and our kids can take a lot of pride in knowing that they accomplished something that no team has ever done before.”

The top-ranked men’s 4×100-meter relay team was the first to step onto the awards stand as it successfully defended its Championship of America title that it has now won four years in a row and eight times all-time at the Penn Relays.

The Tigers led off the relay with sophomore Armanti Hayes before giving way to senior Richard Thompson on the back stretch and freshman Gabriel Mvumvure on the third leg.

Junior Trindon Holliday was even with Tennessee’s Rubin Williams and Texas A&M’s Chris Dykes when he got the stick on the anchor and beat Williams to the finish line by only two one-hundredths of a second as the Tigers finished with a time of 39.18. With the Lady Tigers winning on Friday, this marks the second straight year that LSU has swept 4×100 titles at the Penn Relays.

“This meet definitely gave us a preview of the NCAA final because we had the top five sprint relay teams all running at this meet,” Shaver said. “Trindon Holliday is a guy that just knows how to compete, and I’ve got a lot of confidence with him anchoring our team. That’s always one of the most exciting races at this meet each year, and today was no different.”

The Lady Tigers followed by winning their second 4×800-meter relay all-time and their first since 1987 with the fourth-fastest time in school history at 8 minutes, 30.98 seconds.

After junior Lindsay Day, junior Kayann Thompson and freshman Brittany Hall carried the stick on the first three legs, NCAA indoor champion and Philadelphia native LaTavia Thomas took the baton on the anchor trailing Tennessee’s Sarah Bowman. But Thomas ripped off a 2:03.8 split to beat Bowman (2:06.1) to the finish line. The Lady Volunteers finished the race in 8:32.60.

For her effort, Thomas was named this year’s College Women’s Athlete of the Meet for relay events as she also anchored the Lady Tigers to victory in the sprint medley relay on Friday night.

A graduate of West Catholic High School in Philadelphia, Thomas joins a select group of Lady Tiger greats to be recognized as the meet’s top women’s collegiate relay runner, including Cheryl Taplin in 1994, D’Andre Hill in 1996 and Muna Lee in 2003.

“LaTavia grew up competing in this meet, and I know it was special for her to come back home and run as well as she did this weekend,” Shaver said. “She has proven to us time and time again that she can line up and get the job done. The thing I’m most impressed with about LaTavia is the way she competes. She’s certainly deserving of any recognition she gets.”

In addition to their six relay titles, LSU athletes won four individual titles on the weekend to bring their total number of wins at this year’s meet to 10. LSU’s four individual winners ties a team record for the Penn Relays as the squads combined for four individual champions in 2002.

After anchoring the Lady Tigers’ shuttle hurdle relay team to a new collegiate record of 52.77 on Friday afternoon, junior Nickiesha Wilson became the sixth Lady Tiger in meet history and the second in a row to win the 100-meter hurdles as she finished the race in 13.03.

The excitement was not limited to the track as two Tiger throwers kicked off the day’s events by picking up victories in the championship sections of the hammer throw and the javelin.

Junior Rabun Fox made history during the morning session as he became the first Tiger in the 114-year history of the Penn Relays to win the hammer competition after uncorking a throw of 208 feet, 8 inches to finish a mere two inches ahead of Paul Peulich of Manhattan (208-6).

Fellow junior Chad Radgowski ended a dry spell of his own as he became the first LSU thrower to win the championship javelin since former Tiger Mark Morris in 1991 after unleashing an impressive throw of 228-8. In fact, the Tigers finished 1-2 in the javelin as sophomore Preston Chatham was this year’s runner-up with a mark of 219-9.

This success in the field comes on the heels of sophomore Katelyn Rodrigue becoming the first Lady Tiger to win the pole vault championship at the Penn Relays on Friday night with a new school record clearance of 13-7 ?.

“I thought we really had a total team effort this weekend,” Shaver said. “We won a lot of relays, but we also had quite a few athletes step up big and win their individual events. We saw some great performances across the board, from the jumps, the throws, the sprints and the hurdles. I’m very pleased with the way our kids showed up this weekend ready to compete.”

The regular season has come to an end for LSU, and the Tigers and Lady Tigers will break for three weeks before kicking off the championship season with the 2008 SEC Outdoor Track and Field Championships as the meet is scheduled to run from May 15-18 in Auburn, Ala.