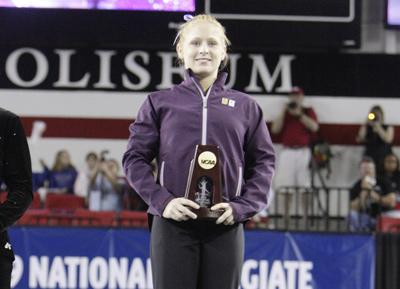 ATHENS, Ga. — Susan Jackson of the LSU gymnastics team finished her sensational sophomore season in grand fashion as she won the national vault title Saturday night in the NCAA Individual Event Finals at the Stegeman Coliseum.

The individual national title marks the first for Jackson and just the fourth in LSU school history as April Burkholder won the beam title in 2006, Nicki Arnstad won the floor title in 2002 and Jeanie Beadle won the AIAW beam championship in 1977.

“I don’t think what happened has sunk in yet,” Jackson said. “It was tough with three straight all-around performances. Tonight my legs were a little tired but I was able to pull it off. The main thing was that we reached the Super Six for the first time and that was exciting. Winning the vault was just bonus.”

Competitors had to complete two different vaults in the event final. Jackson hit the top combined mark of 9.8563 after first scoring a 9.9000 on her yurchenko full and then a 9.8125 on her 1 1/2-twisting yurchenko.

“Coming into tonight, our three kids were a little numb with excitement about being here,” LSU head coach D-D Breaux said. “The main thing about individual finals is to have fun. There is a lot of pressure in the vaulting event because kids have to compete differently then they have all year long with the two vaults.

“Susan had done a yurchenko with a twist all year. She is just a natural athlete. She executed a beautiful 1 1/12 yerchenko vault and was one of the few that did both vaults at a high level. She absolutely deserved to win as she was head and shoulders above the field.”

Jackson also competed on floor where she scored a 10th-place mark of 9.8625. The five-time All-American closed out her outstanding night with a 9.850 on beam to finish tied for seventh with Georgia’s Tiffany Tolnay.

Junior Ashleigh-Clare Kearny opened the evening’s competition on bars. The Manchester, Conn., native scored a 9.8875 to tie for fourth. Clare-Kearny also competed on floor where she posted a 12th-place score of 9.7625.

Sophomore Summer Hubbard competed on bars and scored a 9.7625 to finish tied for 17th.

CBS will air the NCAA Gymnastics Championships on Saturday, May 10 from 2-4 p.m. CT.

“This trip has been exciting,” Breaux commented. “It has been a great season and we finished the season with the team reaching new pinnacles and reaching the Super Six.”

Vault Champion: Susan Jackson, LSU; 9.8563
“I want to thank Georgia for their great hospitality while hosting the NCAA’s this year. I was so excited to make it to the Super Six and winning the vault championship tonight was just an extra bonus.”

LSU Head Coach D-D Breaux
“Susan trains one vault throughout the year. The vault was not a favored event but she trained for two routines in loose foam just towards the end of the season. It was just pure athleticism.”

Uneven Bars Champion: Tasha Schwikert, UCLA; 9.9375
“I just want to thank the University of Georgia. This has definitely been the best NCAA championship I’ve been to in the past four years. I could not have asked for a better way to go out especially since  I have had some achillies heel troubles.  I just want to thank my coaches and teammates, and especially Coach Valorie. There is no way I could have done this with out her.”

UCLA Head Coach Valorie Kondos Field
“Tasha is a rare breed. She is a thoroughbred and when she is focused she is razor sharp, you don’t mess with her.  When she is in the zone you just let her go. Just like a thoroughbred, you just let go of the reigns and let her go. If she needs anything she lets you know. She is just a natural-born athlete. She could have chosen any five sports and would have been a national champion or olympian.”

Beam Champion: Grace Taylor, Georgia; 9.9500
“I want to thank Courtney for her inspiration and the team for all they’ve done. They were right there with us on every routine. I also want to thank God and this awesome crowd! All of the athletes were tired because we left everything we had out there on the floor last night. That’s what made it fun though. There wasn’t any stress tonight and we didn’t expect anything, so we just got to perform for the joy of gymnastics. We feed off of each other. She (Courtney McCool) makes me better and seeing her having fun kept it fresh in my mind.”

Floor Champion: Courtney McCool, Georgia; 9.9625
“I just want to thank Georgia and all of the fans for what they’ve done for us. I also want to thank God because I prepared, but then He went out there and did it for me. It was just fun to let everything out on floor. Competing on floor has been so much fun for me this year. I had an amazing opportunity and felt great out there for that event.”

Georgia Head Coach Suzanne Yoculan
“The team national championship was a culmination of the last four years here with the seniors building a strong program and tradition. The good thing about Courtney and Grace is that they’re sophomores so they’ll both be back next year. The future is bright for Georgia and I think we’re in the position to go out there and compete for a national championship every year.”