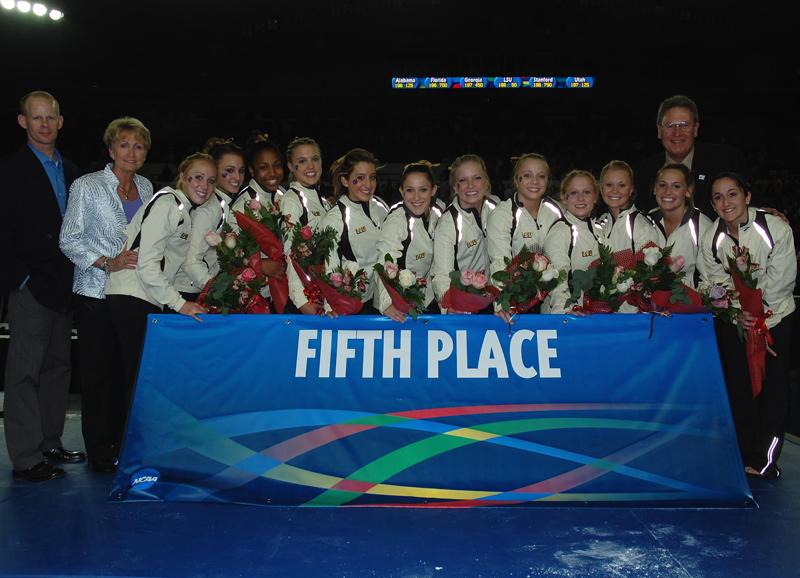 ATHENS, Ga. — The LSU gymnastics team ended its historic season Friday evening by finishing fifth with a score of 196.350 in its first appearance in the NCAA Super Six at the Stegeman Coliseum.

LSU’s fifth place finish is the highest the Tigers have finished since their fourth place performance in 1988. The Super Six format started in 1993.

The Tigers were one of four Southeastern Conference teams to compete in the Super Six. Georgia won its fourth-straight national title with a score of 197.450. Utah finished second with a 197.125 mark. Stanford placed third (196.750) and Florida placed fourth (196.70). Alabama scored a sixth place mark of 196.125.

“We could have done better but we just have to learn how to handle the pressure and the crowd noise,” LSU head coach D-D Breaux said. “All of that is good experience and we have young girls out there. Am I pleased with begin fifth? Absolutely. I’m proud of the effort from the girls this whole weekend.”

LSU’s season will officially come to a close Saturday when junior Ashleigh Clare-Kearney, sophomores Susan Jackson and Summer Hubbard compete in the Individual Championships beginning at 5 p.m. CT. Jackson, who placed second in the all-around of the first preliminary session on Thursday, will compete on beam and floor. Clare-Kearney will compete on floor and bars, while Hubbard will compete on bars.

LSU opened on floor with a 49.125 paced by co-SEC Gymnast of the Year Clare-Kearney’s 9.900. Jackson and freshman Samantha Engle rounded out LSU’s top-three floor performances by scoring 9.875 and 9.850, respectively.

In the third rotation LSU was on vault. All-Americans Clare-Kearney and Jackson tied for the team high by posting a 9.925. Freshmen Nicole Lyons and Staci Schwitkis also captured solid scores by hitting marks of 9.850 and 9.800, respectfully.

“The experience was huge for the underclassmen,” Breaux commented. “When we come back next year we will have new freshman but these kids will be a year older, more experienced and hopefully better fit and better gymnastics. I think they realize that we need to improve and they know what to do.”
The Tigers were in fourth place at the end of the third rotation with each team completing two events. LSU’s score of 98.375 trailed Georgia (98.700), Stanford (98.400) and Utah (98.375) at the midway point.

LSU had their second bye before going on bars in the fifth rotation. Clare-Kearney’s strong evening continued on bars as she captured a 9.900. Hubbard and Schwitkis each posted a 9.850 to give the Tigers a 49.200 in the event and put their overall score at 147.550 heading into the final rotation.

Clare-Kearney ended the night by scoring a 9.900 or better in all four events as she posted a 9.900 on beam in the final rotation.

The Super Six marked LSU’s lone senior Kristi Esposito‘s final competition as a Tiger. The Slidell, La., native joined the Tigers in 2006 after transferring from the University of Nebraska. Esposito earned All-American honors four times during her career ? three times on beam (2004, 2005, 2007) and once in the all-around (2004).

Breaux designated Esposito the team captain for the Super Six and said the three-time Academic All-American was a “true leader” during her LSU career.

“She had two super events tonight and I think she just got outside herself on beam,” Breaux added. “Her series was good; she just lost sight of the beam. She came back and had a beautiful dismount. This was her last meet and she went out strong and left everything in the competition. Her performance over her career was great. She is truly a leader on this team in performance and outside.”