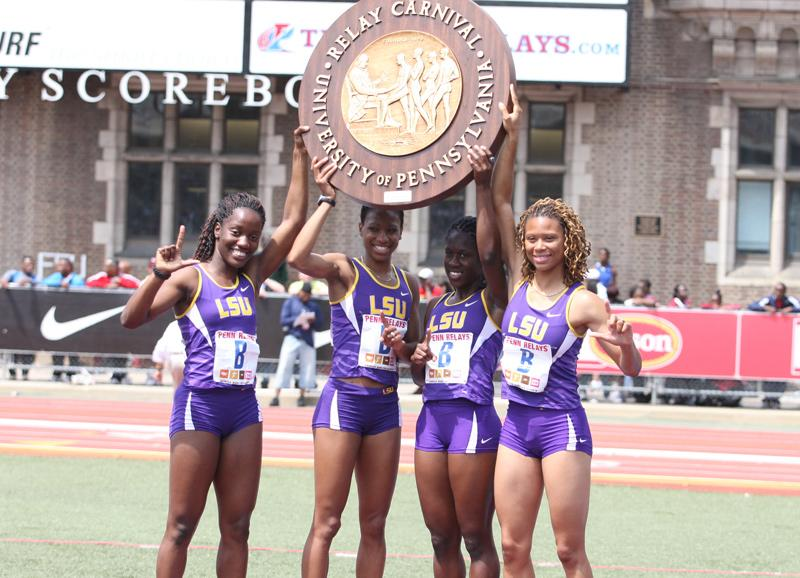 PHILADELPHIA — Friday proved to be another record-setting day for the top-ranked Lady Tigers at the 114th Penn Relays as the squad won three relay titles while setting a new meet record in the 4×100 and a new collegiate record in the shuttle hurdle relay.

In the 114-year history of the nation’s premier relay carnival, no 4×100-meter relay team has dominated the competition quite like the Lady Tigers as the squad opened Friday’s action with 11 Championship of America titles and the meet record of 42.73 seconds to its credit.

The Lady Tigers continued their domination at Franklin Field on Friday by shattering their own meet record with the third-fastest time in the history of women’s collegiate track and field at 42.59 to win their 12th Championship of America title all-time in the event.

LSU’s 4×100-meter relay has set the standard by which all other sprint relay teams are measured at the Penn Relays as Texas and Murray State sit a distant second with three titles apiece.

“If you think about the great sprint relay teams that have run at this meet over the years, that was quite an accomplishment by our women for doing what they did today,” said LSU head coach Dennis Shaver. “I hope people understand how significant it really is to run 42.59 on this track at this meet. That’s one of those records that may stand for quite some time.”

The Lady Tigers, who entered the meet with the NCAA’s fastest time this season at 42.84, lined up to the outside of the nation’s second-ranked squad from Texas A&M. After opening with Brooklynn Morris, Samantha Henry and Juanita Broaddus, senior Kelly Baptiste took the stick on the anchor trailing Aggie freshman Gabby Mayo by about three meters.

But with a lively crowd of 39,904 rising to its feet, Baptiste ran down Mayo on the straightaway and crossed the finish line with the second-fastest low-altitude time in NCAA history. The Aggies finished with the fifth-fastest time in collegiate history at 42.69.

“I felt like I had a responsibility to win when I got the stick,” Baptiste said. “I knew that I had my teammates behind me, and the crowd reaction gave me some extra motivation running down the straightaway. Their lead wasn’t as far as it was at the Texas Relays, so I was pretty confident that I was going to win when I got a clean exchange.

After their record-setting performance in the 4×100-meter relay, the Lady Tigers followed later in the afternoon by setting a new collegiate record of 52.77 to win the shuttle hurdle relay.

The win marked the first time since 2006 that LSU’s shuttle hurdle relay team had climbed to the top of the podium as the foursome of Tenaya Jones, Angel Boyd, Jessica Ohanaja and Nickiesha Wilson broke the 7-year-old collegiate record of 52.85 set by Illinois in 2001. It is also the eighth time that the Lady Tigers have won the Championship of America title in the event.

The LSU women didn’t stop there as they capped the evening by winning their fourth title all-time in the 1,600-meter sprint medley relay en route to being named the School of the Day. The team of Henry, Baptiste, Deonna Lawrence and LaTavia Thomas clocked a winning time of 3 minutes, 46.65 seconds to finish nearly six seconds ahead of their nearest competitor.

With their three relay victories on the afternoon, the Lady Tigers have overtaken Villanova (36) for the all-time lead in Championship of America titles at the Penn Relays as they now claim 38 relay wins at the nation’s premier collegiate relay meet.

The Tigers made some history of their own as they followed the Lady Tigers effort in the sprint medley by winning their first ever Championship of America title in the event to bring their all-time total to 17 relay titles since winning their first at the Penn Relays in 1935.

The men’s foursome of Trindon Holliday, Richard Thompson, Reggie Dardar and Elkana Kosgei combined to run the third-fastest time in school history at 3:16.68.

“A lot of history was made today by both of our teams, and I’m proud of our kids for the effort and the competitiveness that they showed,” Shaver said. “We have a chance to make even more history tomorrow. The most relay titles that have been won by one team in one year at this meet is five, and we’ve got an opportunity to pick up a couple more.”

Friday also saw some outstanding performances in individual events for LSU athletes as junior Ricky Jean-Francois finished runner-up in the championship section of the shot put with a throw of 58 feet, 8 inches, while senior Nedra Gross recorded a new personal best and improved regional qualifying mark of 41-2 ? to take seventh place in the college section of the triple jump.

The purple and gold will be on display on Saturday as the Tigers and Lady Tigers combined for five individual and three relay qualifiers into championship finals on Friday afternoon.

After leading the Lady Tigers to the shuttle hurdle relay title, Wilson ran the fastest preliminary time in the 100-meter hurdles with a wind-legal 13.04, while Ohanaja followed in third place with a prelim time of 13.21. Senior Ryan Fontenot will run in the final of the men’s 110-meter hurdles after qualifying second with a time of 13.85.

In addition, freshmen Gabriel Mvumvure and Kenyanna Wilson qualified for the championship finals of the 100-meter dash in their first ever appearance at the Penn Relays. Mvumvure qualified for the men’s final with the fourth-fastest prelim time at 10.51, while Wilson advanced to Saturday’s competition with the sixth-fastest time of the prelim round at 11.69.

Three relay teams also advanced into Championship of America finals on Saturday as the men’s 4×100-meter relay led the way with the second-fastest time of the day at 39.49.

The Tigers also advanced their 4×400-meter relay team after clocking a time of 3 minutes, 6.64 seconds to finish sixth in the prelim and earn lane four in the finals. The women’s 4×200 relay also advanced with the third-fastest preliminary time at 1:32.56.

After winning four relay titles during on Friday, six more Championship of America relay titles will be up for grabs for the Tigers and Lady Tigers on Saturday as the action is set to kick off at 12:40 p.m. CDT. The meet will be broadcast live to a national television audience as ESPN2 will carry two hours of coverage beginning at 1 p.m.