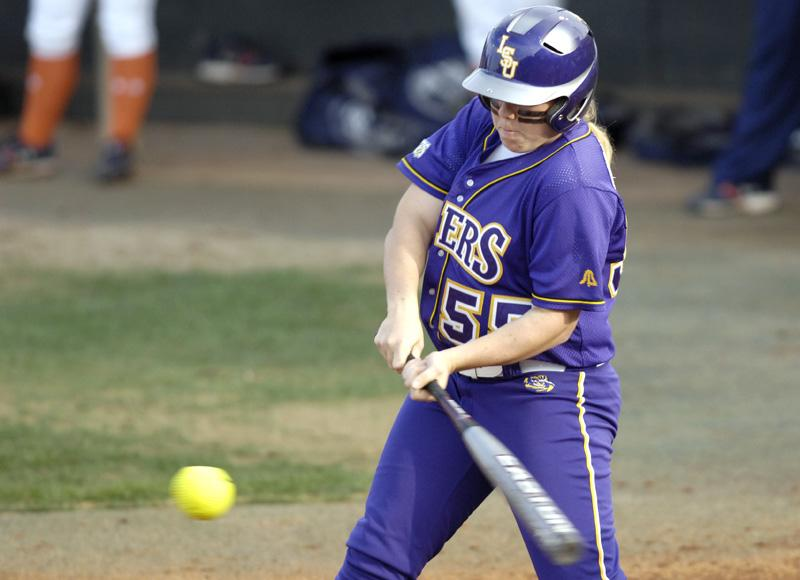 BATON ROUGE — The 15th-ranked LSU softball team will close out the regular season home schedule this weekend as the Tigers face Arkansas in a three-game Southeastern Conference series beginning with a doubleheader on Saturday at 1 p.m. and concluding with a single game on Sunday at 1 p.m.

On Saturday, it will mark the annual “Bark in the Park” day as dog owners are encouraged to bring their family friendly canines to Tiger Park on a leash. Fans that donate a pet supply item like flea medication, collars and leashes, and pet toys, at the game to the Capital Area Animal Welfare Society (CAAWS), will receive FREE admission and the first 250 fans will receive FREE LSU ID tags. Contests will take place throughout the doubleheader, including the best dressed LSU dog, cutest puppy and I look like my dog contests.

LSU will celebrate its seven-person senior class and senior manager on Sunday. Fans who wear gold can get into the game for FREE and the first 250 fans can receive a commemorative Tiger Park mini bat celebrating the final regular season game in Tiger Park. Following the game, the Tigers will hold a ceremony to honor their seniors.

Entering the series with a record of 35-14 overall and 12-10 in SEC play, LSU is currently fourth in the league standings, a game and a half back of third place Tennessee. With one win this weekend, the Tigers will clinch a berth in the SEC Tournament. Overall conference leader Florida, Western Division leader Alabama and the Lady Vols have all clinched berths in the tournament, which will be held in two weeks at Tiger Park.

“It’s pretty imperative that we win at least one game this weekend to guarantee that we get into the tournament at Tiger Park in early May,” said LSU head coach Yvette Girouard. “This is a crucial time in the season with Arkansas at home and then South Carolina on the road to close out the conference season.

Following last weekend’s play, the NCAA released its second RPI rankings of the season, which are used for NCAA Regional purposes. After coming in fifth in the first rankings, the Tigers dropped two spots to No. 7 in the current rankings, but remain in the top 10.

LSU is considered to have the second toughest strength of schedule in the nation, behind only Arizona, which is ranked No. 8 in the RPI. Conference rivals Florida and Alabama sit at No. 1 and No. 2, while Tennessee is No. 9, Georgia is No. 13, Auburn is No. 16 and Mississippi State is No. 19, giving the SEC and amazing four teams ranked in the top 10 and seven teams ranked in the top 20.

“We have to keep persevering,” said Girouard. “We have remained very positive with the team. We keep telling them that this is a sport that if you have the talent and get hot, then things can turn around. It can happen at any given time. We are realistic in knowing we can reach all of our goals. We can’t win the West and we can’t win the overall SEC championship, but we can still accomplish a lot of our goals. We can still win the tournament, we can still win Regionals and Super Regionals and we can still go to the World Series.”

Arkansas enters the series with a 33-22 overall record and a 6-16 record in SEC play. The Lady’Backs have lost four of their last five, including the series at home to Ole Miss and being swept in a doubleheader by No. 1 Alabama. Arkansas sits at ninth in the conference standings, one place out of a berth in the tournament, but only one win behind eighth-place South Carolina with two weekends remaining.

Senior Quinlan Duhon and sophomore Rachel Mitchell have been on fire at the plate as of late for the Tigers. Both players are hitting over .400 in the last 16 games, while the next best average on the team is .275 and the team average is only .260. Duhon is batting a team-leading .415 with two doubles, three home runs, six RBIs and nine runs scored. Mitchell is hitting at a .412 clip, which included a career-high 10-game hitting streak, while posting three doubles, four homers, 13 RBIs and seven runs scored.

For the season, Mitchell leads LSU with a .355 average, including a team-best 40 RBIs and 33 runs scored, while tying for the team lead with 12 doubles. In addition, she is one off the pace for the team high with eight home runs and two triples. Mitchell has also stolen 10 bases, the third most on the team.

Dee Dee Henderson leads the Tigers with 30 stolen bases, becoming just the second player in LSU softball history to record 30 steals in a single season. For her career, Henderson ranks second in career stolen bases in school history and sixth in SEC history. Jazz Jackson has posted a career-best 20 stolen bases, followed by Mitchell with 10 and Tiffany Shaw with nine.

Kayla Johnson leads Arkansas at the plate this season with a .347 average, followed by Miranda Dixon at .331. Dixon leads the Lady’Backs with 12 doubles and 40 RBIs, while also hitting 11 home runs. Sandra Smith leads Arkansas with a team-best 14 home runs. Not a prolific base stealing team, Jessica Bachkora leads the Lady’Backs with 14 stolen bases in 17 attempts, the only Arkansas player with more than six stolen bases.

As a team, the Tigers are hitting .283 for the season, the fifth best average in the conference. LSU has recorded 58 doubles with seven triples and 43 home runs. The Tigers are averaging just over five runs a game, having scored 250 runs this season. LSU also ranks fourth in the conference with 89 stolen bases, having been thrown out only 11 times all season.

Dani Hofer leads LSU in the circle with an 18-7 record and a 1.90 earned run average.  The junior has recorded 210 strikeouts in 29 appearances to average over 10 strikeouts per seven innings, which ranks 11th nationally this season. The hurler has been battling a wrist injury that has limited her effectiveness over the last month. After resting for the week, her status remains day-to-day.

Arkansas has utilized five pitchers this season, but has mainly relied upon two starters. Katy Henry leads the Lady’Backs with 16 wins as part of a 16-10 record. In addition, she has a 2.49 earned run average with a team-leading 164 strikeouts in 37 appearances. Miranda Dixon is 12-10 on the year with a team-best 1.74 earned run average and 11 strikeouts in 28 appearances.

Last season, the Tigers swept the season series with Arkansas, winning 5-0, 7-0, and 3-1 in Fayetteville. LSU leads the all-time series against the Lady’Backs, 34-7, having lost only one series to Arkansas in 11 previous years, with an overall record of 14-3 in Baton Rouge. The Tigers have now won five straight and seven of its last eight games against the Lady’Backs.

LSU will then return home to host the 2008 SEC Softball Tournament from May 8-10. The Tournament will feature the top eight teams in the league in a single-elimination format that will determine who receives the conference’s automatic bid to the NCAA Tournament. LSU has won five of the previous 11 tournament titles, the most of any school in the league, and the Tigers are the defending tournament champion, defeating Florida, 1-0 in nine innings in Auburn last season.