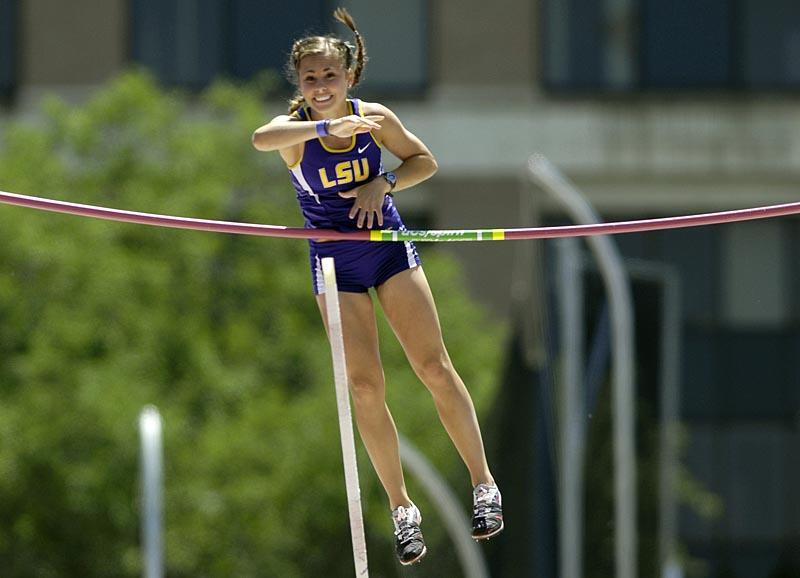 PHILADELPHIA — Sophomore Katelyn Rodrigue has enjoyed her share of history-making moments in two years at LSU, and Thursday she accomplished what no Lady Tiger has ever done by breaking her own school record to win the pole vault at the prestigious Penn Relays.

Rodrigue, who entered the meet with a seasonal best clearance of 13 feet, 2 ? inches, went up and over the bar at 13-7 ? to set a new overall personal best and raise the previous outdoor school record of 13-3 ? she set at the NCAA Mideast Regional Championships a year ago.

This marks the second straight season that Rodrigue has competed at the Penn Relays after taking third place in the championship section a year ago with a then school record clearance of 13-1 ?.

After improving her seasonal best to 13-5 ? on her second attempt, Rodrigue looked effortless in clearing 13-7 ? on her first attempt at that height. Despite going out with the bar resting at 13-9 ?, Rodrigue finished the competition ranked No. 9 on the NCAA performance list for 2008.

“It feels good to win at a meet like this, but I feel a lot better that I was able to PR,” Rodrigue said. “I haven’t been jumping very well outdoors so far. I’ve been clearing bars, but my technique hasn’t been where it needs to be to go higher. I was able to stay consistent on my run, which gave me the chance to work more on my plant and swing.

“I’ve got a lot of confidence going into conference. I went out on the biggest pole I’ve ever used, so I should be jumping even higher once I get used to that. I’ve got three weeks to get ready.”

The top-ranked Lady Tigers got off to a fast start in the 114th running of the nation’s premier relay carnival as they qualified both their 4×100 and 4×400-meter relay teams into Championship of America finals during Thursday’s action at Franklin Field.

The Lady Tigers will compete for their first relay title of the weekend on Friday after qualifying for the finals of the 4×100 with the second-fastest preliminary time at 43.54 seconds.

LSU has dominated the event since its first appearance in the Penn Relays as the Lady Tigers have won a total of 11 Championship of America relay titles in the 4×100. The foursome of Brooklynn Morris, Samantha Henry, Juanita Broaddus and Kelly Baptiste will look to make it a 12th title when they line up in the final on Friday at 11:55 a.m. CDT.

The Lady Tigers’ top-ranked 4×400-meter relay finished the day by advancing to Saturday’s final with the fourth-fastest time in the prelim round at 3 minutes, 34.13 seconds.

While the women have won a total of 25 Championship of America relay titles all-time at the Penn Relays, only two have come in the 4×400 relay as they are looking to win their first title in the event since 1993. LSU boasts the fastest time in the nation this season at 3:29.28.

“We didn’t have a lot happening on the track today, but I thought our relays ran well in the prelims,” said LSU head coach Dennis Shaver. “The Penn Relays is a great rehearsal for what we will experience in the championship meets when you’re trying to do just what you need to do to advance and then get ready to run well in the final. That’s just what we did today.”

Four other Lady Tigers competed in individual events during Thursday’s action as sophomore Kim Williams led the way with a fourth-place finish in the championship section of the women’s hammer throw with a regional qualifying mark of 184-4.

Williams has already qualified to compete in the 2008 NCAA Mideast Regional Championships later this sping as she just missed equaling her seasonal best and personal best mark of 184-5.

The action continues for LSU on Friday with the field events set to begin at 9 a.m. followed by the first events on the track at 11:25 a.m. Four other Championship of America relay titles will be on the line during Friday’s action, including the men’s sprint medley and distance medley relays and the women’s sprint medley and shuttle hurdle relays.