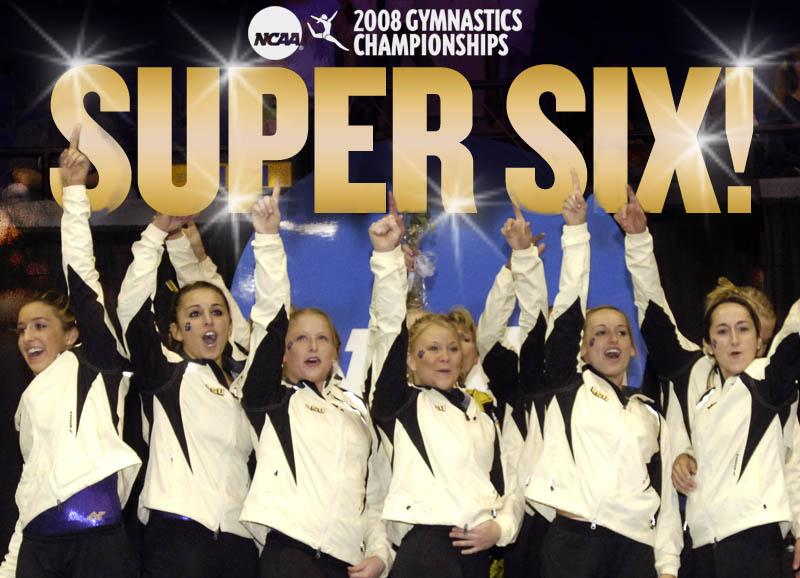 ATHENS, Ga. — The LSU gymnastics team advanced to the NCAA Super Six for the first time in school history by compiling a third-place score of 196.575 Thursday afternoon in session one of the NCAA Championships at the Stegeman Coliseum.

The Southeastern Conference owned the first session as Florida (196.900) and Alabama (196.650) also advanced to the Super Six. Three-time defending national champion Georgia, Utah and Stanford advanced from the second session.  The Super Six will take place Friday at 5 p.m. CT.

In the previous 19 trips the Tigers have made it to the NCAA Championships, they have never advanced to the Super Six. The Tigers best finish came in 1988 when they finished fourth in Salt Lake City. This was before the Super Six format was introduced.

“It was our determination and desire that got us to the Super Six,” LSU head coach D-D Breaux said. “It’s about knowing every time you are in the weight room you are working out for a reason. It’s about every time you put something extra in your routine, that you may not be comfortable with at first, you work at it until you are comfortable.”

Hubbard earned All-America honors with her third place score of 9.925 on bars.

Jackson, Clare-Kearney and Hubbard will each participate in the individual event finals on Saturday beginning at 5 p.m.

“I have to applaud our upperclassman for continuing to push the freshman and sophomores,” Breaux commented. “They never let up and helped our team rise to the occasion.”

On floor, the Tigers were led by first-team All-SEC selections Clare-Kearney and Jackson who each posted a 9.90 to tie for fourth overall. Kristi Esposito and Samantha Engle each posted a solid 9.825 to round out LSU’s top four marks.

In the third rotation, LSU was on vault where Jackson continued her strong outing by scoring 9.875 to tie for third.

Each team had completed two events at the end of the third rotation and the Tigers were in the lead with a score of 98.300. Fellow SEC squads Florida (98.275) and Alabama (98.150) trailed LSU at the midway point.

The Tigers carried their momentum into the fifth rotation on bars by posting a solid 49.450. Clare-Kearney tied for first among all competitors by scoring a 9.950. Hubbard earned her All-American accolade by tying for third with a score 9.925.

LSU Head Coach D-D Breaux
“This was really gratifying. I think it’s a testament to the strength of our conference and how hard our team works. We finished on beam with a young team and I thought they showed a lot of character. I am really excited to be included with such an elite group of athletes this week.”

“We need to be more consistent and compete with reckless abandon (on Friday). The hart part for us was getting here and getting that gorilla off of our backs. We need to have more fun tomorrow than we did today.”

LSU Sophomore Susan Jackson
“We are so excited for D-D, who has been coaching for 30 years and never gotten to the Super Six. I am excited to be part of the team that got her there. I think we will go to the cold tub, have fun at dinner with the girls and treat this like any other night before a meet.”

Florida Head Coach Rhonda Faehn
“This afternoon was very competitive. As a team, we did a very good job. They all hung in there together. There are a few areas we want to work on for tomorrow. We missed quite a few landings on vault and on the beam today. We did a tremendous job on floor. We’ll need to make those adjustments for us to be successful tomorrow.”

“We started out a little bit shaky (on beam) but we didn’t let that affect us. They really dug deeper. Melanie, who went third, pulled us out and did a tremendous job. She brought the focus and intensity to the rest of the lineup. That’s something we’ve really worked hard on, not letting little things that you can’t control affect you.”

Florida Sophomore Melanie Sinclair
“It’s exciting (to be competing in the all-around). I haven’t been on top in all around in a long time. To be able to compete in all events this year is an incredible feeling. It’s great to be healthy enough to get out there and compete in all four events.”

Alabama Head Coach Sarah Patterson
“Obviously we are thrilled to be back on this podium as part of Super Six.  I am so pleased with our ladies. We started out tough on beam and had to come back with a special effort.  I just knew we’d come through together.  Sometimes the best things happen when you have mistakes. This is a special group of young ladies. We are thrilled to represent our university and this great conference.”

“From some of the scores at regional, I think the scoring was a little low today. The closeness of scores was the same way we had at the SEC meet. If we’re not changing routines, hopefully scores will remain consistent. Tomorrow we’ll start all over. It’s a whole new ballgame.”

“Our second bar position has been our most difficult all season. I had no doubt the next three were going to make their routines. Kelsey Price was a star today. There was no way she was coming off those bars.”

Alabama Senior Kaitlin White
“We knew we didn’t perform our best on beam, but we just stuck together and had great teamwork. We’re very excited to be back.”