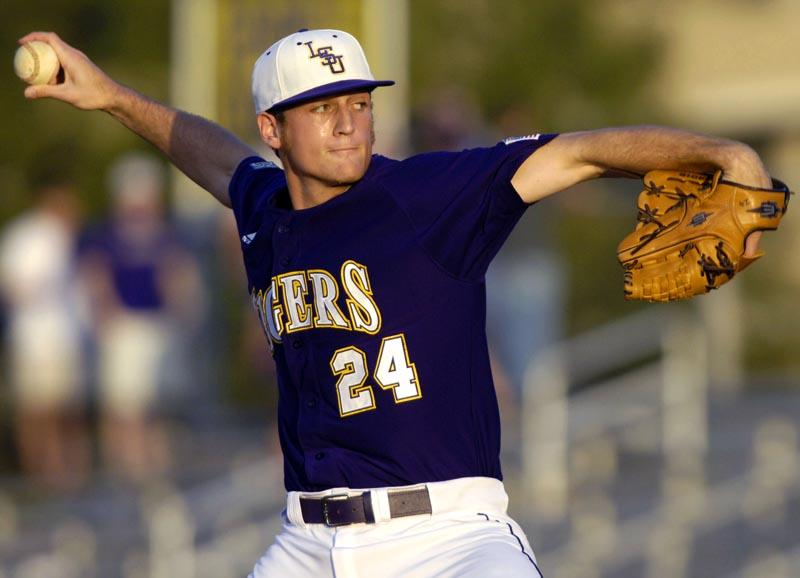 BATON ROUGE — Three LSU pitchers combined to allow only one McNeese State hitter to reach base Wednesday night while Blake Dean and Matt Clark combined for three homers in the Tigers’ 6-0 victory over the Cowboys in Alex Box Stadium.

Daniel Bradshaw (2-5), Austin Ross and Anthony Ranaudo pitched flawlessly for the Tigers (25-16-1), as they combined for no walks and nine strikeouts. The one-hitter was the first for LSU since Patrick Coogan fired a one-hitter against Ole Miss on April 18, 1997.

“We put a lot of pressure on McNeese,” said LSU coach Paul Mainieri. “We forced them to hit a lot of fly balls. I thought Daniel Bradshaw was outstanding. It was really important for him to get out there in a situation where he didn’t have to feel that every pitch meant the game. He showed what he is capable of doing.”

Bradshaw got the start for LSU, pitching six solid innings. He retired the first 12 batters he faced, striking out six and giving up no runs. He was credited with his second victory of the season.

Jonathan Conrad took the mound for McNeese and gave up only two hits through the first three innings. However, Clark and Dean bested the Sulphur, La. native, blasting a two-run home run and solo shot respectively. Jared Mitchell hit an RBI single off of Conrad in the seventh for the Tigers’ fourth run.

The Tigers nearly put a run on the board in the bottom of the first. Dean reached base with two outs in the first after slamming a double to the left field wall. Derek Helenihi hit a shallow fly to left that would have scored Dean, but the ball was caught by a diving Sam Merrill of McNeese to end the inning.

Bradshaw made quick work of the Cowboys in the second, retiring the side in order. However, Conrad matched Bradshaw’s feat in the bottom of the same inning.

Bradshaw continued to dazzle in the top of the third, throwing an array of fastballs and buckling curveballs to once again retire the side.

Leon Landry ripped a single through the right side of the infield to open the bottom of the third. He followed his hit, only the second of the game for the Tigers, with his ninth stolen base of the season. The freshman from Baker, La. reached third on a wild pitch. Jared Mitchell walked and then stole second to give the Tigers two runners in scoring position with no outs. However, Ryan Schimpf flied out to left field, Michael Hollander popped up to the shortstop and Dean grounded out to the pitcher to leave Landry and Mitchell stranded on the base paths.

Bradshaw retired his 12th straight batter to get out of the top of the fourth when Shon Landry grounded out to shortstop.

LSU catcher Micah Gibbs nailed a line drive to right field with one out in the fourth. Clark followed Gibbs’ single with his team-leading 14th home run of the season, giving the Tigers a 2-0 lead.

Taylor Freeman was the only Cowboy to reach base after hitting a line drive to right field just over the top of Clark’s glove in the top of the fifth inning.

Dean added to the lead in the sixth with his solo home run. His shot to right center field was his 10th of the season.

Bradshaw was relieved in the top of the seventh by Ross, who retired the Cowboys in order.

LSU shortstop DJ LeMahieu reached base for the first time in the seventh when he singled through the left side of the infield. He stole second for his ninth steal of the year, and advanced to third on a throwing error by McNeese catcher Tony Coniglio. Mitchell then delivered an RBI single.

Ranaudo came on to pitch in the top of the eighth, making only his second appearance of the season. He fired two perfect innings, striking out two batters.

“Bradshaw, Ross and Ranaudo are the future of LSU pitching,” Mainieri said. “They dominated the game. I’m really happy about that.”

Clark added another two-run blast in the eighth off relief pitcher Justin LeBleu to give the Tigers their final two runs of the game.

“It’s good to see Matt (Clark) hit a couple of home runs to bring his confidence back,” Mainieri added.

Conrad (1-6) was charged with the loss, pitching seven innings and giving up four runs.