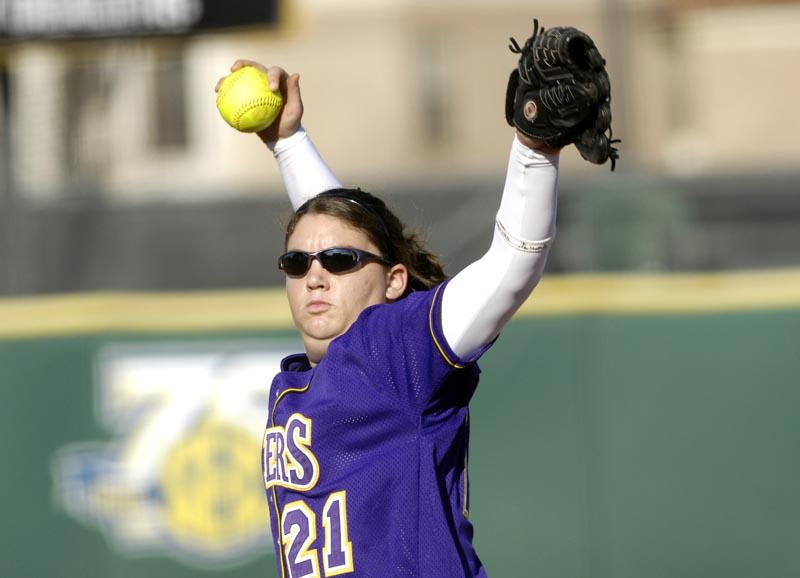 MONROE, La. — In front of the largest crowd in ULM Softball Complex history, the 15th-ranked LSU softball team run-ruled Louisiana-Monroe, 11-0, in five innings behind a one-hitter by freshman Casey Faile on Wednesday evening.

With an attendance of 608, the Warhawks nearly doubled their previous stadium attendance record, which included many LSU fans there to cheer on the Tigers. LSU improved to 35-14 on the season with the win, while the loss dropped UL-Monroe to 17-31. The Tigers completed the season sweep of ULM after taking a 9-2 win in Baton Rouge earlier this year.

“It’s always fun to see so much purple and gold on the road in the state of Louisiana coming out to support the Tigers,” said LSU head coach Yvette Girouard.

Faile started and earned the complete-game shutout to improve to 3-1 on the year. She gave up only one single with a lone walk with four strikeouts in five innings. After giving up a leadoff walk to start the game, Faile retired the next seven batters in order before the lone single by Calli Baker broke up the no-hitter. Faile came back to retire the final seven batters in order to end the game.

“It was a great performance by Casey Faile tonight,” said Girouard. “She had the Warhawks completely off balance. She only gave up that one hit. The best thing about it was that she was always working ahead which always makes it easier for the pitchers and the defense.”

Three Tigers recorded multiple-hit games, with Quinlan Duhon going 2-for-2 and Rachel Mitchell and Erika Sluss each going 2-for-3. Mitchell led the way with a home run and three RBIs, while Shannon Stein and Ashley Applegate each had two RBIs.

“We had several players who had great nights at the plate,” said Girouard. “Rachel Mitchell is hitting the ball about as hard as you can hit it.”

In the top of the first inning, LSU wasted no time in getting on the board as Mitchell recorded her eighth home run of the season, a solo shot to right field. The Tigers erupted for four more runs in the top of the second, all with two outs. Jessica Mouse hit a single up the middle and advanced to second on a wild pitch. A single down the left field line by Applegate scored Mouse as Applegate advanced to second on the play.

On a bloop single just over the head of the shortstop, Dee Dee Henderson reached and Applegate advanced to third. Henderson became just the second player in LSU history to record 30 stolen bases in a single season with a swipe of second. A double to right field by Stein scored both Applegate and Henderson. Stein then scored on a double to left center by Mitchell, but the inning was then ended as Mitchell was caught stealing third.

In the top of the third, the Tigers added one more run. Quinlan Duhon led off with a single up the middle. She moved to second on a ground out by Killian Roessner. On a single to left field by Sluss, Duhon was thrown out trying to score. Duhon was then ejected from the game on the play after running into the catcher, who was playing several feet up the base line.

With Sluss on second after the play, she came around to score as Casey Faile reached on a two-base throwing error by the Warhawk shortstop.

After failing to score for the first time in the top of the fourth, LSU responded with five more runs in the top of the fifth. With one out, the Tigers posted three-straight hits including a single by Jazz Jackson, a double off the right field wall by Killian Roessner and an RBI single by Sluss. Faile was then hit by a pitch to load the bases before Mouse was hit by a pitch to score Roessner.

On a fielder’s choice by Ashley Applegate, the second baseman made a diving attempt on a ball, but came up short and overthrew second as the bases remained loaded and Sluss scored. Tiffany Shaw was then hit by a pitch to score Faile from third. With two outs, Jackson drew a walk to push home the fifth run of the inning.

Heather Fritz started and took the loss for UL-Monroe, falling to 3-4 on the season. She allowed five runs on seven hits with three strikeouts in an inning and two-thirds. Lindsay Rittenhouse came on in the second and gave up six runs, five earned, on five hits in two and two-thirds. Shanna Swillie closed out the final two-thirds by allowing a lone walk.

The Tigers will return home this weekend for the regular season home finale. LSU will host Arkansas in a three-game SEC series beginning with a doubleheader on Saturday at 1 p.m. and concluding with a single game on Sunday at 1 p.m. It is also “Senior Weekend” as the Tigers honor the seven-member senior class.