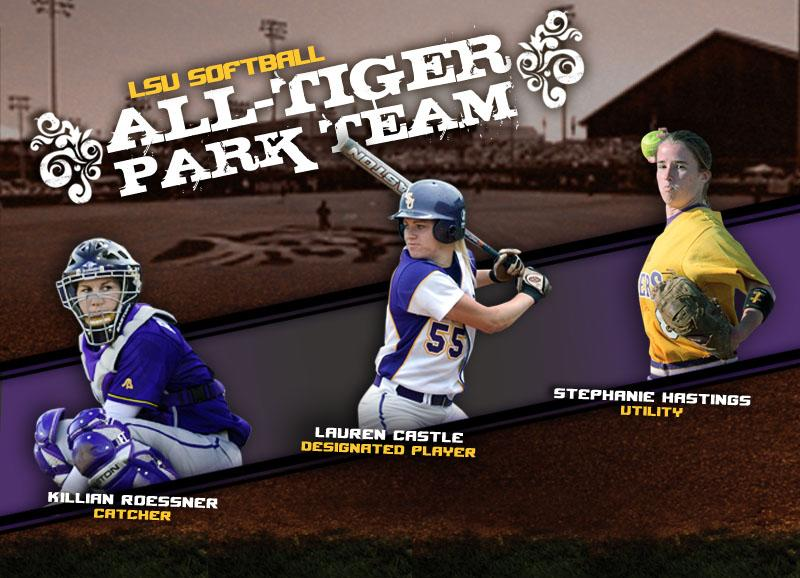 BATON ROUGE — In celebration of the final season of Tiger Park, Killian Roessner, Lauren Castle and Stephanie Hastings were named to the All-Tiger Park team.

The LSU softball team will announce 12 members of the All-Tiger Park team over the final four weeks of the home regular season. This is the third of the four selections. The final honorees, the three pitchers, will be announced on Friday, April 25, prior to the start of LSU’s final regular season home games in Tiger Park.

The current Tiger catcher, Roessner was the first LSU player to ever earn 2007 Diamond Sports National Catcher of the Year honors and the fourth Tiger to become a first-team All-America selection. The Manasquan, N.J., native is also tied for the second highest fielding percentage in LSU history.  Over the course of five games beginning against Louisiana Tech on Feb. 25, 2007, and concluding against Washington on March 3, 2007, Roessner recorded the third most hits in consecutive at-bats in NCAA history with 10 hits in 10 consecutive at-bats.

A three-year letterwinner after transferring from UL-Lafayette, Castle earned Easton All-America honors in 2004, 2005, and 2006. A two-time NFCA All-South Region selection, the Lafayette native led the Tigers in walks as a senior with the second most in school history and only one shy of the school record. She concluded her career ranked in the top 10 in LSU history in batting average, on base percentage, walks, hits, triples and run scored.

A four-year letterwinner, Hastings earned first-team All-America honors at second base as a junior and was a three-time first-team All-SEC selection in the infield and as a utility player. In the SEC Tournament, the Houston native was an all-tournament selection at second base in 2000 and at shortstop in 2001. Having played at several positions throughout her career, she had one of the top five fielding percentage in SEC history at catcher, second base and at shortstop.