No. 15 Softball Travels to Face UL-Monroe 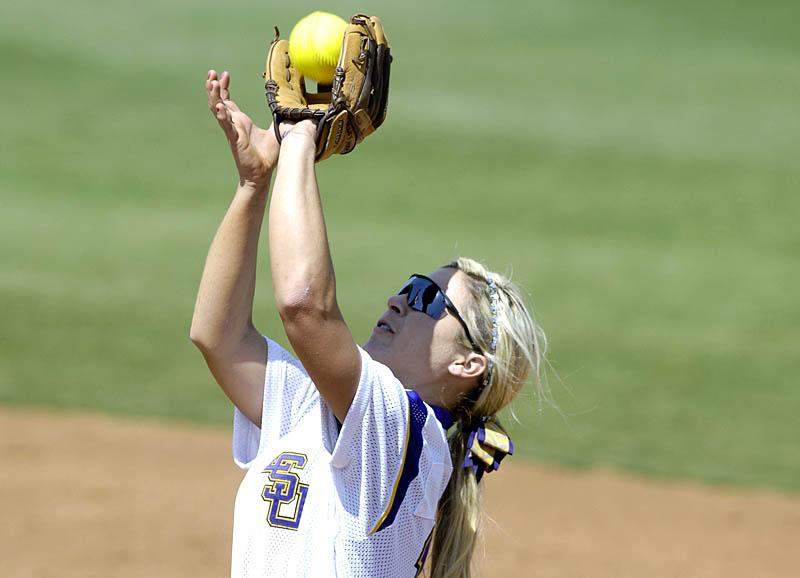 BATON ROUGE ? The LSU softball team slipped in one of the polls this week, coming in at No. 15 in the NFCA/USA Today poll while remaining at No. 16 in the ESPN/USA Softball poll, as the Tigers travel to in-state rival Louisiana-Monroe on Wednesday at 6 p.m. at the ULM Softball Complex.

Last week, the Tigers (34-14) earned a run-rule win over Nicholls State, 10-2, in six innings at home. LSU then traveled for a three-game Southeastern Conference series at top 10-ranked Tennessee. After being run-ruled, 8-0, in five innings in the first game, the Tigers almost returned the favor in game two, winning 8-2. In the rubber match on Sunday, LSU held a 4-3 lead with two outs in the bottom of the seventh, but the Lady Vols came through with a two-run walk-off double to earn the series win, 5-4.

“The team was totally not in the game in the first game against Tennessee,” said LSU head coach Yvette Girouard. “The next two games we rebounded and I was extremely happy to see the fight in the team. On Sunday we had the game won basically until the last pitch.

“We’ve had a few gut-checks during the year and some real punches in the stomach,” said Girouard. “We had Alabama beat three times in game one and they came back to beat us in what their coach said was the greatest game in Alabama history on their field. And considering what that program has done, that is quite a statement. Now, we just have to keep persevering and remain positive. If you get hot, then things can turn around.”

UL-Monroe comes into Wednesday’s game with a record of 17-30. The Warhawks were swept at home by Florida Atlantic last weekend, but ULM has won five of its last nine games, including a three-game sweep of Western Kentucky.

In the first meeting, the Tigers used pitching by committee for the game, getting action from all four pitchers, while all 16 players were on the field at one point during the game. Shannon Stein led LSU at the plate with a 3-for-4 performance and two runs scored. Rachel Mitchell went 2-for-4 with a home run, two RBIs and two runs scored. Ashley Applegate was 1-for-3 with two RBIs and Tayl’r Hollis went 1-for-1 with a home run, three RBIs and a run scored.

LSU scored five runs in the first, including a three-run home run by Hollis and a two-RBI single by Applegate. The Tigers added one more run in the second, before ULM cut the lead to five with a run in the top of the third. The Warhawks got to within four in the top of the sixth. A two-run home run by Mitchell in the bottom half of the inning, along with an unearned run, closed out the game.

Mitchell leads LSU at the plate this season with a .349 average and 32 runs scored. The sophomore is also tied for the team lead with 11 doubles and ranks second with 37 RBIs and third with seven home runs. Killian Roessner leads the Tigers with nine home runs and 38 RBIs, while Dee Dee Henderson has tied her career high with a team-best 29 stolen bases.

“Dani Hofer will be on the shelf for a little while,” said Girouard. “Her wrist is very inflamed. The good news is that there are no fractures, but we have no identified the problem and just have to rest her for a little while and hopefully she will be available for the stretch run.”

Brianna Love continues to lead UL-Monroe at the plate for the year with a .300 batting average, while boasting a team-best nine home runs, 24 RBIs, and 25 runs scored. As a team, the Warhawks are hitting at a .228 clip with 37 doubles and 17 home runs. ULM has stolen 27 bases, but also been caught stealing on 14 occasions. Louisiana-Monroe has committed 59 errors in about 1400 chances for a .955 fielding percentage.

The Tigers will return home this weekend for the regular season home finale. LSU will host Arkansas in a three-game SEC series beginning with a doubleheader on Saturday at 1 p.m. and concluding with a single game on Sunday at 1 p.m. It is also “Senior Weekend” as the Tigers honor the seven-member senior class.