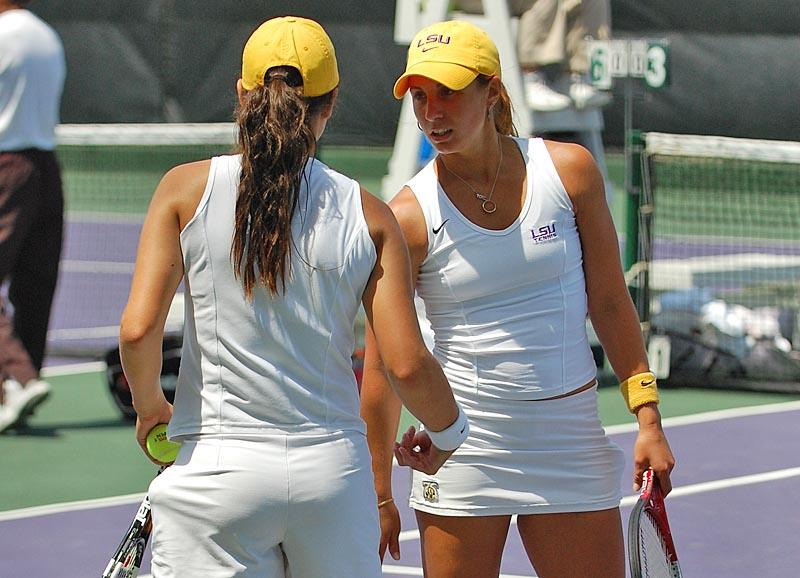 Falcon checked in at No. 15 in singles, falling three spots from No. 12. Last week at the Southeastern Conference tournament in Auburn, Ala., Falcon finished 1-1 in singles, including clinching LSU’s match against Alabama in the first round. Falcon knocked off Alabama’s Tiffany Welcher, 7-6(2), 7-5, which marked the second time Falcon defeated Welcher this season.

In the quarterfinal round of the tournament, Falcon squared off against Arkansas’ Aurelija Miseviciute for the second time in less than a week. Miseviciute, who is ranked No. 1 again this week, beat Falcon, 6-4, 6-1.

Despite going 1-0 in the tournament, Falcon and Hedberg dropped two spots to No. 24 in the doubles rankings. The Lady Tiger tandem was first to finish against Alabama by posting an 8-4 win over Paulina Bigos and Andrea Brenes on court 1.

Against Arkansas’ 30th-ranked Miseviciute and Ela Kaluder, LSU’s duo trailed 5-4 when the match was called because Arkansas had clinched the doubles point.

The Lady Tigers are idle this week as they prepare for the NCAA Tournament selection announcements that will air between 1 and 1:30 p.m. CT, April 29, on ESPNews.

The ITA will release team, singles and doubles rankings on April 28, one final time before the NCAA Tournament begins May 9.