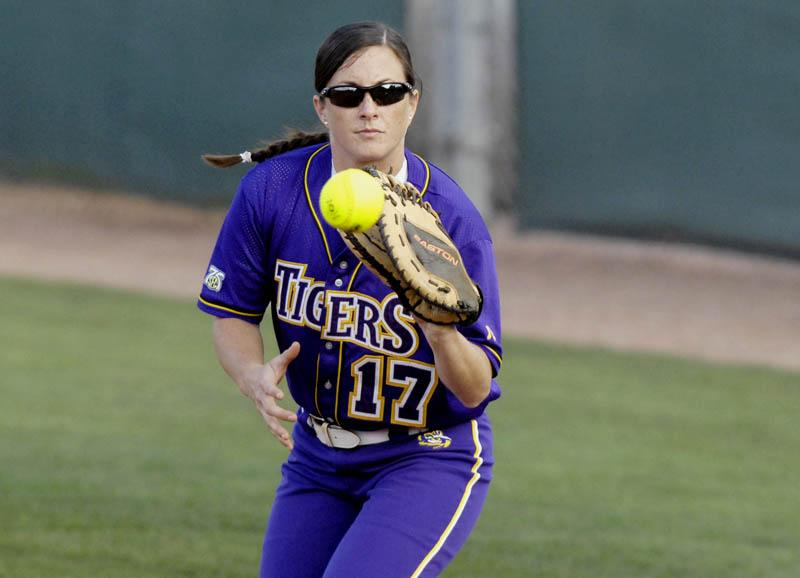 KNOXVILLE, Tenn. — Tennessee’s Shannon Doepking hit a two-run walk-off double with two outs in the bottom of the seventh to give the ninth-ranked Lady Vols the 5-4 win over No. 14 LSU on Sunday afternoon at Sherri Parker Lee Stadium.

With the loss, the Tigers dropped to 34-14 overall and 12-10 in Southeastern Conference play. Tennessee improved to 43-9 on the season and 13-8 in league play. The Lady Vols now sit a game and a half ahead of LSU for third in the conference standings.

In the bottom of the seventh, the Tigers needed only one out to earn the series win, but Doepking got her first hit of the game to give Tennessee the win. Two walks led directly to the winning run as Kenora Posey drew a one-out walk and Tonya Callahan drew a two-out intentional walk. Doepking, who was 0-for-2 on the day and was the final out in two previous innings, then hit a double off the wall in right field that scored Posey before pinch runner Kelly Grieve slid in safe ahead of the tag at the plate.

“It was a heartbreaking game after the Tigers fought so valiantly,” said LSU head coach Yvette Girouard. “We were our own worst enemy in the last couple of innings. Obviously, there was a lot of fight in this team this weekend unlike some previous weekends, so I’m really proud of that. We just have to rebound and get ready for next weekend.”

Tiffany Garcia took the loss in relief for the Tigers to fall to 2-2 on the season. She allowed two runs on two hits with five walks and two strikeouts in two and two-thirds innings. Cody Trahan started and allowed three runs, two earned, on two hits with two walks and a strikeout in the first four innings.

Despite out hitting Tennessee, 8-4, LSU stranded six on base, including three in scoring position in the loss. After recording only one hit against Lady Vol starter Ashton Ward on Saturday, the Tigers came back to hit three home runs off the hurler in the finale. Unfortunately, two of the three homers were solo shots.

Erika Sluss put the Tigers on the board in the top of the second inning. With two outs, Sluss drove a full-count pitch over the wall in deep center field. It marked the eighth home run of the season for the senior first baseman and the sixth in her last 17 games.

In the top of the third, Rachel Mitchell stretched the lead to 3-0 on a two-run home run. With one out, Shannon Stein singled off Ward in the circle. Mitchell then hit her second home run of the weekend, a line shot over the right field fence, after coming through with a grand slam on Saturday.

In the bottom of the fifth, Tennessee broke up the no-hitter and tied the game up with a three-run home run. Tiffany Huff reached on an error to lead off the inning. A double to center field by Jennifer Lapicki pushed Huff to third. Erinn Webb then hit a home run over the center field fence to even the game at three each.

Garcia then came on in relief of Trahan in the circle and walked the first two batters. The pair moved to second and third on a sacrifice bunt by Kenora Posey. On an infield ground out by Danielle Pieroni, the runners were unable to advance. With two outs, Tonya Callahan was intentionally walked to load the bases. Garcia then struck out Doepking to end the inning.

Despite injuring her shoulder earlier in the same at-bat, Quinlan Duhon gave LSU the lead once again with a solo home run in the top of the sixth. The senior outfielder re-injured her shoulder on a check swing before coming back to drive a 2-2 pitch over the fence in left field to put the Tigers on top, 4-3.

In the bottom of the seventh, Tennessee put the tying run in scoring position and the go-ahead run on first. With one out, Posey reached on a walk. She moved to second on a ground out by Chanda Mogan. An intentional walk to Callahan put runners on first and second. Doepking then doubled off of the fence in right field, scoring Posey and pinch runner Grieve to end the game.

Ward earned the complete-game win to improve to 24-3 on the season. She allowed four runs, all earned, on eight hits with a walk and five strikeouts.