Barsamian Tied for Second After Round 2 at SEC's 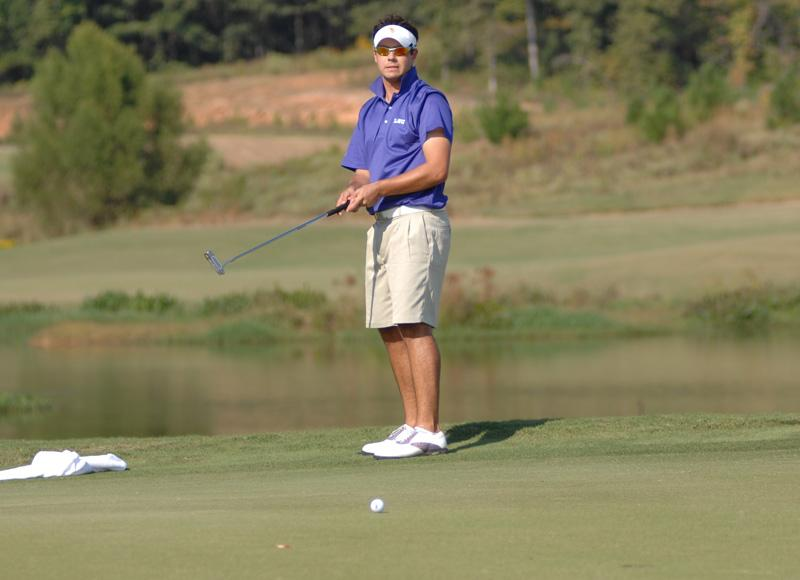 ST. SIMONS ISLAND, Ga. — LSU junior Jarrod Barsamian has yet to earn a Top 10 finish during his collegiate, but he has put himself in the thick of the title chase at the 2008 SEC Men’s Golf Championships after firing a 2-under 70 in Saturday’s second round.

Barsamian filled his scorecard with red numbers as he carded six birdies on the day to go along with four bogeys for a team low of 70 at Frederica Golf Club.

He finds himself just one shot out of the lead and in a tie for second place with Tennessee’s David Holmes with a two-day total of 2-under 142. First-round leader Joseph Sykora of Alabama finished with a 73 and holds a one-shot lead at 3-under 141 heading into Sunday’s final round.

After making back-to-back birdies on the par-three fifth and the par-four sixth holes to drop to 1-under par on his round, Barsamian made the turn at 1-over following two straight bogeys on the par-three eighth and the par-four ninth. He then caught fire with four birdies and just one bogey to finish his back nine at 3-under for an impressive 18-hole score 2-under 70.

Not since LSU legend David Toms won medalist honors as a sophomore in 1987 has a Tiger held the title of individual champion at the SEC Championships, but that’s exactly what Barsamian has the opportunity to accomplish when he tees off Sunday at 7:40 a.m. CDT.

“Jarrod has played well these last two rounds, but he needs to just focus on doing the things he’s been doing that have gotten him to this point,” said LSU head coach Chuck Winstead. “He knows that. These guys have heard me say it many times that you should only concern yourself with the things you can control, and that’s taking it one shot at a time.”

Despite Barsamian’s ascent up the leaderboard, the Tigers dropped four spots in the standings as they currently sit in eighth place at 13-over 589 following a team total of 9-over 297 on Saturday.

Sophomore Bryant Lach and freshman Clayton Rotz recorded matching rounds of 7-over 79 to count as the Tigers’ fourth scorer on the afternoon. Rotz is currently in a tie for 49th at 9-over 153, while Lach is one shot back in a tie for 53rd at 10-over 154.

“We can’t count 79s in a round and be the team that we’re trying to become,” Winstead said. “We’re looking forward to tomorrow and having the chance to go out and play well.”

Alabama’s five-stroke lead entering the second round was cut to three by the end of the day as the top-ranked Crimson Tide lead the fourth-ranked Georgia Bulldogs with a 36-hole team score of 2-over 578. A win would give Alabama its first SEC championship since 1979. Florida will open the final round in third at 6-over 582, while Tennessee and South Carolina are tied at 7-over 583.

The Tigers are paired with Ole Miss and Vanderbilt in the final round and will tee off from the back nine beginning at 7 a.m. CDT. Live scoring for all of Sunday’s championship action will be provided by Golfstat and can be found online by logging on to www.golfstat.com.