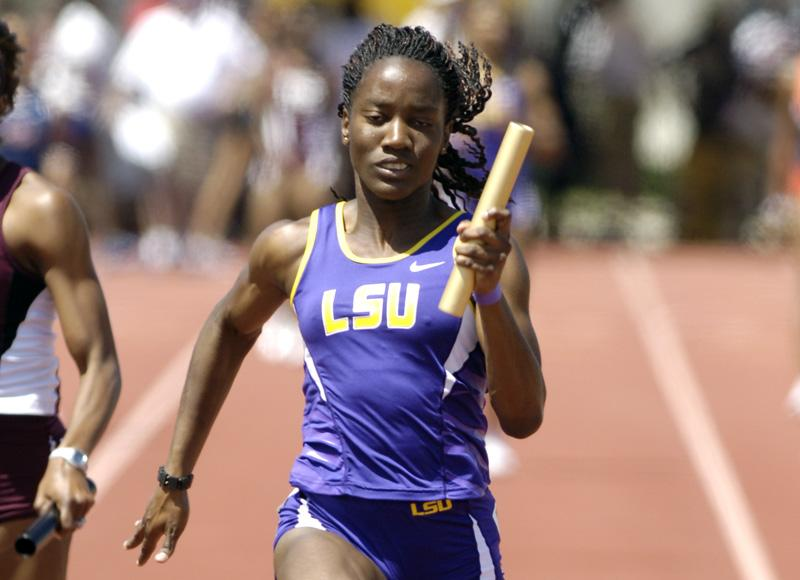 BATON ROUGE — No team in the history of women’s collegiate track and field has dominated the 4×100-meter relay like the Lady Tigers, and they showed why they are the team to beat once again after setting a new Bernie Moore Track Stadium record at the LSU Alumni Gold.

LSU’s sprint relay lined up as the second-ranked team in the NCAA as it entered Saturday’s action with a seasonal best of 43.10 seconds, but crossed the finish line as the new NCAA leader with the second-fastest time in the world this season at 42.84.

With the defending NCAA champions from Texas A&M lined up to the outside, the Lady Tigers beat the Aggies (43.38) to the tape and surpassed Texas A&M’s seasonal best of 42.97.

The Lady Tiger foursome of Brooklynn Morris, Samantha Henry, Juanita Broaddus and Kelly Baptiste erased the previous stadium record of 43.12 set by the South Carolina Gamecocks at the 2002 NCAA Outdoor Championships when the meet was last held in Baton Rouge.

The LSU women have dominated the 4×100 relay since winning their first NCAA title in the event in 1985 and are among the favorites to win their NCAA leading 13th national title all-time.

“It was obvious by their performance that they were ready to run the relay,” said LSU head coach Dennis Shaver. “Not only did they feel it was important to come out and run fast, but it was important for them to come out and win. We need to continue to build on it. There’s still a lot of room for improvement, and we’re going to try to run even faster.”

Despite running without freshman Gabriel Mvumvure on the third leg, the Tigers followed by winning the men’s 4×100-meter relay over Texas A&M with its second-fastest time of the season at 39.17. The Tigers are the NCAA leaders in the event with a seasonal best of 38.74, while the Aggies are the nation’s second-ranked team with a top time of 38.83.

LSU was able to win the event despite some shuffling to the lineup as the order of Ryan Fontenot, Richard Thompson, Armanti Hayes and Trindon Holliday held off the Aggies’ top squad.

In addition to having national leaders in both sprint relays, senior Elkana Kosgei and sophomore LaTavia Thomas established themselves among the favorites in the 800 meters this season as they walked away from Saturday’s competition as NCAA leaders in the event.

Thomas, who is the reigning NCAA indoor champion in the 800 meters, crossed the finish line with a new overall personal best and the fifth fastest time in Lady Tiger history at 2 minutes, 3.22 seconds. Kosgei followed minutes later with the sixth fastest time in school history as he won the event with an outdoor opener of 1:47.42.

After adding eight new qualifying marks at the LSU Alumni Gold, the Tigers and Lady Tigers have now combined for 57 individual qualifying marks and four qualified relay teams to compete in the regional meet that is scheduled for May 30-31 in Fayetteville, Ark.

“I thought LaTavia gave a really great effort today,” Shaver said. “The pace in the first half of the race was a little faster than we were hoping for, but she hung in there and gutted it out. You could tell that she was feeling it the last 100 meters or so, and she still found a way to finish strong.

“The objective for the men was to play it safe and each get a regional qualifying time. Those guys just push each other when they run that race. Elkana has shown that he’s very good when he’s on top of his game, and he’s somebody that makes it look effortless. Reuben and Jamaal have also shown that they can get it done. They did just what we wanted them to do today.”

The Tigers and Lady Tigers dominated the competition in their final home meet of the season and came away with a total of 13 event titles between them.

In addition to their wins in the 4×100-meter relays, the squads wrapped up the meet by sweeping 4×400 titles and it came down to LSU and Texas A&M once again. The women’s foursome of Morris, Nickiesha Wilson, Broaddus and Deonna Lawrence improved its NCAA leading time by a half second with a seasonal best 3:29.28.

The Tigers followed with a win of their own as they finished a mere .21 seconds ahead of the Aggies with their second-fastest time of the season at 3:04.76.

After setting a new personal best of 46.43 in the 400 meters earlier in the afternoon, sophomore Armanti Hayes was 15 meters behind Texas A&M’s Bryan Miller when he took the baton on the anchor. But Hayes ripped off a 45.14 split to catch Miller and give the Tigers the victory.

As its name might suggest, the LSU Alumni Gold drew a world-class field for Saturday’s competition as many former Tiger and Lady Tiger standouts opened their outdoor season as they will attempt to make their respective Olympic teams later this summer.

Lolo Jones, the 2008 World Indoor Champion in the 60-meter hurdles, set a new stadium record of her own by winning the 100 hurdles with a world-leading time of 12.72 in her first race of the outdoor season. Jones is looking to make the U.S. Olympic team for the first time, and her effort on Saturday meets the “A” qualifying standard for the U.S. Olympic Trials in June.

“This is always an exciting meet because of the quality field that we’re able to attract,” Shaver said. “Part of that are our former athletes that get a chance to come back and compete. We saw some of the best in the world today, and I’m thankful for their continued support of our program.”

The squads will wrap up the regular season next weekend as they make their annual trip to Philadelphia to compete in the 114th running of the Penn Relays at historic Franklin Field. They will then break for three weeks before kicking off the championship season May 15-18 with the 2008 SEC Outdoor Track and Field Championships in Auburn, Ala.