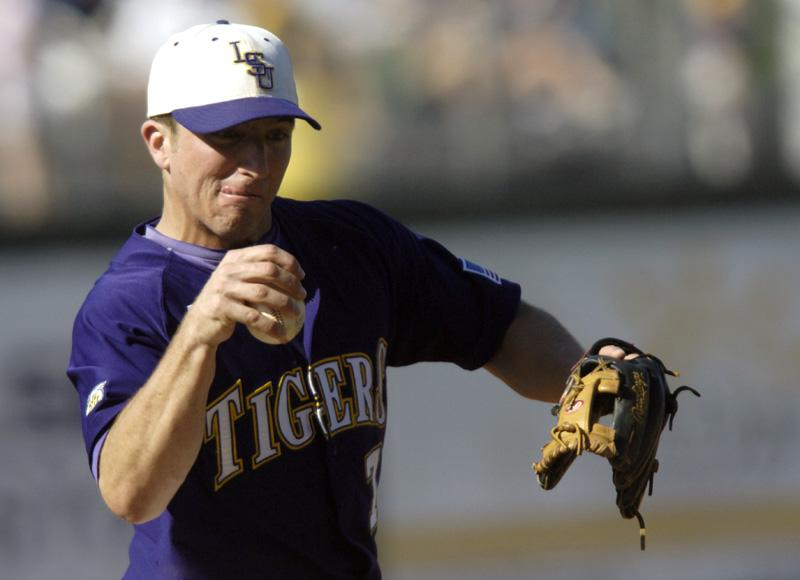 BATON ROUGE — Georgia third baseman Ryan Peisel delivered an RBI single in the ninth inning to break an 8-8 tie and give the seventh-ranked Bulldogs the victory over LSU, 9-8, Saturday in Alex Box Stadium.

The LSU-Georgia series concludes Sunday at noon CT. The contest will be televised by the Jumbo Sports Network, and it can be seen in Baton Rouge on Cox Cable Ch. 16.

In addition, the game can be heard on the LSU Sports Radio Network (WDGL 98.1 FM in Baton Rouge), and live video and audio may be accessed in the Geaux Zone at www.LSUSports.net.

LSU made a sensational comeback as the Tigers scored seven runs in the eighth inning to erase a seven-run deficit and tie the game, 8-8, but the Bulldogs would eventually prevail.

Peisel’s base hit gave the Bulldogs the go-ahead run in the ninth, and the Tigers were unable to answer in the bottom of the frame against Georgia’s Dean Weaver.

“We had some bad breaks in the top of the ninth inning,” said LSU coach Paul Mainieri, “and we couldn’t muster anything in the bottom of the ninth, so it was another tough loss.”

LSU left fielder Blake Dean enjoyed a three-hit day and reached base on four of his five plate appearances. Shortstop D.J. LeMahieu and catcher Micah Gibbs each went 2 -for- 4 with an RBI, and third baseman Michael Hollander and designated hitter Taylor Davis each collected RBI triples on the day.

Beckham put the Bulldogs on the scoreboard in the first inning with a two-out, solo home run just over the wall in left field.

The Bulldogs notched a run in the fourth and added three in the fifth. Beckham connected on a two-run shot, his second dinger of the day, and Georgia led 5-0.

After Georgia scored a run in the sixth, LSU tallied its first run in the bottom of the inning. With runners on second and third, LeMahieu ripped a base-hit up the middle to drive in a run. The Tigers cut the lead to 6-1.

The Bulldogs answered with two more runs in the seventh and eighth to take what seemed to be an insurmountable 8-1 lead, but the Tigers would strike back in the bottom of the eighth.

With the bases loaded, Sean Ochinko hit a sacrifice fly, delivering a pinch-hit RBI for the second straight day. After an RBI single from Gibbs, Davis followed with a two-run triple.

The Tigers then walked on consecutive plate appearances to load the bases, and Hollander cleared them with an opposite-field triple. The Tigers capped an amazing comeback to tie it at 8-8.

Unfortunately, it would not be enough as the Bulldogs came right back in the ninth to score the go-ahead run.

Centerfielder Matt Cerione reached on a one-out infield hit against Bradford, and he was sacrificed to second by second baseman Michael Demperio.

Peisel drove home Cerione with a single to give the Bulldogs a 9-8 lead. Weaver retired the Tigers in order in the bottom of the ninth to secure the win.

“I thought it was going to happen for us, where we rallied late and won a game,” Mainieri said. “It’s hard to explain sometimes. We just deserved a better fate there at the end.”