Trahan Helps No. 14 Softball Earn Split at No. 11 Tennessee 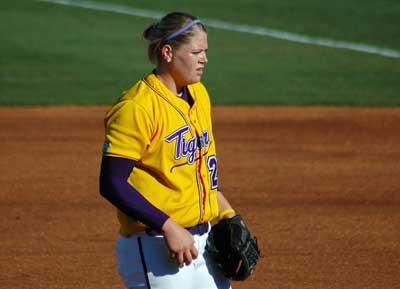 KNOXVILLE, Tenn. — After falling 8-0 in five innings in game one of the doubleheader, the 14th-ranked LSU softball team rebounded with an 8-2 win over No. 9 Tennessee in game two, which included a grand slam by Rachel Mitchell, on Saturday afternoon at Sherri Parker Lee Stadium.

With the split, the Tigers moved to 34-13 on the season and 11-9 in Southeastern Conference play. The Lady Vols moved to 42-9 overall and 12-8 in league play. LSU remains one game behind Tennessee in the overall league standings. The pair will meet in the rubber match on Sunday at noon CDT on Fox Sports in Baton Rouge on cable channel 38.

“It’s funny how the day works,” said LSU head coach Yvette Girouard. “We feel better about ourselves for getting a win in the second game. Now we can go home and regroup and figure out a way to win the series tomorrow. Hopefully we can capitalize on a little bit of momentum.

In the nightcap, the Tigers exploded for eight runs in the top of the third inning, courtesy of seven walks and a grand slam by Mitchell. Ashley Applegate and Dee Dee Henderson each walked twice and Applegate scored twice and Henderson scored once and was thrown out at the plate to end the inning. Shannon Stein also went 2-for-2 in game two with a sacrifice bunt and a pair of RBIs.

“Rachel Mitchell came through with a huge blow and it was great to see Shannon Stein start swinging the bat again,” said Girouard. “Hopefully we can put it all together when we come out here again tomorrow.”

Tonya Callahan almost single-handedly won the first game for Tennessee as she hit a pair of three-run home runs, accounting for six of the eight Lady Vols runs. Erinn Webb and Danielle Pieroni each recorded RBIs to account for the other two Tennessee runs. Henderson led off the game with a single, but, despite hitting the ball hard several times, could not come through with another hit in the contest.

Cody Trahan earned the complete-game win in game two to improve to 12-4 on the season. She allowed two runs on five hits with six walks and five strikeouts.

“I thought Cody did a great job coming in and getting the win in the second game,” said Girouard.

Megan Rhodes started and took the loss to fall to 19-6. She allowed five runs on four hits with five walks and two strikeouts. Danielle Pieroni threw a third of an inning in relief and gave up three runs without giving up a hit, but walking three.

Tennessee jumped out to the early lead in the bottom of the first inning of game two. Kenora Posey led off with a controversial walk on a full count illegal pitch. Posey moved to second on a sacrifice bunt by Lillian Hammond. An intentional walk to Callahan put runners on first and second. Posey then scored just under the tag of Killian Roessner at the plate for the first run of the game.

Applegate and Henderson drew walks to start the second inning for LSU before an infield single off the third baseman by Shannon Stein loaded the bases. Mitchell then came through with a grand slam, her second career grand slam and sixth home run of the year. After a single down the left field line by Roessner, Megan Rhodes was replaced in the circle by Danielle Pieroni.

Tiffany Shaw, pinch running for Roessner at first was called out for leaving early for the first out of the inning. Pieroni then walked the first three batters she faced to load the bases once again. With two outs after a 14-pitch pop out by Jessica Mouse, Rhodes once again returned to the circle. She then walked the next two batters to score a pair of runs. Stein then came through with a double to right center that scored two runs before Henderson was thrown out at the plate to end the inning with LSU ahead, 8-1.

In the bottom of the fifth, Tennessee got one run back. Kelly Grieve led off with a double down the left field line. Callahan was then intentionally walked to put runners on first and second. A deep fly ball to right field allowed Grieve to advance to third. Tiffany Huff then hit into an RBI fielder’s choice as Callahan was out going to second.

After giving up eight runs in the second, Tennessee settled down in the circle and did not give up a hit the rest of the way. The Tigers only gave up one hit in the final three innings, retiring six straight batters before walking two in the bottom of the seventh with two outs. Huff then struck out swinging to end the game.

In game one, Posey led off with a walk. A bunt single by Hammond put runners on first and second. Callahan then hit her first of two home runs in the contest to put Tennessee ahead, 3-0. Shannon Doepking then reached on a fielding error by Tayl’r Hollis at shortstop. She moved to second on a walk by Tiffany Huff. Jennifer Lapicki was hit by a pitch to load the bases before Doepking scored on the play that Webb grounded into a double play.

Tennessee added three more runs in the bottom of the second. With one out, Posey and Hammond recorded back-to-back singles. Callahan then came through with her second three-run shot of the game to stretch the lead to 7-0. The Lady Vols pulled ahead by eight in the bottom of the third. After a leadoff walk to Lapicki, she came around to score on a double to right center by Pieroni.