Men's Golf Gets in Clubhouse Early, Stands in Fourth at SEC's 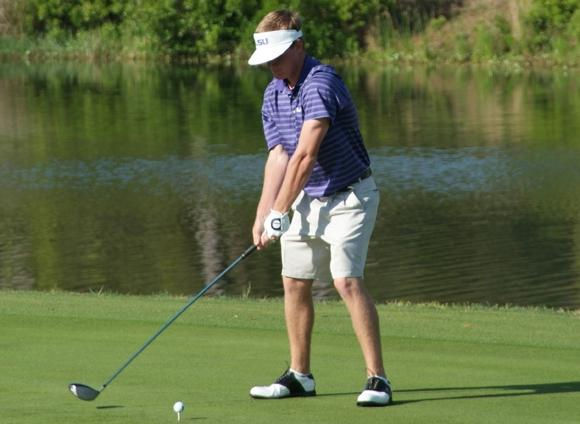 ST. SIMONS ISLAND, Ga. — The Tigers took advantage of the calm conditions early Friday morning at Frederica Golf Club and got off to a fast start by finishing the first round of the 2008 SEC Men’s Golf Championships alone in fourth place.

LSU posted an 18-hole score of 4-over par 292 to finish the day seven shots out of the lead and just two shots out of second place in the team standings.

The Tigers finished their round strong on the back nine as they played the final six holes at 2-under par after sitting at 6-over as a team through 12 holes. Freshman John Peterson led the way with a 1-under 71, while junior Jarrod Barsamian posted a solid round of his own at even-par 72.

“We were certainly fortunate to be in the first wave today because we played most of our round with little or no wind,” said LSU head coach Chuck Winstead. “That is an advantage we will not have tomorrow. We’re going to be teeing off mid morning, and we’re expecting it to be a much different golf course in the afternoon on the back nine.”

Both Peterson and Barsamian are making their first career appearance in the SEC Championships this weekend and showed no signs of inexperience with their play on Friday.

Peterson played a consistent round as he carded three birdies and two bogeys to finish the day in a tie for fourth place in the individual standings at 1-under par. After opening with two bogeys in his first five holes, Barsamian settled down and played the final 13 holes at 2-under before holing out on the 18th green in a tie for eighth place at even-par.

Freshman Clayton Rotz finished the day just outside the Top 20 of the leaderboard as he currently sits in a tie for 24th with a 2-over 74, while sophomore Bryant Lach posted a 3-over 75 to tie for 30th and freshman Andrew Loupe carded a 4-over 76 to tie for 39th heading into the second round.

Florida and Georgia posted matching 2-over par rounds of 290 to finish the opening round in a tie for second place, while LSU (292) and Mississippi State (293) round out the top five.

“The guys that are leading this tournament right now played the majority of their rounds in the wind. That just shows you the strength of those three teams,” Winstead said. “They are very experienced teams that have been at the top of this league for a while now and have had a lot of success at this championship in the past.”

The Tigers are paired with fifth-place Mississippi State and sixth-place South Carolina in the second round and will tee off Saturday beginning at 8:40 a.m. CDT. Live scoring of the second and third rounds can be found online by logging on to www.golfstat.com.