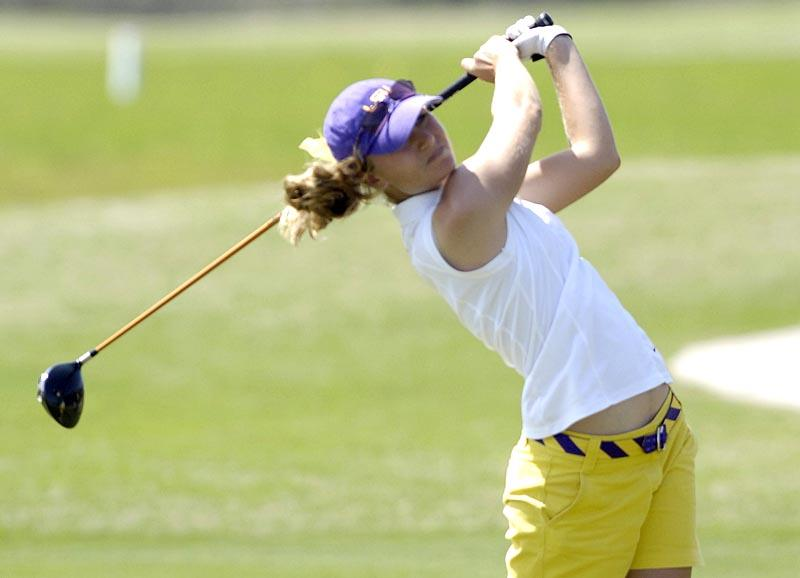 LOUDON, Tenn. — Seven of the nation’s top 20 teams will test their skills on a layout designed by PGA star Greg Norman when the women’s Southeastern Conference Golf Championship begins Friday at the Tennessee National Golf Club outside of Knoxville.

The par-72 course, located between the Great Smokey Mountains and the Tennessee River will play to a par 72 at 6,310 yards.

The 19th-ranked LSU Lady Tigers and the other SEC teams had their look at the course Thursday during the practice rounds and now get ready to tee off in the first round of the 54-hole event that runs through Sunday.

While the fairway grass and rough remains in a dormant state because of cool temperatures, the course may still play long because the fairways appeared during the practice round to be damp in many spots. Outside the cart paths is an out-of-play area with rough and weeds about six inches high. So taking advantage of the wide fairways and staying out of the many pot bunkers and the water that comes into play on 11 holes will be important.

“The bunkers will be brutal,” said LSU Coach Karen Bahnsen. “It’s a good course. I think it’s a course we can score on. We just have to keep the ball in play and in the fairways.”

The Lady Tigers have had one of the better spring semesters in recent years with three runners up finishes, including two of the last three tournaments. LSU will be looking to ride the stellar play of freshman Megan McChrystal and the improved play of senior Rebecca Kuhn at the top of the lineup to get the team out of the seventh place finishes each of the past two years in this event.

McChrystal is ranked eighth in stroke average in the SEC at 74.2 strokes per round and 47th in the country in the GolfWeek/Sagarin performance rankings. Her stroke average entering the tournament is the lowest since 2002 and the fourth lowest for a single season in program history. Kuhn (75.00), with two top five finishes in the last three events, is ranked 100th in the country in the Golfweek/Sagarin.

What has led LSU to more success is the ability to get the all-important third and fourth counting scores from a lineup that has played together most of the year and also includes freshman Amalie Valle (75.42), senior Alexis Rather (75.76) and junior Caroline Martens (76.29).

But the field is not easy from top to bottom as while ranked 19th in the Golfstat rankings, six other teams from the league are ranked ahead of the Lady Tigers ? Florida (5), Alabama (7), Georgia (8), Arkansas (9), Auburn (10), and Tennessee (16).

“Any of these teams, including us can win this tournament,” said Bahnsen, who has the 1992 title to her credit and six runner up finishes in the event. “It’s a case of who is able to get hot and make the shots at the crucial times. There is no reason it can’t be us.”

The Lady Tigers begin play in the final wave off the 10th tee with Arkansas and Auburn and that should be a good barometer for all three teams as to how the tournament will go. LSU’s Martens goes off first for the Lady Tigers at 8:50 a.m. CDT.

Georgia won its 11th SEC Tournament title in 2007, its first since 2001. Taylor Leon of Georgia posted an eight-under par score on the Ole Waverly layout in Mississippi to win the title by four shots.

Live scoring for the event can be found at LSUsports.net and at www.golfstat.com.