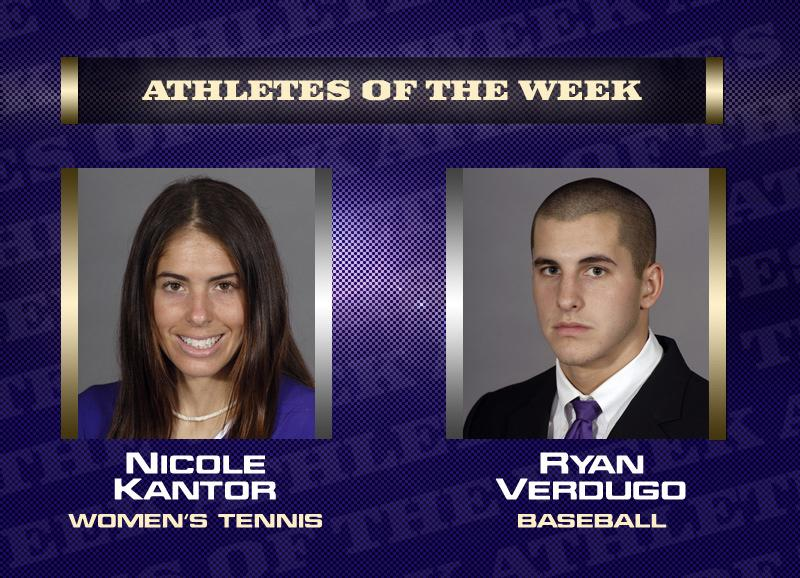 Verdugo recorded the first complete game of his LSU career Sunday as the Tiger’s took down Ole Miss 8-2 in the final game of a three-game series. Called into action just minute before the game because of an injury to right-hander Jared Bradford, who was scheduled to start, Verdugo held the Rebels to just two runs on three hits for the game. The award is Verdugo’s second this season.

The Tigers will host #13 Georgia this weekend in a three-game series at Alex Box Stadium.

Kantor, a sophomore from St. Louis, Mo., turned in the best week of her career as she won her match in a 5-1 win over Mississippi State on April 9 then clinched both doubles and singles in the Lady Tigers’ upset over 15th-ranked Arkansas on Saturday. Her performance was enough to earn her SEC Women’s Tennis Player of the Week this week.

In both singles matches Kantor lost the first set before coming back to win in three. For the season, Kantor posted a 5-1 home record in SEC play and a 9-3 record in dual play at the No.4 position in singles.

The team travels to Auburn this week to compete in the SEC Tournament.

Recorded the first complete game of his LSU career Sunday in the Tigers’ 8-2 win at Ole Miss . . . Verdugo wasn’t scheduled to start the game; however, when right-hander Jared Bradford encountered problems with a blister on his hand during pregame warm-ups, Verdugo was called into action just minutes prior to first pitch . . . he responded with an outstanding effort, limiting the Rebels to two runs on three hits in nine innings with two walks and two strikeouts . . . the complete game was the second by an LSU pitcher this season ? the other was recorded by Bradford at Florida on March 30 . . . Verdugo also started Wednesday’s game at Southern Miss and pitched three shutout innings in the Tigers’ victory ? for the entire week, Verdugo worked 12 innings and posted a 1.50 ERA, allowing just two runs on five hits with three walks and five strikeouts.

When LSU resumed play against Mississippi State on April 9 after a five day postponement, she was down a set to Elna de Villiers, 2-6, 4-2. However, Kantor carried that 4-2 lead in the second set to a 6-4 victory followed by another 6-4 triumph in the third set to push the final margin to 5-1 LSU.

Against 15th-ranked Arkansas on Senior Day, she was instrumental in the upset by clinching doubles and singles. Kantor and Staten Spencer clinched the doubles point with a tiebreaker victory over Audrey Bordeleau and Anouk Tigu on court 3, 9-8(6). Kantor and Spencer were down match point, but they fought back to pull out the win and grab the momentum.

In singles, LSU held a 3-1 advantage with three tight matches left. Kantor fell 6-3 in the first set to Maryori Franco, but she recovered and cruised past Franco, 6-3, 6-2 to clinch the match and the upset victory for the Lady Tigers. Kantor finished 5-1 at home in SEC play and is now 9-3 in dual play at the No. 4 position in singles.