Men's Golf Set for Round 1 of SEC Championships 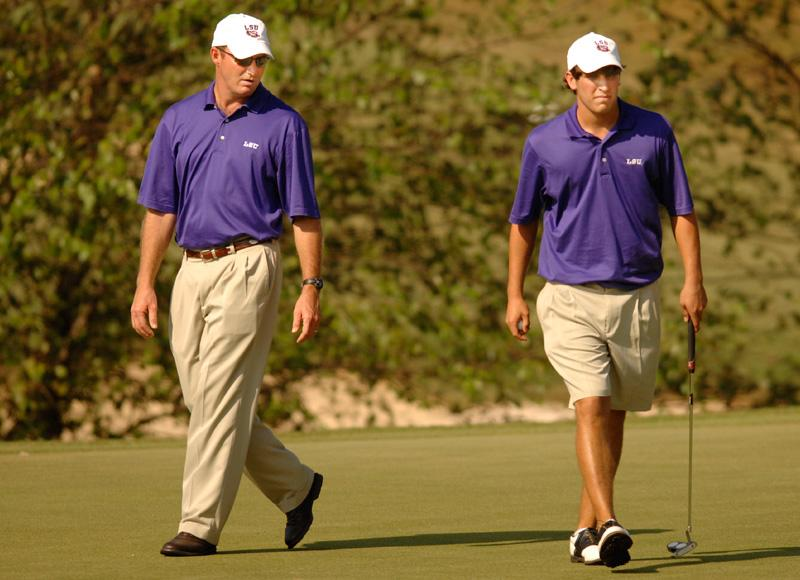 ST. SIMONS ISLAND, Ga. — The Tigers wrapped up their preparation for the 2008 SEC Men’s Golf Championships with a practice round Thursday at Frederica Golf Club and will tee off in the nation’s most competitive conference tournament Friday at 7 a.m. CDT.

This marks the eighth straight year that the championship returns to St. Simons Island, but this is the first time that Frederica Golf Club will play host to the 54-hole event as it was previously held at the Seaside Course at nearby Sea Island Golf Club from 2001-07.

The course, which was designed by world-renown golf course architect Tom Fazio and opened in 2005, will play to a par 72 and a lengthy 7,217 yards for the three-day championship.

“This is a new golf course for everyone in this tournament, and we had never even seen the course until our practice round today,” said LSU head coach Chuck Winstead. “It’s a big golf course that doesn’t have a lot of rough. It’s similar to Seaside in that the greens are large, they’re elevated and they have fall offs to tightly mown areas around the greens.

“I know a number of PGA Tour players come over and prepare on this golf course prior to The Masters. It’s something that we don’t see every day, but we’ve scheduled some tournaments that have prepared us a little bit for what we will see this weekend.”

Only one Tiger enters the weekend with past experience competing in the SEC Championships as sophomore Bryant Lach cracked LSU’s starting five as a freshman a year ago.

Lach finished last year’s championship in the tie for 45th place after posting a 54-hole score of 19-over par 229 at the par-70 layout at the Seaside Course. Lach has proven to be the most improved player on the team this season as he has cut nearly four strokes off his scoring average from 2007.

The Tigers are competing with the same lineup that fired an 8-under par 856 to earn a runner-up finish at the Bank of America Intercollegiate in Jackson, Miss., two weeks ago. Junior Jarrod Barsamian and freshmen Andrew Loupe, John Peterson and Clayton Rotz will get their first taste of what it’s like to tee it up in the SEC Championships this weekend.

Loupe continues to lead the team with a 73.5 stroke average in nine tournament starts and is fresh off of his second Top 10 finish of the season after tying for eighth place at the Bank of America Intercollegiate. Peterson earned his first career Top 10 by tying for fifth in Jackson.

“This will be a new experience for many of our guys, and I know they’re excited about playing,” Winstead said. “Our freshmen have played pretty much all year long, and Bryant Lach has really come on strong this spring semester. He’s made as much improvement over the year as anybody on this team. Our practice round went well today, and we’re excited about teeing off tomorrow.”

The Southeastern Conference has proven to be the strongest conference in all of college golf once again in 2008 as seven teams enter the tournament ranked in the latest Golfstat Top 25.

The SEC features the most ranked teams of any conference in the country as the ACC is second with five, while the Pac-10 Conference has three and the Big 12 Conference has just two.

Top-ranked Alabama is the favorite entering the weekend as the squad leads the nation with five tournament victories on the season. The championship also features the likes of No. 4 Georgia, No. 9 Florida, No. 10 South Carolina, No. 12 Tennessee, No. 15 Auburn and No. 21 Ole Miss.

If the talent in this year’s field were not already deep enough, three other teams will open play ranked among the nation’s top 50, including the Tigers at No. 37, Arkansas at No. 38 and Mississippi State at No. 44. Vanderbilt (52) and Kentucky (53) will also be competing this week.

“This conference has proven year in and year out that it is the most competitive in the college game, and it’s only getting better,” Winstead said. “There isn’t another conference in the country that you can say has this many teams that have a chance to tee it up and win the golf tournament. That’s probably the main thing that makes an event like this so exciting to be a part of.”

The Tennessee Volunteers are looking to defend their team championship after securing a two-stroke victory over Alabama a year ago. The Vols posted a 54-hole score of 29-over 869 at the Seaside Course to win their first conference championship since 1990.

Auburn senior Patton Kizzire returns to defend his individual crown after taking medalist honors by a comfortable four strokes over Tennessee’s Chris Paisley and Tino Weiss with a 1-over 211.

The Tigers will tee off in the first wave of tee times beginning at 7 a.m. as they are paired with Ole Miss and Kentucky in Friday’s opening round. Live scoring for all three rounds of the 2008 SEC Men’s Golf Championships will be provided by Golfstat and can be found by logging on to the organization’s official website at www.golfstat.com.