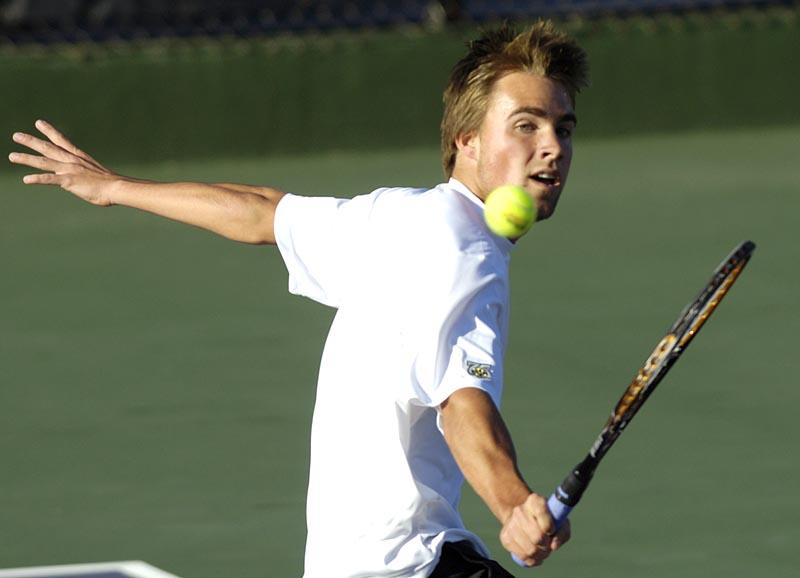 FAYETTVILLE, Ark. — The 18th-ranked and sixth-seeded LSU men’s tennis team is set to face 11th-seeded Mississippi State in the opening match of the Southeastern Conference Tournament on Thursday at 8:30 a.m. in the George M. Billingsley Tennis Center.

The Tigers (13-7, 6-5 SEC) closed out the regular season by capturing a 5-2 road victory against Arkansas last Saturday.  LSU has won four out of its last five matches.

The Bulldogs (8-11, 2-9 SEC) finished the regular season with a 4-3 loss at seventh-ranked Ole Miss on Saturday. Per Nilsson is in his first year as head coach of the Bulldogs.

The Tigers and Bulldogs met on April 4 in Starkville, Miss., where the Tigers came away with a 5-2 victory. LSU has a dominating lead in the all-time series against Mississippi State with a 42-15-1 record.  Last time LSU and Mississippi State squared off in the tournament was in the 2006 first round with the Bulldogs winning 4-2. The SEC West foes have battled three times in the conference tournament with the Bulldogs winning twice.

“Arkansas just put $4 million in their facility and if you have to be on the road it is a nice place to play,” LSU head coach Jeff Brown said.  “On paper, Mississippi State is No. 54 and we are No. 18 so it is presumed we should win easily but in the SEC every match is tough. Last week they played seventh-ranked Ole Miss to a 4-3 match. It should be a tough contest for us.”

“It has been a very strong year for our conference, “Brown commented. “We are ranked No. 18 yet there are four SEC teams ranked ahead of us.”

LSU hosted the conference tournament last season and defeated Tennessee, 4-2, in the quarterfinals. LSU fell to the tournament champ Georgia by a 4-1 score in the semifinals. LSU owns a 5-1 record in first-round contests.

Freshman Sebastian Carlsson leads the team in wins with 25 and 20 of his victories have come in straight sets. Carlsson’s 25 wins are the second most for a freshman in Brown’s 11 years as coach. The four-time SEC Freshman of the Week is on a five-match win streak.

Two other Tigers have posted more than 20 wins this season. Team captain Kevin Dessauer owns a 20-10 record and has gone an outstanding 15-3 in dual play.

After playing at the five spot last year, senior Jan Zelezny has been playing among the top two spots this season and has collected 20 wins. Zelezny is listed at No. 110 in the national rankings.

The Tigers have continued their tradition of strong doubles play as they have captured the early point in 15 of their 20 matches this season. Cluskey and Venus have been the top LSU doubles duo with a 13-4 record, including four victories against ranked teams.

The Tigers hope their tournament performance is strong enough to rank them among the top 16 teams. The top 16 teams are usually selected to host the first and second rounds of the NCAA Tournament.

“Obviously our goal is to win the tournament title but we also hope to host the first two rounds of the NCAAs,” Brown commented. “We have to advance and have a strong showing at the tournament to do that.”