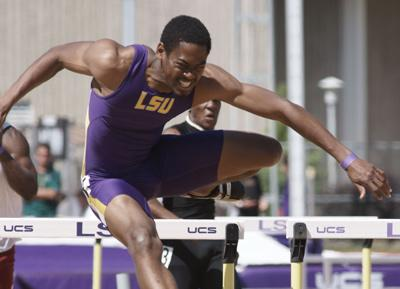 BATON ROUGE ? Senior Ryan Fontenot has been a standout on the track and in the classroom throughout his career at LSU and was honored with the Jesse Owens Athletic Award on Sunday at the 23rd-annual Black Scholars Awards Program.

The program, which was held at the Carl Maddox Fieldhouse, recognized African-American students from each college on campus that excel both inside and outside the classroom.

Fontenot was presented with this year’s Jesse Owens Athletic Award for having the highest grade-point average of all African-American student-athletes at LSU. He has maintained a 3.94 GPA in biological engineering during his four-year career with the Tigers.

“I’m so proud of Ryan and all that he has accomplished this season,” said LSU head coach Dennis Shaver. “He is one of the hardest working individuals both on and off the track that I’ve had the opportunity to coach at this level, and he’s certainly deserving of this award. He’s exactly the kind of student-athlete we want representing our program here at LSU.”

Fontenot is a three-time member of the SEC Academic Honor Roll, while he was also named to the ESPN The Magazine Academic All-District VI First-Team following the 2007 season.

In addition to his success in the classroom, Fontenot has enjoyed a record-setting senior season on the track as he competes as the Tigers’ top sprint hurdler.

The Jesse Owens Athletic Award bears the name of arguably the greatest track and field athlete to ever compete in the sport. Owens was an eight-time NCAA champion at Ohio State from 1935-36 and is the only collegiate athlete to win four NCAA titles at two separate championship meets.

The defining moment of Owens’ career came at the 1936 Olympics on Nazi-controlled Berlin, Germany. He became an inspiration to all when he shattered Adolph Hitler’s myth of Aryan superiority by winning four gold medals in the 100-meter dash, 200-meter dash, broad jump and as a member of the 4×100-meter relay.

President Gerald Ford presented Owens with the United States Medal of Freedom in 1976, which is the nation’s highest civilian honor. He continued to serve his country and amateur sports until his death on March 31, 1980.