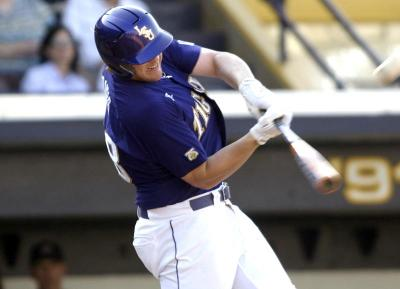 The Tigers (23-13) extended their winning streak over Nicholls State to 17 games. The Colonels dropped to 6-30 on the season with Tuesday’s loss.

LSU will seek its third straight win Wednesday night at 6:30 p.m. as the Tigers travel to New Orleans to face the UNO Privateers.

The LSU-UNO game can be heard on the LSU Sports Radio Network (WDGL 98.1 FM in Baton Rouge), and live audio and video will be available in the Geaux Zone at www.LSUsports.net.

Davis, who finished 1-for-2 with a walk, ripped an opposite-field shot over the right field wall in the fourth inning to plate three runs. The home run was the junior college transfer’s second of the season.

“I am so happy for Taylor,” LSU coach Paul Mainieri said. “He hasn’t had very many opportunities, but he’s had a tremendous attitude, and everyone on the team loves the kid.

“I wanted to give him an opportunity, and he did well. It might lead to some more opportunities.”

Outfielder Nicholas Pontiff recorded two hits, including a bases-clearing double in the eighth to break the game open.

The Tigers tallied an early run in the second inning with some help from the Colonels. Outfielder Johnny Dishon reached second after first baseman Brandt Boudreaux dropped a pop fly. Dishon advanced to third when Breaux’s pickoff attempt went sailing into center field. Davis followed with an RBI sacrifice fly to give LSU an 1-0 lead.

LSU increased its lead to 4-0 after Davis’ dinger in the fourth inning.

The Colonels cut the deficit to 4-2 in the sixth when left fielder Shane Barksdale connected on his second home run of the season.

The Tigers added a run in the seventh and exploded for six runs in the eighth to thwart any chance of a Colonels’ comeback.

LSU right-hander Anthony Ranaudo, a true freshman making his first appearance of the season Tuesday night, retired three straight batters in the ninth to close out the game.