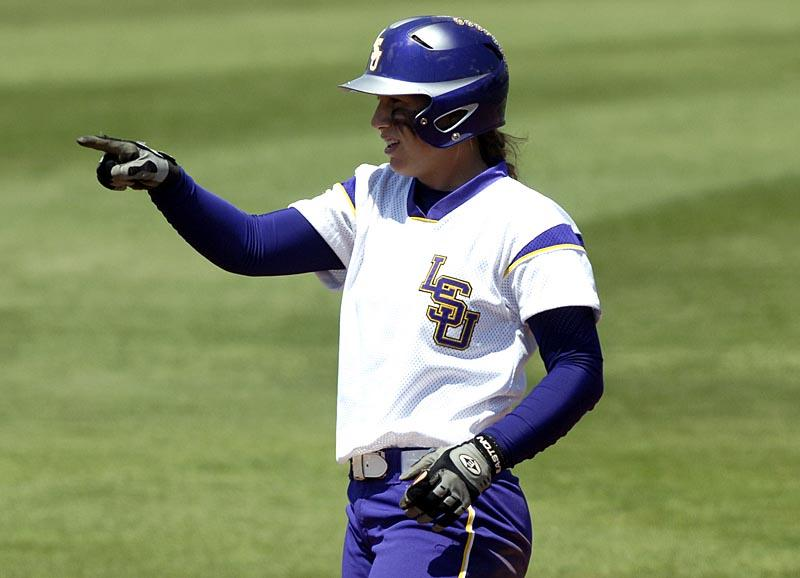 BATON ROUGE — The 14th-ranked LSU softball team will step out of Southeastern Conference play on Wednesday to host in-state rival Nicholls State at 6 p.m. at Tiger Park as fans have the chance to win a FREE pair of Crocs shoes.

The first 500 fans who enter the gates will have a chance to win a FREE pair of LSU Crocs. During the game, 100 pairs of the super comfortable, light as air shoes. The game can be heard on the LSU Radio Network in Baton Rouge on The X – 104.5/104.9 and in the GeauxZone. Live statistics will also be available on the official LSU athletics website, LSUsports.net.

The Tigers went 3-2 last with a doubleheader sweep at Kentucky and a 2-1 series loss to Ole Miss last weekend. LSU recorded 11 runs in the sixth inning of the first game against the Wildcats as part of a 13-2 win. The Tigers went on to take the doubleheader with a 5-2 win in game two. LSU then began the weekend series with an 8-5 win over the Lady Rebels. Unfortunately, the Tigers then dropped the last two games, 3-1, and 2-0, to end the weekend.

“We’ve got to find our swagger again,” said LSU head coach Yvette Girouard. “We lost it at some point and haven’t been able to get it back. We have to stop thinking about getting on a winning streak and concentrate more on taking it one pitch at a time and one inning at a time.”

Nicholls State sits at 25-21 on the season and has won nine of its last 10 games. After losing a doubleheader to Texas-San Antonio on March 29, the Lady Colonels went on a eight-game winning streak that was snapped on Saturday with a 6-5 loss to Stephen F. Austin in 13 innings. Nicholls rebounded with a 2-1 win over the Ladyjacks last Sunday.

“These games against in-state schools are always a challenge,” said Girouard. “We know that we will always get a team’s best shot and we have to rise to that challenge.”

LSU is 108-5 (.956) all-time against in-state schools, including a 5-0 record this season. The Tigers have defeated Nicholls State three times already this season, with two wins coming at Tiger Park and one coming in Thibodaux. LSU knocked off the Lady Colonels twice at Tiger Park in the Easton Tiger Classic, 9-1 in six innings, and 9-2 in the championship game, before winning, 3-0 on the road.

Cody Trahan earned the win in the first meeting with the Lady Colonels this season, as LSU set a new school record with 10 stolen bases. In addition, the Tigers got home runs from Quinlan Duhon, Erika Sluss and Shannon Stein. In the second meeting, Dani Hofer earned the win while LSU posted four doubles and a triple with four stolen bases. In the meeting in Thibodaux, the Tigers Rachel Mitchell hit a home run as Casey Faile earned the complete-game shutout win.

Mitchell took over the team lead in batting average this past weekend. The sophomore is hitting at a .362 clip with 11 doubles, two triples and five home runs. In addition, Mitchell leads the team with 30 runs scored and is second with 30 RBIs, while ranking third with 10 stolen bases.

Killian Roessner leads the Tigers with nine home runs and is tied with Mitchell for the team lead in doubles. The senior All-American catcher also leads the team with 37 RBIs and ranks second nationally with five sacrifice flies. Dee Dee Henderson leads LSU with 27 stolen bases and is one of only two LSU players in school history to record over 100 career steals.

As a team, the Tigers are hitting at a .280 clip for the season with three starting hitting over .300 and seven hitting over .250. LSU has posted 53 doubles with seven triples and 37 home runs on the season. Averaging almost five runs a game, the Tigers have also stolen 83 of 93 bases and boast a fielding percentage of .974.

Kathryn Harrell leads Nicholls state at the plate with a .405 batting average, the only Lady Colonel hitting over .300 for the season, while recording 11 doubles, five triples, two home runs and 12 RBIs. Amy Thibodeaux leads Nicholls with 12 of the team’s 23 total home runs and boasts a team-high 30 RBIs. As a team, Nicholls State is hitting .250 on the season with 48 doubles, seven RBIs and 23 home runs. The Lady Colonels have scored 173 runs, while stealing 44 of 54 bases with a fielding percentage of .963.

This weekend, the Tigers will return to the road as LSU travels to take on top 10-ranked Tennessee. It marks the third week in the last month that the Tigers have faced a top 10 team on the road in conference play. LSU will face the Lady Vols in a doubleheader on Saturday beginning at noon CDT and the pair will conclude the series with a single game on Sunday at noon. The first and third games of the series will be televised on Fox Sports in Baton Rouge on cable channel 38.

INTERNET: Live stats, audio and streaming video in the Geaux Zone at LSUsports.net