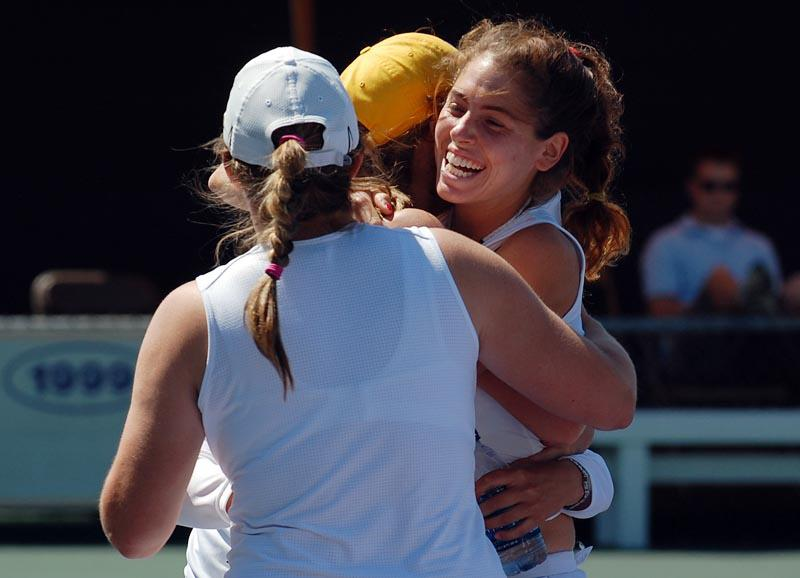 BATON ROUGE — For her efforts against Mississippi State and 15th-ranked Arkansas last week, Nicole Kantor of the LSU women’s tennis team was named Southeastern Conference player of the week by the league office on Tuesday.

The honor marks the first time in her career that Kantor, a sophomore from St. Louis, Mo., has been named the player of the week.

Against Mississippi State on April 9, Kantor picked up a three-set victory in singles over Elna de Villiers, 2-6, 6-4, 6-4. Kantor’s victory pushed the final margin to 5-1 LSU.

In the upset win over then-No. 15 Arkansas, Kantor was instrumental in the Lady Tigers’ victory by clinching both the doubles point and the overall match.

In doubles, Kantor and Staten Spencer fought off match point against Audrey Bordeleau and Anouk Tigu to win in a tiebreaker, 9-8 (6). The win gave LSU the doubles point and the momentum. With LSU leading 3-1, Kantor fought back from a set down to knock off Arkansas’ Maryori Franco and clinch the victory, 3-6, 6-3, 6-2.

With the two singles victories against Mississippi State and Arkansas, Kantor finished the regular season with a 5-1 home record against SEC foes.

Megan Falcon jumped six spots in the singles rankings to No. 12. Against Arkansas, Falcon defeated then-No. 1 Aurelija Miseviciute of Arkansas in straight sets, 6-3, 6-1 to avenge an earlier season loss to the Lady’Back.

On the season Falcon is 17-3 in dual play and 25-5 overall. The win over Miseviciute increased Falcon’s ranked win total to 11.

After defeating Arkansas’ No. 24 ranked duo of Miseviciute and Ela Kaluder, Falcon and Mykala Hedberg moved up seven spots to No. 22 in the nation. The Lady Tiger tandem is 11-4 on the season, including a 5-2 record against ranked competition.

LSU will be back in action on Thursday against Alabama at 10 a.m. at the SEC Tournament hosted by Auburn at the City of Auburn/Auburn University Yarbrough Tennis Center.